Skip to content
Home > TN > Knoxville > Where to Live Now > 8 Reasons To Move to Knoxville, Tennessee

8 Reasons To Move to Knoxville, Tennessee

Knoxville is consistently ranked among the most livable cities in America because of its big city amenities and small-town charm. Read on to discover 8 reasons why. 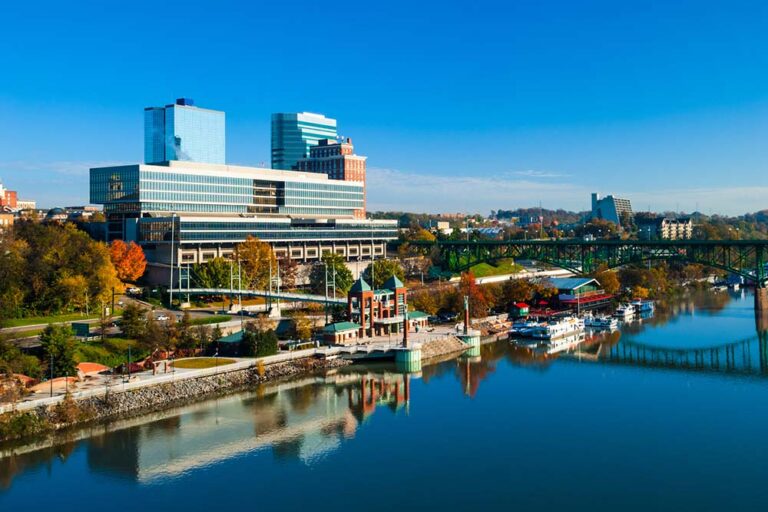 Knoxville, Tennessee, boasts a growing job market, an affordable cost of living and a friendly, welcoming feel. These reasons (plus a few more) earned it a spot on Livability’s Top 100 Best Places To Live in 2022.

As a community that offers big city amenities with small-town charm, here are 8 reasons to move to Knoxville, TN.

“It’s still possible for a recent college graduate to come here, get a good job, and be able to plant themselves and their roots and stay here without having to sacrifice quality of life like you do in some other cities,” says Nadim Jubran, vice president of Capstone Concepts, part owner of One Knox Soccer Club, Knoxville Chamber board member and all-around fan of Knoxville.

But Knoxville’s affordable living goes beyond housing. There are ample ways to have fun that are low cost or even free. The city is surrounded by natural beauty, from its Urban Wilderness to the Great Smoky Mountains National Park, the nation’s most visited park, where people can bike, hike or paddle. There are multiple community events and festivals year-round, too.

“Nashville was never even a consideration for us — and Knoxville is generally more affordable than most of the greater Nashville area,” says Tyler Janow, business owner and president of the Young Professionals of Knoxville. “Our membership is around 300 people and of that, about 60% are transplants.”

There are opportunities to advance your career.

Knoxville is a powerful economic engine for East Tennessee, with a diverse economy. In July 2022, Knoxville’s unemployment rate was 3.5 percent, in line with the national average.

Several brands you may recognize have a significant footprint in the Knoxville area including TVA, Pilot, Bush Brothers and The Tombras Group. Organizations including Oak Ridge National Laboratory, the Y-12 National Security Complex are a brief commute away.

Some of the city’s biggest employers include the University of Tennessee system (including its medical and research laboratories) and Covenant Health.

Growing industries in the area include the health care, IT, entertainment, finance and sustainability sectors.

Knoxville feels like it’s tucked away in the Smokies, but it’s located within a day’s drive of many bigger cities.

It’s less than 8 hours’ drive time to Washington D.C., less than 7 hours to Richmond, less than 4 hours to Charlotte, 3 hours to Atlanta and 2 hours to Nashville. Some 60% of the nation’s population lives within that range, making airports and other amenities easy to access.

The closest beaches, in South Carolina and Florida, are accessible within a day’s drive, and Knoxville offers easy access to the mountains, which are right in its backyard.

There’s always something fun to do in Knoxville, which has events year-round to bring the community together.

The University of Tennessee’s football and basketball teams, the Volunteers, draw enthusiastic crowds ready to root for the home team.

Knoxville is a stop on the tour circuit for most major talent, from music to comedy, plus loads of local performers playing in all sorts of venues around town. There’s also a new stadium in the works in the Old City that’s slated to open in 2024.

The dining scene is incredible.

With the backbone of the Appalachians running through it, Knoxville’s dining scene is unique.

“We’ve been the beneficiary of some of the talent from Blackberry Farm (a world-renowned luxury resort located in nearby Walland, TN), who have opened their own restaurants downtown, and they wouldn’t be here without the deep belief in Appalachian history and its food,” says Jubran. “In general, Americans have a bigger desire to have more flavor, more tastes, and to be more exploratory, and Knoxville is definitely within those bounds.”

There are 75 restaurants on downtown Knoxville’s Gay Street alone, but it’s not only Southern cuisine — the area boasts plenty of diverse global flavors from Ethiopian to Colombian and everything in between, plus a robust farm-to table-scene.

“I’ve been to many larger U.S. cities and compared the restaurants there to the quality of my favorite restaurants in the Knoxville area, and you just can’t beat our experience here,” says Janow. “We have several James Beard Award-winning chefs that are always generating new concepts … you have about 150 restaurants within a mile and a half in the downtown area.”

The scenery is stunning — and accessible.

“Everywhere you go, you’re in proximity to (the mountains),” says Janow. “You can see the Smoky Mountains in the distance from almost anywhere.”

The park is just an hour away, but you don’t even have to go that far. Nearby Townsend offers glamping opportunities that feel a world away within a short drive, and the Urban Wilderness offers several interconnected parks, historical sites and natural scenery spanning over 1,000 acres connected by hiking and biking trails. Easy river access makes stand-up paddle boarding, kayaking, boating and swimming a cinch.

Incorporating nature and outdoor recreation into your daily life is easy in Knoxville.

“We have lots of outdoor recreation opportunities in and around Knoxville. We have the Urban Wilderness and we have a pretty decent climate,” says Jubran. “We’ve got natural assets that many communities would just die for.”

‘Makers’ can make it here.

In 2016, Knoxville became the first designated Etsy Maker City, with an entrepreneurial ecosystem that supports creative businesses. The goal of designating a Maker City is to connect creators to local government entities that support entrepreneurs, sustainability and responsible manufacturing, as well as create opportunities to help them expand their enterprises.

Created under the leadership of the Mayor’s Maker Council and the Knoxville Entrepreneur Center, the Maker City hosts an annual summit as well as ongoing meetups where makers share knowledge and tools to grow their businesses. The maker directory helps connect consumers with handmade goods, retailers with locally made items to sell and businesses with small-scale manufacturers and fabricators.

“It’s been a part of the package for many people coming here — the excitement around us being a place for makers has encouraged a lot of people to relocate here,” says Janow. “Maybe they had a side hustle that has become a bigger deal for them now that they’re living here — it encourages people to follow their entrepreneurial spirit.”

It’s easy to find your tribe.

People in Knoxville are known for being genuinely kind and welcoming.

“People’s doors are still open in the sense that you can reach out to people you wouldn’t think have the time, but they do,” says Jubran. “You can’t make as much progress in bigger cities, because people aren’t as interested in connecting.”

Even though the city is experiencing an influx of transplants from around the country, finding your tribe here is easy.

“It’s hard to find people in Knoxville who are not warm, as a community — I think hospitality is just a huge thing and it’s just part of what we’re bred to do,” says Janow. “When you think of East Tennessee, you don’t necessarily think welcoming, liberal or diverse, but when you’re talking about Knoxville in particular, those things are true. We’re very welcoming and celebrate diversity and inclusion.”