Explore the Amazing Artworks of Tennessee

Sure, the Volunteer State is known for its spectacular scenery, but get ready to be dazzled by its vast array of public art. 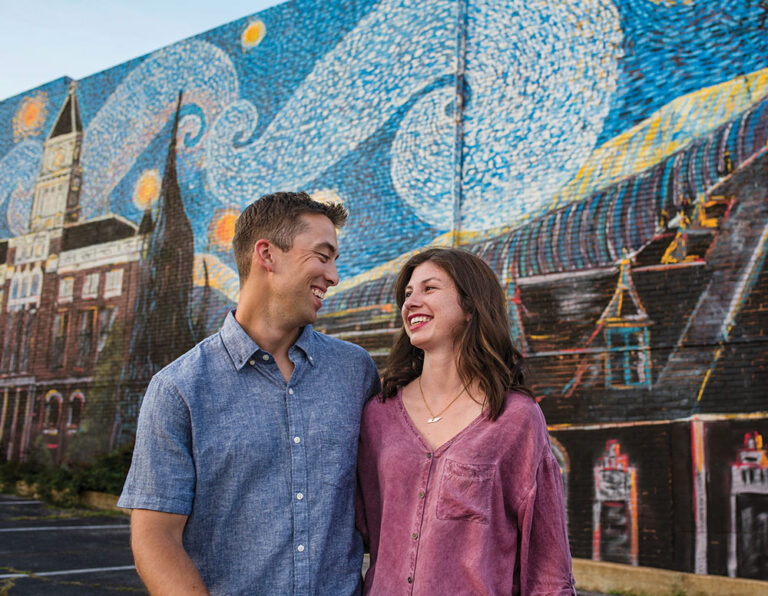 Tennessee’s musical heritage makes it a home for creatives, but it’s not just music that draws talented people. The visual arts in Tennessee are also alive and well, with public art becoming more visible in many communities.

One of the communities is Johnson City, which now has a 14-member Public Art Committee that oversees the selection of artworks and where to install them outdoors at public places. The committee is composed of artists, architects, landscape designers, curators, interior designers, urban planners and engineers who live in Johnson City.

To this point, six murals and two sculptures are on display in Johnson City, with plans for many more. Also showcased are a variety of art images wrapped around three traffic control boxes at key intersections, with the first one posted at the busy corner of West Fairview Avenue and North Roan Street.

In Chattanooga, a mayor-appointed Public Art Chattanooga commission reviews and approves all projects, and the city has won national art awards for its standards of excellence.

Chattanooga now has more than 100 permanent outdoor artworks in its collection, and multiple sculptures are on display in areas like Northshore, Riverfront, Southside, City Center and Bluff View/First Street.

In the Volunteer State, you’ll find plenty of great places to live. Here’s a sampling of several hometowns worthy of your consideration.

Clarksville also embraces the creative spirit, with interesting sculptures, murals and fountains adorning the city’s streets, buildings and trails as well as throughout the Austin Peay State University campus.

Some of the most popular pieces have names like Wilma Rudolph Statue, Pat Head Summitt Statue, APSU Wall Mural, Bursting with Pride Mural and Children’s Fountain.

Murals in Columbia and Jackson

A visit to downtown Columbia provides guests with views of street-art murals that pop out throughout the district, and many are so interesting that they’ve become destinations for taking selfies.

Highlight pieces near the downtown public square go by names such as Columbia Mural, Fire Department Mural, Lady Justice, Mule Queen Mural and a Martin & Vaughn Ghost Sign, and a few miles from the district are three individual outdoor sculptures on the campus of Columbia State Community College.

And in Jackson, a mayor’s Public Art Initiative was launched a couple years back and has already resulted in a Love Your Neighborhood Mural at North Highland Avenue and College Street along with a Unity Mural at the intersection of Liberty and Main streets. Recently, a third mural titled “Southwest TN” was painted and unveiled on the north wall of the Southwest Tennessee Development District building in downtown Jackson.