In the Volunteer State, you'll find plenty of great places to live. Here's a sampling of several hometowns worthy of your consideration. 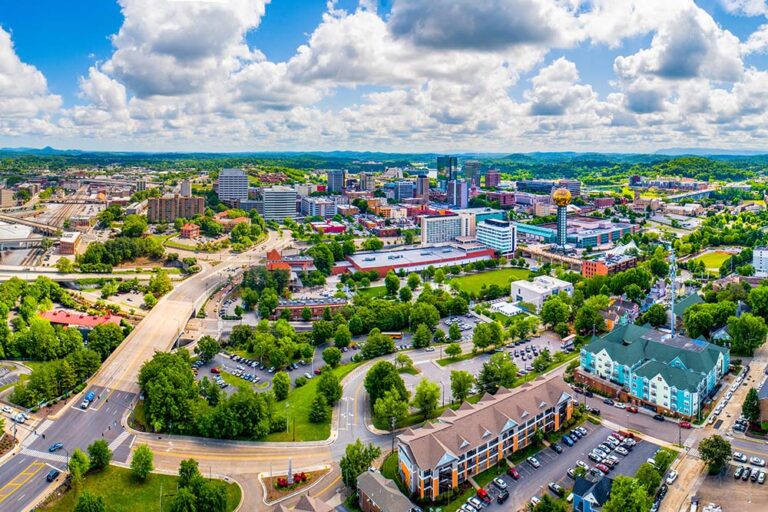 If you’re looking for a hometown where you can get to know your neighbors, consider moving to Tennessee. Its four-season climate and scenic, friendly communities are bringing record growth to the Volunteer State, growing by 8.9% in 2020 alone, according to the U.S. Census Bureau.

Tennessee Is Affordable (and Workable!)

You can afford to live in Tennessee, where you can find a lower cost of living and housing costs at 79% of the U.S. average. Job opportunities also abound, with the state adding more than 380,000 jobs between 2010 and 2020.

“We are seeing a lot of investment in rural and suburban communities,” Williams says. “People are looking for more space both outside and indoors, and they want a bigger place to live and more time at home.”

Thankfully, it’s also easy to get out and around in Tennessee. With eight interstates, Tennessee delivers mean travel times that fall below the U.S. average. Its impressive roster of communities along every mile invites you to stop by and maybe stick around forever.

Here’s a small sample of what the state has to offer:

When most Tennesseans think Knoxville, the University of Tennessee comes to mind — one of the city’s largest employers and a source of statewide pride. But locals know there is much more to the third largest city in the state.

Visitors and Knoxville’s 190,000+ residents enjoy places like the Ijams Nature Center and the Tennessee Theatre, along with a vibrant food and music scene. And with a median home value of $300,000, short commutes and large employers like the U.S. Department of Energy and Covenant Health, Knoxville offers the best kind of metropolitan living.

“There’s no better place than Knoxville to raise a family,” says Dave Miller, East Tennessee regional president for First Horizon Bank. “It’s also a great place to run a business. We have a powerful talent pool here, and we’re at the crossroads of two major interstates, which affords easy access to the entire eastern half of the country.”

In Clarksville, history and progress come together along the banks of the Cumberland River. Home to Austin Peay State University and neighbor to Fort Campbell, a U.S. Army post and home of the 101st Airborne Division, Clarksville is also home to more than 220,000 welcoming residents like Kari M. Moore, who moved there in 2010.

“Clarksville can feel like a growing, unrelenting city, but it can also feel like a neighborly small town, and that’s what I love about it,” Moore says. “While I appreciate its rich history, the recreation, and its beauty, what I truly love are its people.”

On the southwest corner of Memphis, Bartlett stands on its own with a growing population close to 60,000 and a median home value around $260,000. In recent years, Bartlett has seen more than $396.6 million in capital investment and more than 2,500 new jobs with major employers like Brother International and Brimhall Foods.

High-quality education options, numerous churches and the region’s premier shopping district are hallmarks of the community. Its ample public parks, farmers market and access to Shelby Farms — one of the largest municipal parks in the nation — are also popular attractions.

Often referred to as the center of West Tennessee along Interstate 40, Jackson is a hub city with more than 68,000 people, blending a neighborly culture with the amenities of larger cities. With housing costs 24.6% below the national average and major employers like Delta Faucet, The Kellogg Co. and Stanley Black & Decker, it’s an attractive place to call home.

Frank McMeen, president of the West Tennessee Healthcare Foundation, has made Jackson his home for more than 30 years. “Jackson has a way of winning your heart,” McMeen says. “What other Tennessee city with a population under 100,000 has its own symphony, three major network TV stations, a cancer center, children’s hospital, major medical facility and community foundation?”

Called the “City by the Lake,” Hendersonville is an engaging community nestled on the shoreline along Old Hickory Lake outside Nashville. Its residents enjoy the perks of lake life like the Bluegrass Yacht and Country Club, golf courses and beautiful parks, along with many dining, shopping and family-friendly entertainment options.

“Hendersonville offers all the amenities of a large city without the problems,” says Brian Silkwood, a certified financial planner with UBS and a 17-year resident. “Hendersonville has great amenities for outdoor activities. Three of the four newest park attractions in the city were citizen-led and funded efforts.”

Home to more than 74,000 residents with median home values of around $280,000, Hendersonville provides careers with employers like Xtend Healthcare, Tristar Hendersonville Medical Center and MGM Industries.

Kingsport sits at the northeastern gateway to Virginia and North Carolina where more than 55,000 residents live, work and play. History buffs flock to places like the Exchange Place living history farm and Rotherwood Mansion, both listed on the National Register of Historic Places. Outdoor enthusiasts enjoy the Greenbelt and Bays Mountain Park.

Families can settle down with median home prices of around $200,000 and work for major employers like Eastman and Ballad Health, to name a few.

“Kingsport’s not too big and not too small, but just right,” says lifelong resident and retired City Manager Jeff Fleming. “It’s big enough to have amenities like an airport but small enough not to have issues with traffic, crime and hypergrowth. Its wide avenues, thoughtful design, unique homes and tree-lined streets create a livability that would make Norman Rockwell proud.”

Voted as one of the nation’s most popular metro areas for raising a family or retiring, Johnson City offers a low cost of living within a thriving city of more than 70,000 residents. Home to East Tennessee State University, Johnson City brings culture and education together near the highly accessible and scenic crossroads of the southern Appalachian Mountains.

Johnson City also offers a median home value of around $249,000 and a business-friendly climate with major employers like Mountain States Health Alliance and Citi Commerce Solutions.

“Johnson City is a great place to raise a family and start a business,” says Keddrain Bowen, founder/ owner of sports apparel and memorabilia company Fanatics 101. “I started my business out of the trunk of my car almost 20 years ago, and I’m grateful for the support I have received here over the years.”