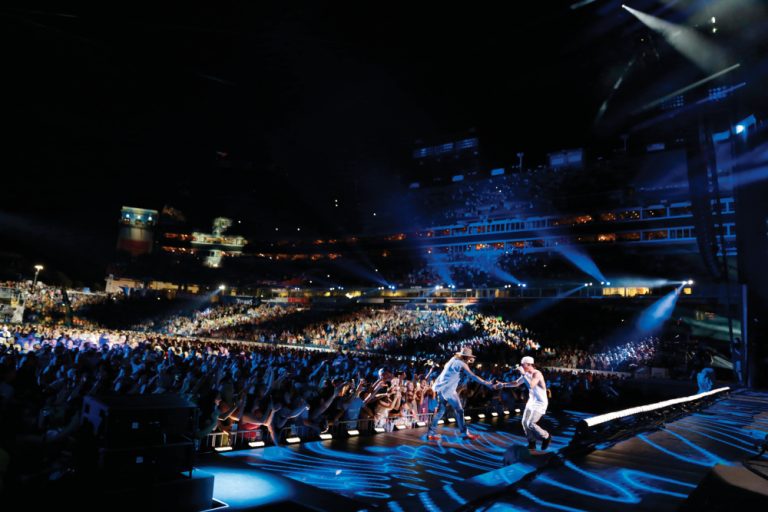 It seems that nearly every day a new statistic or ranking about the Nashville area is released – whether it’s the Census Bureau’s estimate of the number of people moving to the city each day or Livability.com’s ranking of Nashville on its list of the 2019 Top 100 Best Places to Live in the country.

But what brings people to the Nashville area and why do they stay?

For many, like Brandon McIntosh, who recently moved to the region, the quintessentially cool vibe of the city was the main motivator for relocating to Nashville.

“I joke around a lot and say that I’ve never had a bad time in Nashville, but it’s so true,â€ says McIntosh, a loan specialist with Franklin Synergy Bank. “There is a certain feel – a certain vibe – that you just don’t get living anywhere else.”

For others, the decision to move to Nashville ultimately comes down to career opportunities afforded to young professionals.

Alynna Tilley, a hairstylist with her own studio space at Salons by JC, moved here from Oregon nearly two years ago.

“Professionally, moving here opened so many doors for me that I would have never had the chance to experience,â€ says Tilley. “I’ve learned so much in such a short period of time both on the business and creative sides of my industry.”

That blend of creativity and technicality has established the Nashville area as an ideal location for entrepreneurs as well as business giants, like newcomers Amazon, software-based bookkeeping company Pilot.com and Mitsubishi.

“I love that you can truly make a living in the city – whatever you want or need it to be,â€ Tilley says. “There are so many people here chasing their dreams that it’s hard not to be inspired.”

Local Flavor Off the Charts

Attracting talent is one thing but getting transplants to invest in their communities and stay is another. Fortunately, Nashville has figured out how to excel in both, and businesses are taking notice, too.

Sophie Mullin, a business development consultant with Jackson National, was relocated to the Nashville area from the company’s Denver office nearly a year ago and hasn’t missed a beat when it comes to immersing herself in the culture.

“I love all of the concerts and live music venues around town,â€ says Mullin. “I’m a huge foodie, so I love that there are so many amazing restaurants, and even after living here for a year, my list of places to go to is still a mile long!â€

Mullin, like many others, has taken a bite out of Nashville’s burgeoning food scene, which has put the city on the map as a popular foodie destination in recent years. With a slate of award-winning restaurants and chefs that have gained national recognition, including the city’s five semifinalist nominations for the James Beard Foundation’s prestigious 2019 awards, the local flavor is off the charts.

And, of course, Nashville isn’t called Music City for nothing. With 630 arts, culture and humanities organizations in the area and live music available at all hours of the day, it’s easy to see why artists are attracted to the city.

“I’ve always loved the creative spirit of Nashville,â€ Tilley says. “There is always something going on.”

Beyond a vibrant downtown scene, Nashville provides newcomers with several distinctive communities to choose from, each with their own story to tell.

“Plan a trip and really explore the different neighborhoods. I’d be surprised if you didn’t find at least one that makes you feel like you’re in your element,â€ McIntosh advises newcomers. “The list of things to do is unending, and whatever you choose, the city has a casual, welcoming feel that just makes everything comfortable.”