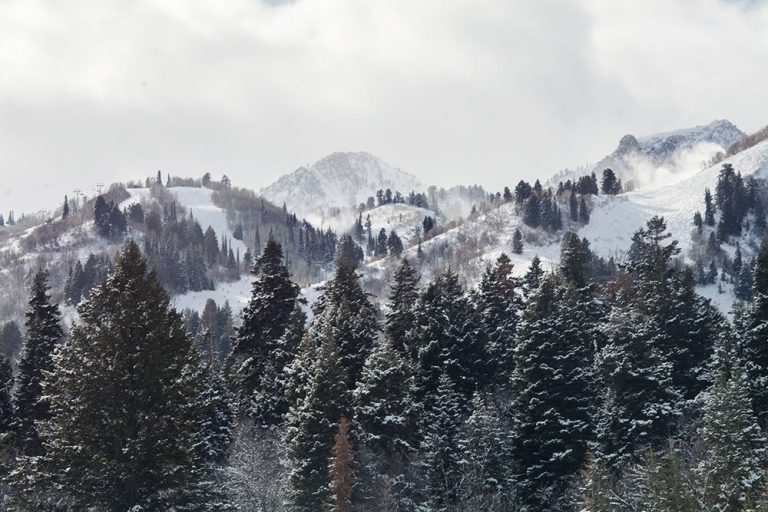 If rising before the sun to get in an early ski run or mountain bike adventure before work sounds like your idea of bliss, the mountains are calling your name. The problem? Living in such close proximity to those beautiful outdoor playgrounds often comes with a hefty price tag.

The good news for those of us lacking a few extra zeroes in our bank accounts? If you’re willing to look beyond the Aspens, Park Cities and Jacksons of the country, there are a number of mountain towns with a cost of living you can actually afford. So lace up those hiking boots and wax those snowboards: from epic scenery and a lively arts scene in Ogden, UT; to Boone, NC’s quaint college town feel, here are five high-altitude cities with surprisingly low price tags.

The gateway to Snowbasin, Powder Mountain and Nordic Valley, this hidden gem, just 35 minutes north of Salt Lake City, sits at 4,280 feet and is adjacent to 170,000 acres of national forest. With a population of 84,000, Ogden is on the smaller side, but when it comes to outdoor adventures, the opportunities are massive. Nestled among the mountains, you’ll find plenty of ski runs (the town hosted three venues during the 2002 Winter Olympics) and hiking and mountain bike trails, plus nearby lakes and rivers for water sports and nearly 40 parks in the area.

And the scenery? There’s good reason more than 45 movies and TV shows (“The Sandlot,” “Everwood,” “Con Air,” “Drive Me Crazy”) have been filmed here. Pair that with a strong local arts scene (First Friday Art Strolls take place monthly; catch live music at the downtown amphitheater; find annual events ranging from Pioneer Days to the Blues & Brews Festival to a Christmas Village); great shopping along Historic 25th Street; and great dining options, breweries and distilleries for a well-rounded experience. At one point, Utah’s oldest city was home to more millionaires per capita than any other place in America, but the current median home cost is just $188,100, compared to $354,300 in nearby Salt Lake City. And recent job growth has increased by 2.8 percent (higher than the national average of 1.6 percent) with manufacturing, retail trade and public administration ranking as the city’s leading industries.

Yes, Colorado boasts its fair share of ski resort towns known for drawing the rich and famous: Aspen, Vail, Breckenridge, Telluride and the like. But more and more businesses, tourists and residents are putting down roots in still-affordable Leadville.

Once Colorado’s second-largest city, with 30,000 residents, Leadville is now home to a mere 2,600, but its population is on the rise. Located 100 miles from Denver and resting at 10,150 feet, the nation’s highest-altitude incorporated city is home to 50 historic structures, eight museums and plenty of outdoor adventure options. In the winter, hit the slopes at Ski Cooper, one of the country’s oldest ski resorts, snowmobile the back-country or cross-country ski along the town’s well-groomed trails. Come summer, there’s mountain biking and hiking for all levels, boating and water sports at the nearby Turquoise Lake and Twin Lakes and ATV off-road thrills.

More reasons to live here: The median home cost is $254,000 (in Aspen, it’s $1.4 million), the unemployment rate, at 3.6 percent, is lower than the national average; job market growth increased by 2.6 percent last year and schools have seen recent renovations. Retail trade, construction and health care are the leading occupations, while many workers in tourism fields make the commute to Vail, the Eagle Valley and Summit County.

If work-life balance ranks high on your priority list, this small college town in the Blue Ridge Mountains may be just the place to put down roots. Home to Appalachian State University, Boone offers an adventure-lovers dream year-round, with mild summers (when you can hike, fish, horseback ride, mountain bike, canoe – you name it), snowy winters (find three nearby ski resorts), cool springs and colorful falls.

Named for American pioneer Daniel Boone (you’ll want to take visitors to Hickory Ridge Living History Museum in Daniel Boone Park and “Horn in the West,” the long-time seasonal outdoor drama that tells the story of Boone’s adventures), the population is 18,156 (it nearly doubles when you factor in students), the average home sale price is $220,700, job growth is higher than the U.S. average and education, tourism and retail are the top three employment industries.  Combine the culture and arts scene that comes with the university with a quaint historic shopping and restaurant district, great weather and all those mountain activities for an A-plus experience.

If you’d love to make your vacation spot a year-round residence, this small California town, about a 20-minute drive from San Bernardino, is worth a look. Cool (literally: Surrounded by the San Bernardino National Forest, it’s about 20 degrees cooler than nearby cities), quaint and full of camping, hiking, birdwatching, biking, paragliding and other activities, Crestline also home to Lake Gregory Regional Park and features four seasons. (Tip: For a hike your visiting guests will, well, love, climb to Heart Rock, a natural wonder at a waterfall where a perfect heart-shaped pool was formed into the cliff by the force of water.)

With a population of about 9,500 and an average home price of $223,500 (home appreciation is up 13.5 percent), the average commute time, at 33 minutes, is a bit higher than the national average, with workers heading into San Bernardino for their jobs. (San Bernardino County is adding jobs at a faster rate than counties on the coast, and is a top draw for millennial workers.) But half an hour in the car to live in your vacation paradise? Seems like a fair trade.

Idaho Falls might not be a mountain town in the literal sense, but as the closest metropolitan area to any of Yellowstone National Park’s entrances, it serves as a gateway to some of the country’s most stunning mountain terrain. If the draw of nearby destinations like Yellowstone, Grand Teton National Parks or the Craters of the Moon National Monument isn’t enough to lure you to this small town in Eastern Idaho, maybe the promise of a symphony, opera, museums, zoo and minor league baseball team seal the deal.

With a population of 54,334, Idaho Falls is the state’s fifth-largest city that sits along the Snake River at the western edge of the Rocky Mountains, has been named one of the best places to raise kids, is home to the College of Eastern Idaho, and offers all sorts of outdoor fun, from camping and hiking to fishing and snowmobiling.  Agriculture, specifically Idaho’s famous russet potatoes and wheat, is key here, but so is tech: it’s the home of the Idaho National Engineering and Environmental Laboratory, the country’s premier center for nuclear energy and research development.

Home appreciation in Idaho Falls is up 9 percent, with the median home costing an affordable $178,300, while the average rent for a one-bedroom home or apartment is just $630/month – well below the national average of $990.