Can’t Afford to Live in D.C.? Live Here Instead.

The home prices in D.C. are as steep as they get. Get more bang for your buck in these nearby cities. 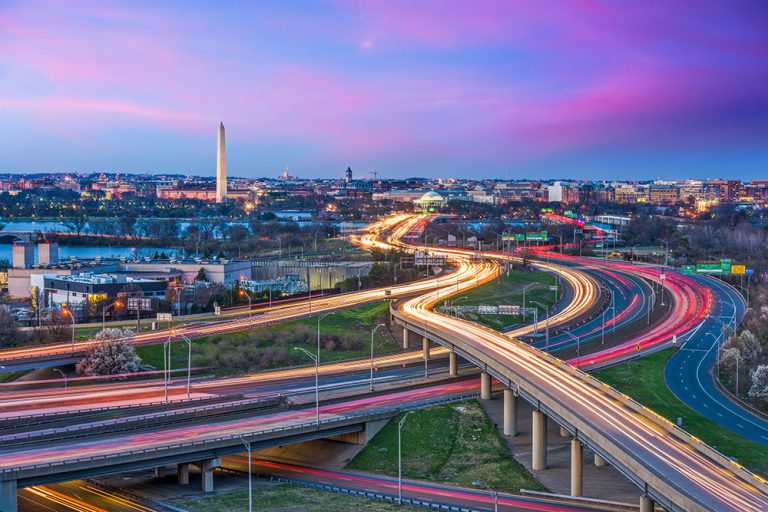 Washington D.C. is more than just the home of the White House. Our nation’s capital is ever-evolving and has become a top destination for folks to settle down or start their careers. Culture, politics, history, a booming job market, and an impressive food scene are just a few things luring people to the District.

However, living in such a thriving and vibrant city does come at a cost, and D.C. is touted as one of the most expensive cities in the nation. According to Payscale.com, the cost of living in D.C. is 39% higher than the national average, and housing clocks in at 148% more expensive than the national average. You can expect to shell out $2,694 a month for rent, and the city’s median home price is a whopping $859,866.

So, you want all the benefits of living in D.C. without having to pay a fortune? Look no further.

Located just 18.7 miles from the District, the city of Fairfax has a lot going for it. Fairfax was ranked as one of the best college towns in the nation in 2016, but it’s also a haven for families thanks to its small-town feel. Take D.C. and get rid of the high living costs and traffic and you have Fairfax. Its central location makes it ideal for commuting into D.C., and it even has its own metro subway stop.

Fairfax is home to George Mason University, the biggest public research university in Virginia, and residents enjoy all the benefits of being a college town, including great nightlife, restaurants, and shopping. Residents also have access to more than 250 acres of parks, and outdoor recreation is endless.

Like D.C., Fairfax is a city rich in history and opportunities, and you really can’t go wrong here!

Great schools, a low crime rate, a plethora of family-friendly activities, and the perfect mixture of urban and suburban make the city of Rockville idyllic for settling down and raising a family.

The city is consistently ranked in the top 10 for best places to raise a family, but Rockville also draws in many young professionals. The town sits smack dab in the center of the I-270 Bio Corridor, a 15-mile stretch of more than 370 bioscience companies, providing ample job opportunities. The Metrorail makes a stop here, as well, so you’re just a quick subway commute into D.C.’s Metro Center.

Like D.C., Rockville is extremely bikeable, as it’s surrounded by the 10-mile Carl Henn Millennium Trail bike beltway. In addition, an abundance of diverse restaurants, parks, coffee shops, and bars, along with lower housing costs than D.C., make Rockville the perfect place to live.

Can’t Afford to Live in Miami? Live Here Instead.

These cities aren’t Miami, but they’re close enough that you can fake it.

Just 21 miles south of D.C. on Belmont Bay and the Occoquan River lies the charming suburb of Woodbridge, VA. This city may be small with a population of 4,373, but don’t let that fool you. Woodbridge is an excellent place for young professionals and families alike, as it offers an excellent school system, a diverse environment, and a low crime rate. Job opportunities in Northern Virginia, especially in the tech sector, are surging, and companies like Microsoft, Google, and Facebook are expanding into the area.

Not only is Woodbridge one of the most affordable suburbs of D.C., but it’s also waterfront. Residents enjoy the stunning surrounds of the Bay, including two beautiful wildlife refuges and Leesylvania State Park.

While there’s plenty to do in Woodbridge, it’s just a quick 30 minute trip into D.C. But why would you ever want to leave?

Dubbed as one of the Top 5 Most Affordable Cities in Maryland, Maryland’s capital city is not one to overlook. One of the biggest draws of living in Annapolis is that it is right on the beautiful Chesapeake Bay. Residents enjoy all the Bay has to offer, including sailing, paddle boarding, and fishing. I mean, where else can you find waterfront living without giving up your life’s savings?

Like D.C., Annapolis is chock-full of history. The city was once called the “Athens of America,” and it served as a colonial capital. It’s also home to St. John’s College, the third oldest college in the country.

Need more? This charming East Coast city has made a name for itself in the food scene and offers foodies anything from upscale seafood restaurants and oyster bars to historic taverns and pubs.

This hip city is known as the gateway to western Maryland. While albeit little further out (just under an hour north of D.C.,) the city of Frederick is ripe with history, charm, and microbreweries.

Frederick also landed a spot on the list of the 2021 Top 100 Best Places to Live, thanks to its affordable home prices and a fairly low overall cost of living. (D.C. is 38% more expensive on average than Frederick.) Because of its affordability, many people choose to live in Frederick and commute to D.C. via the MARC train.

As the second-biggest city in Maryland, residents enjoy the positives of living in a bigger city with a small-town vibe. A vibrant downtown offers all of the amenities you’d expect in a bigger city, while great schools and lots of nearby green spaces give the city a suburban feel. It’s truly a win-win!

The city of Frederick is also unique and is bursting at the seams with artistic opportunities. Theaters, art galleries, museums, and public art pepper the city, while one-of-a-kind shops and delicious restaurants and microbreweries await you at every corner.