Skip to content
Home > Affordable Places to Live > Can’t Afford to Live in Portland, OR? Live Here Instead.

Can’t Afford to Live in Portland, OR? Live Here Instead.

In Portland, the cost of living can be steep. Get more bang for your buck in these nearby cities. 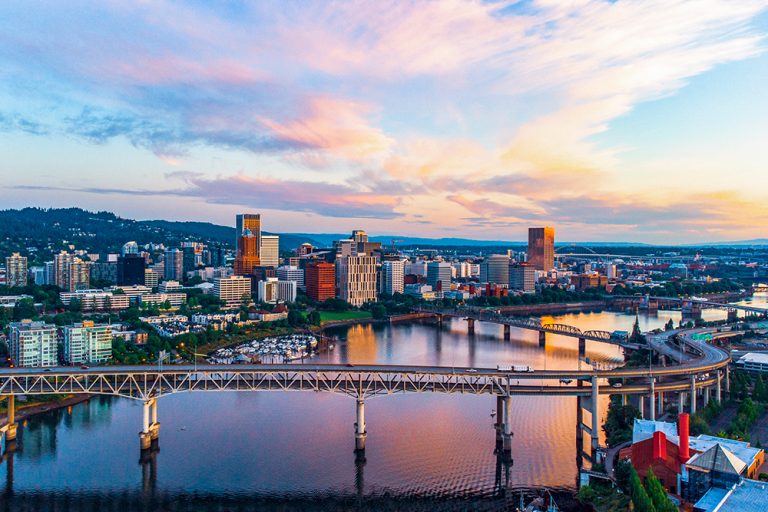 Millennials are flocking to this quirky city, and in 2019 Portland was the number one city for millennial migration, according to one study.

Of course, all of this comes with a sky-high price tag.

According to Redfin, Portland’s overall cost of living is about 34% higher than the rest of the nation, and the median selling price of homes in Portland is currently at $549,000 and rising. That’s about 84% higher than the national average. So how does the city’s average salary hold up to this? Not great. The average salary is $67,000, and a Portlander looking to purchase a house in the metro area needs to earn at least $86,833.

With all of that being said, Portland is by no means a cheap city to settle down in. Have your heart set on living in Portland but don’t have the funds? You may have to cast your net a little wider — but don’t worry! These nearby cities are home to all of the same Portland weirdness without the same Portland price tag.

Nestled just 7 miles west of downtown Portland, Beaverton has it all. This city draws in more families than Portland, thanks to its excellent schools, walkability, and many parks. Beaverton home buyers also can look forward to getting more bang for their buck in terms of house size and yard compared to Portland. Since residents live in Washington county and not Multnomah county (where Portland sits), residents also enjoy lower taxes. Beaverton has a booming job market and is home to the Nike World headquarters and draws in folks looking to work in the tech industry. With an average commute of 24 minutes, Beaverton dwellers enjoy all that Portland offers. Another plus? Beaverton is known as the gateway to Tualatin Valley’s wine country, so we’ll drink to that!

Nicknamed the “Hub City,” Hillsboro is home to the Silicon Forest, a cluster of high-tech companies including Intel, Synopsys, and Oracle America. Because of this, the average household income is higher at $82,275, but home prices are still much lower than those in Portland proper.

Living in Hillsboro is 6.7% cheaper than living in Portland, so what gives? Not much, actually! Hillsboro is an excellent place to put down roots, and it landed a spot on our list of Best Places to Live in Oregon thanks to its thriving job market and a park system with more than 20 parks. In addition, Hillsboro’s vibes are very similar to Portland in that it still does have an urban feel (but with the benefits of living in the suburbs), plenty of coffee shops and excellent restaurants and access to the MAX light rail.

Planning a move to this Pacific Northwest gem? From climate to cost of living to things to do, here’s all the info you need.

Nestled on the Willamette River, the stunning natural surrounds of Milwaukie with its close proximity to Portland scored it a spot on our list. Like Portland, Milwaukie has easy access to the mountains and the coast, with endless outdoor recreational opportunities. It’s also a reasonably bikeable city so that you can ditch your car. While Milwaukie holds its own in terms of unique restaurants, bars, and coffee shops, you’re just a quick ride on the MAX light rail to Portland. According to residents, Milwaukie boasts the best farmer’s market in all of the Portland metro area — and that’s saying something!

This city is one of the more affordable cities in the Portland metro area, and it is 7.6% cheaper to live here than in Portland, with housing costs nearly 15% less.

This college town ranked as one of Livability’s Top 100 Places to Live, and it’s no secret why. Corvallis is home to Oregon State University and all of the restaurants, breweries, coffee shops, and nightlife that come with being one of the best college towns in America. The city is vibrant and intelligent, boasting a large number of residents with graduate degrees.

Surrounded by towering mountains and gorgeous forests like the Siuslaw National Forest, Corvallis is a haven for biking and hiking. But, like Portland, this growing college town is also buzzing with creativity and art and has no shortage of art galleries, murals, public art, and local theaters.

Did we mention breweries? Corvallis has nine breweries and cideries, along with a handful of distilleries that rival those in Portland. Residents get all of this at a cost of living nearly 14% lower than Portland, so what are you waiting for?

Okay, while not technically in Oregon, Vancouver, WA, is just a quick hop across the Columbia River to Portland. If you’re longing for a more affordable Portland, Vancouver might just be the place to go.

Like Portland, Vancouver offers all of the unique shops and restaurants, farmer’s markets, bookstores, and bars — just in a smaller package and more affordably. In fact, according to BestPlaces, Vancouver’s housing market is relatively affordable and is ranked 137.2 (the national average is 100) compared to Portland at 181.5. Plus, Washington is one of nine states that doesn’t have income tax!

This miniature Portland is a green city in every way. While it is surrounded by gorgeous nature in every direction, it also takes the environment seriously and is committed to creating a more sustainable city.

And if you need even more Portland vibes, you can stand on Vancouver’s new Grant Street Pier and gaze across the river at the city’s skyline — soaking it in without hurting your wallet.