Skip to content
Home > Education, Careers & Opportunity > Culture on Every Corner: Why One City Is Paying Street Performers a Living Wage

Culture on Every Corner: Why One City Is Paying Street Performers a Living Wage

A new pilot program in Austin, TX, provides buskers a living wage. Here's why they're investing in sidewalk entertainment — and which cities might be next. 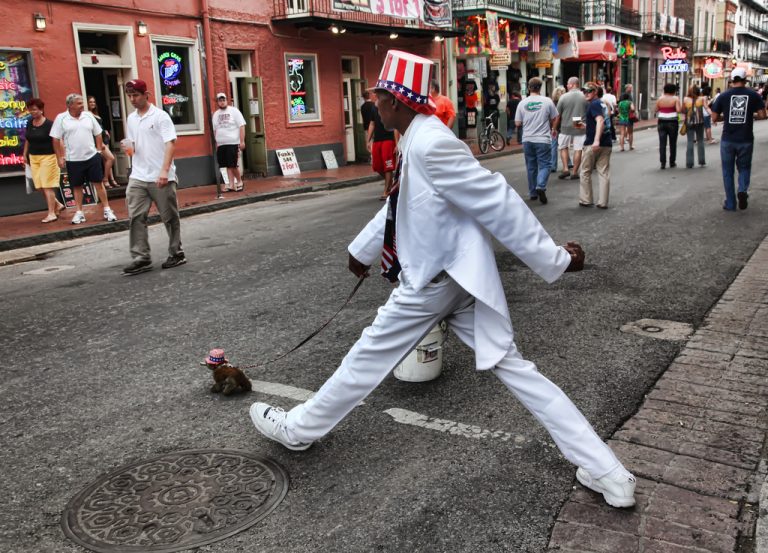 One of the best ways to get to know a city and its culture is to check out the local music and entertainment scene. We’re not talking about buying a ticket for the theater or a concert; we’re talking about the performers and entertainers who take their craft to the streets, performing for passersby (also known as busking).

You’ve seen them before, and probably paused during a busy day to enjoy a particularly engaging performance: a banjo picker in Nashville on the corner of Broadway and Second Avenue, a Cajun-Zydeco band blaring brass and local art hung on iron fences in New Orleans, and even Americana music and balloon artists on the streets of Portland.

These street performers add to a community’s artistic and cultural identity while providing entertainment for locals and visitors alike. Buskers rely on tips to make a living, which can certainly be lucrative on a good day, but doesn’t translate to a steady income.

More and more cities are starting to realize the cultural value of buskers, and one musical hotspot has found a novel way to make it easier for these artists to make a decent wage and protect their profession — creating laws and compensation to support their talents.

Austin, TX, the “Live Music Capital of the World,” is taking the bull by the horns by creating a new pilot program to give buskers access to prime spaces and pay them a living wage for their work. While busking is a popular pastime in the city, many laws – sound ordinances and loitering laws – have prevent musicians and entertainers from working high-traffic areas, when they could be making some serious dough.

The City of Austin Music & Entertainment Division created a new pilot program for buskers as part of its ATX Musicians Compensation Initiative. Rolling out in 2018 during the South by Southwest Conference and Festivals, the city is taking advantage of new developments, green spaces and the downtown Seaholm District thanks to $150,000 in funding from Green Water developer Trammel Crow. The program already has more than 350 applications that will pay buskers a wage for doing what they love.

“The hope is that the program will make and contribute to making Austin more of a culturally open, busking city,” says Karen Jantsch, with the City of Austin Music & Entertainment Division. “The biggest goal is getting money into the hands of local musicians.”

While Austin may be at the forefront with their pilot program, the hope is that other cities follow suit. “We want to step up and make this program possible,” says Jantsch. “So we have the data for future programs and partner cities.”

With that in mind, here are some of our other favorite spots around the country that have taken action to encourage street musicians and performers to continue their craft — and where a living wage program like Austin’s could be in the cards.

Whether it’s a band playing folksy Americana on Hawthorne or a clown on stilts at the Saturday Market, Portland is full of creative and eccentric buskers. The city created the Street Musicians Agreement in the mid-90s to help protect both performers and residents of the city.

The agreement represented a community, business and performer coalition ensuring that all parties can perform, operate businesses and live without interruption. While the agreement puts limits on where and when buskers may perform, it also outlines rules that businesses and residents should follow that create a safe space for buskers to work. While rules are important, the city also celebrates some of its best street musicians at events such as the Portland All-Star Buskers Concert, as well as welcoming many to real stages at local music festivals and events.

Maybe one of the most memorable moments in Music City’s busking history was when Grammy Award Winner Sturgill Simpson broke out his guitar outside of the CMA Awards in 2017 after being snubbed as a guest. But no matter where you traverse around lower Broadway in Nashville, there’s bound to be banjos pickin’, fiddles bowed and spoons slappin’ – right outside of the city’s famous honky tonks.

The community is known for its welcoming nature to magicians, musicians and street performers of all sorts, while performers have a tight-knit community of their own. It’s true, the competition is fierce in Music City, but laws make it easy to set up shop, underscoring the belief that street performers promote the cultural and artistic heritage of the city – so buskers are exempt from panhandling laws as long as they don’t ask for money and only accept donations.

There’s one place in Boulder where you’ll find the best buskers – and where they are permitted to do it legally – the Pearl Street Mall. The entertainers there all seem to have very niche talents, such as the Zip Code Man who can guess — that’s right — your zip code, the contortionist, fire breathers, magicians, unicyclists and knife throwers.

City ordinances keep most street performers sequestered to Pearl Street Mall, but the agreement works well for both parties. When residents and visitors venture out to the area, they know they will experience original dining, shopping and entertainment. The Pearl Street Mall welcomes most entertainers, but complex performances that require stilts, fire, juggling, knives, unicycles, slack lines, whips, hula hoops and tall equipment require a permit.

Courtesy of Beadmobile under a CC 2.0 license

What would New Orleans be without the human statues on street corners that can seemingly stay still for hours, or the kids with bottle tops on the soles of their shoes tapping down the French Market, and better yet, the world-class performances from musicians along most corners of Bourbon St., Jackson Square and Royal St.?

The rich artistic traditions in the Big Easy make it easy for performers to take advantage of the tourist-packed French Quarter. Like most cities, panhandling is illegal, but performers are permitted to entertain in most places, while others like the French Market require a permit. Luckily for buskers, the University City Center and the Music and Culture Coalition of New Orleans created the “Guide to New Orleans Street Performance in the French Quarter and Marigny,” and the 1996 Street Performer Code of Etiquette still stands today to help newbies and veterans navigate the world of busking in New Orleans.