Music City is chock-full of famous people, and here are some places you're likely to bump into them. 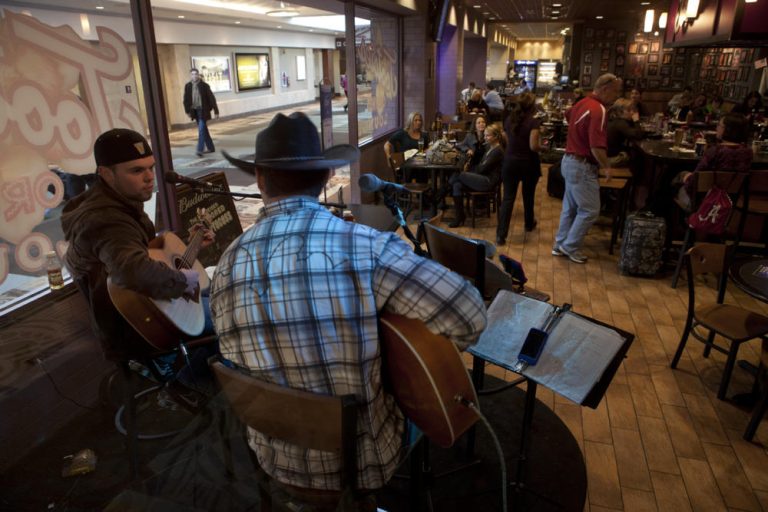 Unless you live in cities like New York or Los Angeles, you probably haven’t had the chance to see many celebrities in person. So if you’re looking to add some excitement to one of your vacations, you may want to try visiting Nashville. Not only does Nashville have a great nightlife, but it offers what very few others cities can: A great chance of seeing celebrities as they go about enjoying Nashville’s laid-back attitude.

It’s genuinely difficult to get bored in Nashville. Here are our top picks for things to do in Music City.

This is primarily because Nashville has had a longstanding reputation as a paparazzi-free city, excluding the somewhat recent addition of a TMZ office downtown (BOOOO). But more than that, the attitude of the locals tends to be more along the lines of letting celebrities live their lives in peace. Which also comes with a fair warning: Like most people, they don’t like it much when hordes of humans disturb them–so please don’t be a bother!

1. The Mall at Green Hills

The Green Hills area tends draw the rich and famous, and the mall there is definitely no exception. My brother worked at The Mall at Green Hills for two years, and in that time he saw a ton of famous people, including Alan Jackson, Scott Hamilton, R. Kelly, Taylor Swift, Mac Macanally, Kix Brooks and Ronnie Dunn, Lily Aldridge, Faith Hill, Tim McGraw and more.

Nothing in Nashville is quite like Santa’s. It’s run out of a Christmas-y doublewide (with a patron who looks like the man in red himself), so it’s the ultimate dive bar. Beer is $2 and up, karaoke starts at 7PM, and locals love it–celebs included. Personal sightings include Kacey Musgraves and Big Kenny from Big & Rich–plus Gavin DeGraw and Ed Sheeran, who both decided to join in on the karaoke one time. The best time to show up is usually later in the evening on a weekend.

Both Green Hills and Whole Foods are frequently associated with people who can afford to splurge on asparagus water, so it’s probably not a huge shock that this Whole Foods attracts a lot of celebrities. Steven Tyler, for example, has been seen shopping inside, as has Nashville‘s Connie Britton.

Those of you in Nashville are probably pretty familiar with Bongo and its hipster vibe. Camped right across the street from Belmont University, its frankly delicious coffee tends to draw in a lot of students–and celebs as well. For instance, I once saw Nicole Kidman there reading a script in the corner as she sipped a latté; my brother ended up in line behind Taylor Swift waiting to order his; and Eddie George and others have been sighted there, too. The best time of day for this is earlier in the morning, when Bongo isn’t packed and they know they can get in and out without much of a fuss.

Pinewood Social is a pretty unique space, with its own pool, bocce court, various spaces for food and drink, and a vintage bowling lane. Celebrities apparently find it pretty cool as well, as I’ve had friends and family spot Reese Witherspoon, Mike Wolfe (from American Pickers), and others having a fun time bowling there.

Noshville (Green Hills)Noshville has always been a family favorite, but it was forever cemented in our hearts at my brother’s college graduation. After taking our entire clan there for breakfast, my uncle Charlie (a big fan of country music) held the door open for Vince Gill, who was coming in. “Thanks, pal,â€ said Vince. Uncle Charlie is now known as “Palâ€ to the entire family.

Hillsboro is a charming part of Nashville that I lived in for a while, and it gets its fair share of celebrities as well. Ryan Reynolds and Blake Lively apparently went ring shopping in the area (I, sadly, was in class at the time), and every once in a while, Pancake Pantry will draw in someone famous. Like–for those of you who follow college football–Coach Derek Mason of Vanderbilt, who I got to meet as he waited in line for (surprise) pancakes.

Friends of mine happened to go to this famous karaoke bar when Seth Green (of Buffy, Family Guy, and The Italian Job fame) decided to check it out. Seriously, Lonnie’s is a Nashville institution.

If you love History Channel, Mike Wolfe of American Pickers is also frequently seen around his store in Marathon Village. Better yet, he occasionally has events at the Antique Archaeology store, where you can meet him and his dog, Ruby, and get an autograph. (Here was one such event.)

Let’s be honest: There’s a decent chance of seeing someone famous anywhere you go in Nashville. It’s a huge hub for country musicians in particular (if you’re into that kind of thing)–although it’s quickly becoming a city for all kinds of music, and actors seem to love it, too.

Nashville isn’t just a great place to spot famous musicians, you can also dine at their fabulous restaurants.

But all of this hinges on one thing: Leaving these celebrities in relative peace. They come to Nashville for a reason, after all–to be able to live their lives as normally as possible, for once–so it would probably be best to enjoy the encounter itself without whipping out your cell phone. That way, the rich and the famous will continue to want to come to Nashville, and will continue to provide us normal folk with fun stories for years to come.