We all know about that corner in Winslow, Arizona. But we bet you didn’t know you could visit the real-life places behind these famous songs. 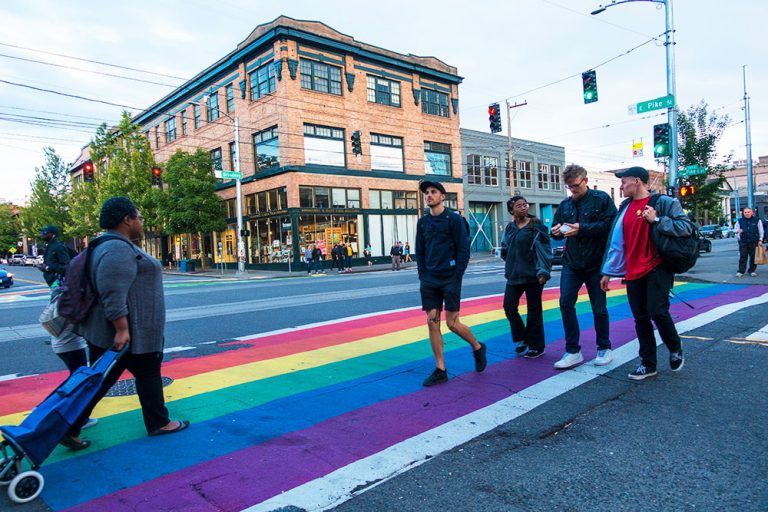 Since the creation of music itself, songwriters have been inspired by their surroundings – there are songs about carefree life in small towns to finding hope in big, bright cities and everything in between. Chances are you already know all the really famous songs about some of America’s most recognizable places – “New York, New York” by Liza Minelli (and re-recorded by Frank Sinatra), “Detroit Rock City” by Kiss, “Straight Outta Compton” by N.W.A., “Viva Las Vegas” by Elvis, “Empire State of Mind” by Jay-Z and Alicia Keys … the list goes on and on (and also includes just about everything Bruce Springsteen has ever written), but here are 10 more great tunes about real places in America that aren’t quite as obvious — and that you can visit to this day.

Even better? We’ve compiled all these songs into a Spotify playlist so you can listen while you read: click here to listen!

Allison Road, Roosevelt, TX
Gin Blossoms’ 1992 pop hit “Allison Road” may sound like an upbeat love song about a woman and the proverbial road that singer/songwriter Robin Wilson had to travel in order to be with her, but Allison Road — and the exit sign Wilson mentions in the line, “I didn’t know I was lost at the time/Eyes in the sun where the road wasn’t wide/So I went looking for an exit sign” — are both real.

The Best Cities for Up-And-Coming Artists

Whatever your creative dreams look like, here’s the perfect place to make them come true.

The Allison Road exit is on Interstate 10 in Roosevelt, TX, and Wilson and a friend supposedly spotted the sign one day while they were on their way to El Paso. What awaits you if you fall prey to Allison Road’s siren call? Not much, actually — Allison Road is a dusty, dead-end street that hosts little more than a general store and Allison Water Well Drilling & Services.

Burnside Ave., Portland, OR
Several years before Portland, OR, became the butt of the joke via Carrie Brownstein and Fred Armison’s sketch comedy show Portlandia, Brownstein and her Sleater-Kinney bandmates thought the quirky Pacific Northwest city was quite cool. In the punk-tinged rock song “Light Rail Coyote,” from their 2002 album One Beat, the band sings, “On the long weekends/Where I cross the bridge/To the water fountains/And drink in the hope/That the city brings.” They also make mention of Burnside Avenue, the busy thoroughfare that stretches through Downtown Portland and still houses diners, strip clubs, bookstores and punk rock clubs to this day.

2120 S. Michigan Ave., Chicago, IL
The Rolling Stones’ blues-kissed instrumental “2120 South Michigan Avenue” wasn’t written because a young Mick Jagger and Keith Richards liked to go shopping along Chicago’s famous Magnificent Mile (although those sweet deals at Zara are hard for anyone to pass up).

6 Iconic Christmas Movie Houses You Can Visit in Real Life

From the “Home Alone” mansion to Susan’s dream home in “Miracle on 34th Street,” here’s where you’ll find the famous houses from your favorite Christmas movies.

Back in 1964, when the harmonica-heavy jam was released, 2120 S. Michigan Ave. was home to Chess Records, a record label that recorded and released material from blues, jazz and rock legends including Howlin’ Wolf, Etta James, John Lee Hooker and Chuck Berry. The Stones recorded this song there, too, no doubt basking in the glow of all the giants who came before them and shaped the band’s now renowned sound. Sadly, Chess Records is long gone — founding brothers Leonard and Phil Chess sold it in 1969 — but you can still go and take in all the musical history as the address is now home to Willie Dixon’s Blues Heaven Foundation.

E. 65th St. and S. Ingleside Ave., Chicago, IL
Six miles south of 2120 S. Michigan Ave. sits E. 65th St. and S. Ingleside Ave., the Chicago intersection Chance the Rapper sings about in his bittersweet 2018 single “65th and Ingleside.â€ Life was rough when Chance and his girlfriend Kristen Corley first moved into an apartment near the intersection — he told Genius.com, “I was openly cheating on my girl … We also lived in the hood. It was terrible shit going on around us.” On the track, Chance recalls being broke, struggling to find footing as a rapper and needing to grow up in order to save his relationship with the woman he loved.

He obviously figured it out — now he’s a very successful rapper and he and Corley have a child together and are engaged to be married. “A lot of the song is about us making a home after living in so many different houses together and separately,” he says. Gotta love a happy ending.

Ninth St. and Hennepin Ave., Minneapolis, MN
The streets of Minneapolis are rich with musical history — it’s where everyone from Prince and The Replacements to America’s current sweetheart Lizzo got their start. But one spot that doesn’t often make the “must-see” list for music fans is the corner of Ninth St. and Hennepin Ave., the intersection that at least partially inspired Tom Waits’ gritty, eerie spoken-word track on 1985’s Rain Dogs.

A Guide to Prince’s Favorite Places in Minneapolis

No, there’s no shop selling donuts with “names that sound like prostitutes” today, but while you’re there you can stop in at the Orpheum Theater to catch live music and comedy or a broadway show.

And bonus Waits material: The pizza joint at the center of the 1974 song “Ghosts of Saturday Night (After Hours at Napoleone’s Pizza House)” still exists, too — find it at 619 National City Blvd. in National City, CA.

Christie Rd., Martinez, CA
Green Day hit it big in 1994 when they released Dookie, the hook-filled pop punk gem that’s often credited for taking punk mainstream in the mid-’90s. On Dookie, singer Billie Joe Armstrong mostly sings tongue-in-cheek songs with plenty of raunchy lyrics (see: “Basket Case”), but part of Green Day’s charm is their ability to be unabashedly sincere. “Christie Road,” a track on Kerplunk (their 1992 record that went platinum in the U.S. after Dookie’s success) is the perfect example.

Small-Town Playlist: The Best Songs about Small-Town Living in the U.S.

Take a listen to some of music’s best songs about small-town life.

Feeling restless and alone, Billie Joe Amstrong sings, “Give me something to do to kill some time/Take me to that place that I call home/Take away the strains of being lonely/Take me to the tracks at Christie Road.” Christie Road is in Martinez, CA, and it’s supposedly where Armstrong would meet up with friends to chill, smoke some weed and forget about life’s troubles. Now that marijuana is legal in California, you, too, can head out to Christie Road and re-create that very scene. You probably won’t grow up to write a Tony Award-winning Broadway musical like Armstrong did, but who knows! Weirder things have happened.

Various streets in Seattle, WA
Sir Mix-A-Lot isn’t singing about some generic Broadway street in his 1988 hit “Posse on Broadway” — this song is very much about Seattle, WA. Throughout the tune the rapper recalls a crazy limo ride, which starts on Rainier Ave. S. in South Seattle. Mix-A-Lot and his crew make a stop at 23rd Ave. S and S. Jackson St. in the Central District, they roll along Martin Luther King Jr. Way, “break a left” at 23rd Ave. and E. Union St. and finally head on up to Broadway where they grab a bag of burgers at Dick’s Drive-In, a beloved local burger chain that’s been around since 1954. (Mix suggests Dick’s is for the “rich” and the “cool,” but the costliest item on the menu is the famous Dick’s Deluxe for just $3.40.)

For more Seattle-inspired hip-hop, check out “The Ave” by Blue Scholars, a song about University Avenue in the University District, and “The Town,” by Macklemore, which lists off several gone-but-not-forgotten Seattle landmarks.

8. “My City Was Gone,” The Pretenders

Various locations in and around Akron, OH
Unlike every other song on this list, you can’t actually go visit all the spots singer Chrissie Hynde recalls in The Pretenders’ 1982 track “My City Was Gone.” And that’s the sad point. In the tune, Hynde returns to her hometown of Akron, OH, and discovers that her childhood memories have been snuffed out by sprawling development — “All my favorite places/My city had been pulled down/Reduced to parking spaces/Eh, oh, where did you go, Ohio?” she sings over a rubbery bassline.

Trust us — reading this list will make you feel like a kid in, well, a candy store.

Of course that song is nearly 40 years old now, and Akron has a lot more to offer critics these days. LeBron James was born in Akron in 1982 and played basketball for St. Vincent-St. Mary High School before signing with the Cleveland Cavaliers, and it’s also home to renowned restaurants including DBA, which is owned by Dante Boccuzzi, a James Beard Award nominated and Michelin Star winning and chef. If Chrissy visited again, she might still miss the city of her youth, but we bet she’d be impressed by the city that Akron’s becoming.

9. “Every Ghetto, Every City,” Lauryn Hill

Various locations in and around South Orange, NJ
The song “Every Ghetto, Every City” on Lauryn Hill’s critically acclaimed debut The Miseducation of Lauryn Hill is a sweet, upbeat love letter to South Orange, NJ. “But way before the record deals/Streets that nurtured Lauryn Hill/Made sure that I’d never go too far,” she sings, before revisiting memories of playing in Carter Park, swimming at the pool on South Orange Ave., buying popsicles on Springfield Ave. and watching fireworks at Martin Stadium.

Much of what Hill remembers appears to be gone or renamed today, but that doesn’t stop her from appreciating the place she calls home — in the song’s chorus she croons, “Every ghetto, every city/And suburban place I been/Make me recall my days in New Jerusalem.”

W. Ann St. and N. Main St., Ann Arbor, MI
Of all the Main Streets in the world, the Main Street that Bob Seger sings about in his 1977 hit is Ann Arbor’s Main Street, specifically where N. Main St. meets W. Anne St. In a 1994 issue of Detroit Free Press, Seger wrote about how that area of Ann Arbor – pulsing with energy from a pool hall, live music and women dancing in windows — was “an entire awakening of my life; before that I was kind of a quiet, lonesome kid.” The area is probably a little less lively these days — now that intersection is home to Washtenaw County Clerk and a few other government offices.

There’s no denying it — working remotely has its perks. But what are we giving up if we don’t return to the office? What value might we miss out on? … END_OF_DOCUMENT_TOKEN_TO_BE_REPLACED