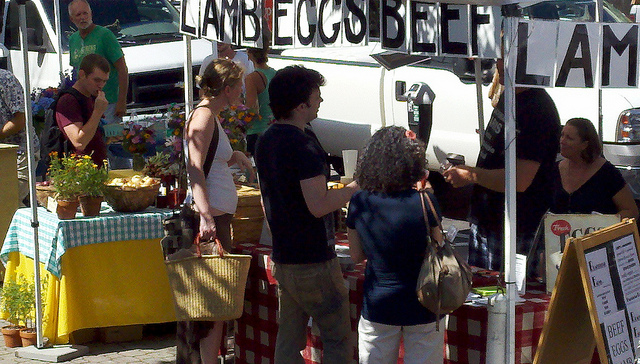 Nothing says “summer” quite like strolling through a well-stocked farmers market and scooping up fresh, locally grown fruits and vegetables that you just know will taste delicious in a salad, cobbler or pie. And if that’s not enough, there’s also typically baked goods, meats, eggs and other tasty treats from local vendors – all of which can be used to create the perfect summer meal – plus arts and crafts, live entertainment and more.

Most communities have farmers markets, but we’ve rounded up the best of the best in the South to create a farmers market trail that’s more than worth traversing. Bonus: Each city on our list happens to be a great place to live and visit with plenty of fun things to do. Ready to get started?

First up is the Baltimore Farmers’ Market & Bazaar that takes place on Sunday mornings from the end of April through mid-December beneath the Jones Falls Expressway at Holliday and Saratoga streets in Baltimore, Md. It’s the largest producers-only market and Maryland, and in addition to locally grown and produced foods, it features unique crafts and collectibles as well as live music and cooking demonstrations.

This Kentucky Doughnut Trail will Leave Your Tastebuds Satisfied

Photo: Courtesy of keithreed01 under a CC 2.0 license.

Thanks to the Lexington Farmers’ Market’s year-round and seasonal offerings, you’re in luck no matter when you visit the community (see locations and hours here). Unsurprisingly, the market’s busiest days are Saturdays and Sundays, so come early to stock up on the fresh foods provided by more than 70 local farmers and vendors. Busy weekend? Check out the market’s farm stand on the corner of Maxwell and Broadway from 7 a.m. until 4 p.m. on Tuesdays and Thursdays.

Photo: Courtesy of Troy DeRego under a CC 2.0 license.

Also open year-round, the Nashville Farmers’ Market is a big one, covering 16 acres from Harrison to Jackson streets on Rosa L. Parks Blvd. The market is stocked with locally grown and sourced foods from more than 150 farmers and merchants during peak growing season, and there are 14 locally owned restaurants on-site serving up cuisines from around the world. Additionally, the market is home to Grow Local Kitchen that hosts cooking classes throughout the year.

You Never Knew Craft Beer Effects the Economy so Much

Photo: The Market at Pepper Place

Your fifth stop along our farmers market trail is The Market at Pepper Place in Birmingham, Ala., where you’ll find a diverse range of foods supplied by Alabama growers and producers based no more than 200 miles away from the market. Open year-round on Saturday mornings, the market also includes cooking demonstrations from May through early October, live music and kids’ activities.

Photo: Courtesy of daystreamin’ under a CC 2.0 license.

Our trail ends at the Athens Farmers Market, which operates out of two locations: Bishop Park on Saturday mornings from April to mid-December and Creature Comforts on Wednesdays from 4-7 p.m. April through mid-November. Along with vendors selling fresh produce, meats, eggs, cheeses and prepared foods, the market features arts and crafts, a kids’ activity table, live entertainment and cooking demonstrations.