From Denver to Vermont, historic train stations are being reinvented as entertainment hubs, hotels and co-working spaces. Get on board. 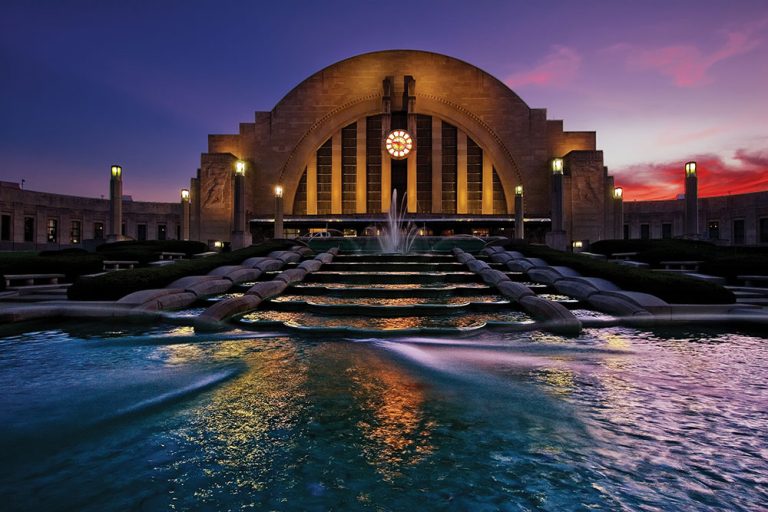 Some of America’s best comeback stories are playing out in a most unlikely place: train stations. When rail travel began to dwindle in the 1950s and 60s, these train stations – which range from charming depots to opulent architectural marvels – were on the brink of being left behind. But thanks to creative restoration efforts, some of America’s best train stations continue to roll on, serving as transportation hubs as well as hip, modern entertainment centers that echo a bygone era.

Here are eight of our favorite train stations in the United States that have undergone some seriously cool transformations. They all have historic significance, and many now serve as their city’s living rooms, bringing together residents and travelers.

Aside from its culinary prowess, Union Station is a hub for Light Rail trains that stretch to surrounding suburbs, and also houses an Amtrak station. On winter weekends, the Winter Park Express Ski Train departs from the train station, bypassing ski traffic and dropping snow enthusiasts off at the base of the mountain. Plus, residents and visitors can get aboard all types of seasonal fun in the train station: You can carve pumpkins at a bar leading up to Halloween, marvel at a massive Christmas tree during the holiday season and watch chef demonstrations at the farmers’ market during warmer months.

And every day of the month, you’ll find travelers mingling with locals at the tables in the center of the station, which serves as not just as a spot to wait for a train, but a cozy meeting area and co-working space.

Originally, this charming train station was built in 1875 and served the Central Vermont Railroad. A fundraising campaign coupled with revitalization efforts helped restore the Victorian depot, which is a centerpiece of the village square in Waterbury. Amtrak delivers passengers from New York City and Connecticut to the revived train station so that they can see fall foliage, ski, go hiking or sample craft beers, says Katya d’Angelo, a Revitalizing Waterbury board member. The village of Waterbury is an ideal basecamp for skiers because it’s located at the center of four ski areas – Stowe, Sugarbush, Mad River Glen and Bolton Valley.

Waterbury is a delicious destination even if you’re not interested in hitting the slopes – the train station is also near Ben and Jerry’s ice cream factory.

A crown jewel of St. Louis Union Station is the Grand Hall, a lobby featuring a 65-foot, barrel vaulted ceiling with stained glass windows. The walled city of Carcassonne in southern France was the muse for architect Theodore C. Link who designed the opulent Grand Hall. Originally debuting in 1894, St. Louis Union Station still serves as a functioning train station, plus a hotel.

Travelers here can catch daily 3-D light shows that display bursting fireworks, swaying flowers and other images dancing around on the ceiling. The best way to view the show is while sipping craft cocktails or local brews in the Union Station Hotel’s lounge. A must-see is the Allegorical Window, a stained glass window that features three women representing the main U.S. train stations during the 1890s – New York, St. Louis and San Francisco.

Architecture buffs will especially love The Station House in Red Bank. It’s one of the last remaining examples of Stick-Style station houses that were built by the New York and Long Branch Railroad in the 1870s.  (Think: decorative stick work on the exterior of a building). The Station House has undergone several renovations and remains a fully functioning hub for New Jersey transit as well as a beautiful historical landmark.

Once upon a time, between 1909 and 1970, the Chattanooga terminal was the largest in the United States. It was converted into the Chattanooga Choo Choo Hotel in 1974, and train enthusiasts spending the night here can slumber inside renovated Pullman cars.

This is the Best City In Tennessee for Quirky Attractions

Surrounding the hotel is Chattanooga’s Station Street, a lively entertainment hub with restaurants, comedy shows and live music. Plus, Station Street allows for open containers, so you can grab a cocktail to-go and enjoy outdoor festivals or live entertainment. If you’ve never been to Chattanooga, we can’t recommend it highly enough – and the Choo Choo is a perfect base to experience all the city has to offer.

Raleigh’s Union Station is buzzing for a couple of reasons: It’s in the trendy, up-and-coming warehouse district, and, well, it features a “pollinator gardenâ€ with plants that help attract bees. (Raleigh, by the way, is a “bee-listâ€ city). Unlike others are on list, this train station isn’t a remodeled one. Rather, the Amtrak station that made its debut in May 2018 moved into the shell of Dillon Supply Warehouse. Developers were able to preserve 80 percent of the steel from the former warehouse when they built the station. The station is also home to offices, shops and restaurants and recently hosted a pop-up, outdoor co-working space.

7. The Crowne Plaza Hotel at Union Station in Indianapolis, Indiana

Cool hotel alert: In Indianapolis, guests can stay inside a renovated 1920’s style Pullman train car situated on its original tracks. The Crowne Plaza is located in the heart of Indianapolis on the site of America’s first ever Union Station.

The building is listed on the National Register of Historic Places. Here’s a little train history trivia: Thomas Edison was once a telegraph operator at the union station, but was fired so he skipped town, says Nate Swick, communications coordinator for Visit Indy.

Several presidents have made visits to Cincinnati’s iconic Union Terminal, including Franklin D. Roosevelt, Harry Truman, George W. Bush and Barack Obama. The Art Deco train station that originally opened in 1933  is home to the Cincinnati Museum Center and today has limited Amtrak services running between Cincy and Chicago. Union Terminal is undergoing a $234 million renovation, scheduled to be completed in November 2018. Soon thereafter, the Holocaust and Humanity Center, one of the largest Holocaust educational museums in the world, will relocate to Union Terminal.