Skip to content
Home > Healthy Places > Ready for a Refill? How Two Cities are Promoting Sustainability Through Refilleries

Ready for a Refill? How Two Cities are Promoting Sustainability Through Refilleries 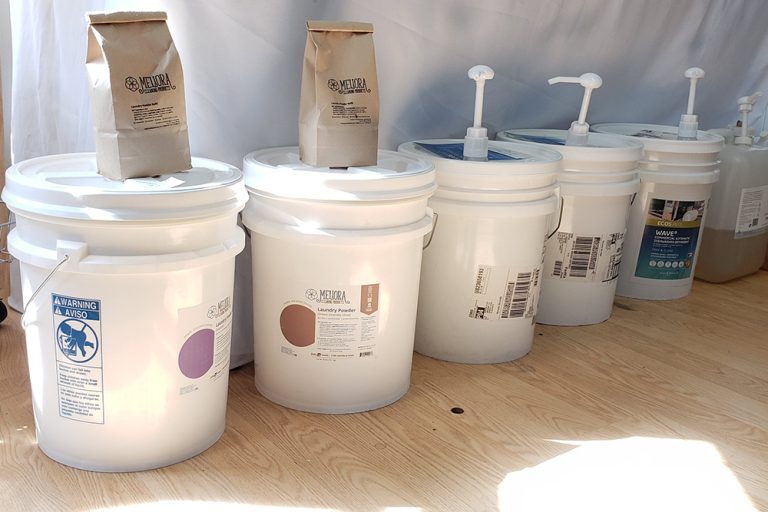 Photo Courtesy of The Burncoat Center for Arts and Wellness

It’s a saying we’ve heard time and time again — reduce, reuse, recycle. For a lot of us, we’re primarily focusing on the last part of the trio, right? Tossing our empty soda cans, wine bottles and plastic food containers into our blue-lined garbage can and setting it out for pickup each week. Don’t get us wrong, recycling is important, but real environmental change actually lies in the first two, according to the owners of two new refilleries.

“Recycling uses a lot of energy, and not everything is recyclable and not every company is honest about what they are doing with recyclables,” says Barb Alteri, co-owner of The Burncoat Center for Arts and Wellness, a hub for health and creativity in Worcester, Massachusetts, that also houses a refillery. “So it’s really best if you want to make a big impact — I think it’s best for the environment — to reuse and refill and reduce. Recycling should be the last option.”

What also makes reducing and reusing important? Between the early 1950s (when synthetic materials first started to be mass-produced) and 2015, humans developed over 8.3 billion metric tons of plastics. Yet, according to a study led by a team from the University of Georgia, of the 8.3 billion tons that had become waste at that point, only 9% was recycled.

Now, before we jump into how the two refilleries got their start and the impact they are having on their communities, let’s iron out what this word entails.

Imagine a store filled with large containers of shampoo, conditioner, shower gel, cleaning products, laundry detergent — the list could go on and on. In your hands is an empty, clean bottle from home. You weigh the bottle, fill it with whatever product you need, weigh it once more, subtract the weight of the bottle, and then pay by the ounce. Add to your picture (because many offer these gems, too) a plethora of other zero waste and reusable items, such as bars of shampoo and soap, paper-less towels and washable cotton rounds, and you’re up to speed.

Ready to dive into their stories?

The Burncoat Center for Arts and Wellness

Launched by Alteri, a psychotherapist, and Kim Mowers, a sewist/designer, in January 2020, The Burncoat Center for Arts and Wellness began as a business that only offered arts and wellness classes — a refillery wasn’t even in the plans. However, once the pandemic hit, the women had to pivot to pay the bills and began making facemasks. As things started to calm down, Alteri and Mowers decided to host a holiday vendor market in December 2020, filling one of their classrooms with items made in the New England area. Finding it successful, they opened a handmade market and refillery in their building in January 2021.

“So that kind of just happened organically because a thread that ran through our entire business concept all along was sustainability and upcycling and recycling, so a lot of the classes we were holding were based off of donated items or items we were upcycling or reusing, and it was just something we had been naturally doing all along,” Mowers says.

While they started small, offering shampoo, conditioner, lotion and shower gel, the women had a “lofty goal” to make all the items themselves. Lack of time became an issue, as they were also trying to run classes at The Burncoat Center, so the women turned to ordering most of their products in bulk from a handful of companies (although you can still find their handmade bug spray, face toner, makeup remover and paper-less towels on the shelves!)

What else has proven difficult?

“It’s hard to find places that go as big as we want because a lot of places will sell you one gallon of something, and when you’re a refillery and your goal is to replace plastic, that one-gallon plastic jug is going to be used up pretty quickly,” Mowers says.

Despite the challenges, the women have pressed on, and their list of products has grown substantially. Today, you can find their store filled with various items for your face and body (even a refillable bamboo toothbrush) and cleaning products.

People in and around their community can’t get enough of the shop. Some individuals are even driving an hour to fill up on their products.

“We’re putting 100% of what we make back into the company right now to build it, and it’s exhausting and emotionally draining on top of having other jobs and a personal life, but it’s really the community that comes in and literally will just thank us for existing,” Alteri says.

To ensure they are offering customers products they’ll love, Alteri and Mowers share surveys via social media and email. But the main thing to understand about their customers?

“We don’t have the same people coming in every couple of weeks to refill. The people who are really into the program — it’s spaced out — they have this system, and it’s really cool to see like I know who’s coming in in a month or so because they’ve now transitioned over, and it’s their new lifestyle,” Alteri says.

After coming across the statistic that only 9% of plastic waste was recycled between the early 1950s and 2015, Nashville, Tennessee, resident Diana Duren and her husband and two daughters did a deep dive into their plastic consumption and decided to find alternatives for certain items. They found a refillery, but it was located on the other side of town and thought their community would be a perfect location for such a shop since it’s within about a two-mile radius of Lipscomb, Belmont and Vanderbilt universities.

“And so once we kind of put this idea out there … all of a sudden, these things started aligning for us, and we were like, ‘should we try to open this ourselves and just kind of see what happens?'” Duren says. “Once we started talking about it, I would say within three months, this spot opened up that’s less than half a mile from our home, and everything just fell into place.”

The family signed a lease in February 2020 and planned to open up shop in June. However, when the world shut down due to the pandemic, they launched a website and offered curbside pickup at their store in May. They were able to open at a limited capacity in mid-June.

Since then, Sage Refill Market has become a local favorite, selling kitchen, laundry, and body, skin and hair care products, among others (check out the Clary Bath + Body Oil!) And their collection is constantly evolving, as they base their offerings on customers’ needs and conduct informal polls on social media.

Another cool part about Sage? Sticking with the “reuse concept,” one of Duren’s daughters opened New Normal Vintage, a secondhand, vintage popup that offers a collection of carefully curated clothes and accessories.

Duren says their community — and even people about an hour away — loves the store and popup.

“I can’t tell you how many times a week we have somebody thanking us for being here, for being close to them, and for helping them to reduce their plastic waste,” she says.

As for the future, Duren says she and her family hope to become that “successful mom-and-pop grocery store” that serves the community’s needs.

“We hope it will eventually put enough pressure on corporations and other brands so that they start rethinking their packaging, and maybe at some point down the road in the future, stores like us aren’t even necessary,” she says.