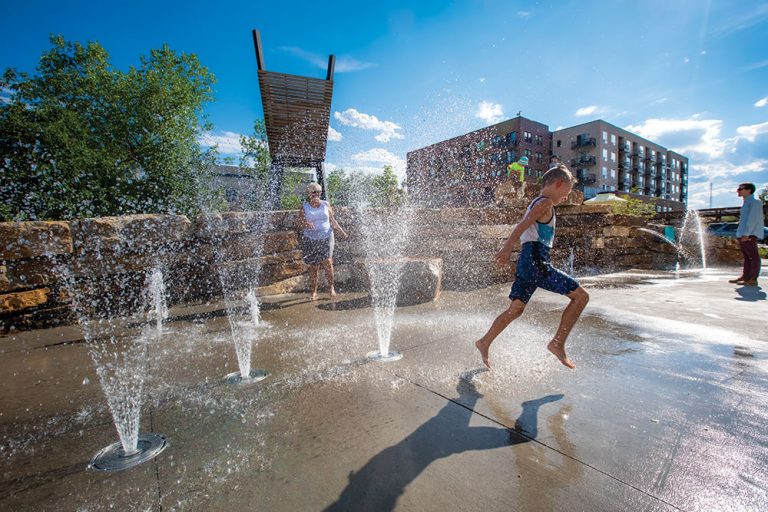 A family that plays together stays together, and with more than 300 days of sunshine, it’s hard to find a reason not to play in Colorado. Wide-open spaces — Colorado boasts four national parks, 42 state parks, 11 national forests, two national grasslands and eight national wildlife refuges — breathtaking mountain vistas and crystal clear lakes and streams are just a few of the Centennial State’s crown jewels. Add to those a booming job sector anchored in energy and technology and you have a magic mix that continues to attract outdoors-loving families from across the country.

Award-winning schools, a thriving arts and cultural scene, and abundant outdoor recreation opportunities make Fort Collins one of our 100 Best Places to Live and also our top pick for the Best Cities for Families.

Fort Collins residents value health and fitness, and the city offers busy families plenty of ways to stay active. The city’s parks system operates more than 50 parks, playgrounds, ball fields and open spaces — some dating back to the turn of the 20th century — as well as 25 miles of walking, hiking and biking trails. The surrounding lakes, mountain ridges and Poudre River also offer climbing, kayaking and fishing opportunities. Add to that lower than average health-care costs, a high walkability score, and access to healthy and fresh fruits and vegetables at any of the city’s five farmers’ markets.

Fort Collins also scores high marks for its family-friendly amenities downtown, including an impressive library system with more than 139,000 children’s books in circulation. Downtown also offers a variety of housing options, from historic single-family homes to lofts and condominiums. Families can also choose from hundreds of restaurants, shops, galleries and museums all within a mile radius. Colorado State University offers a number of programs geared toward children and their families, such as the Kids Do It All summer musical theater camp and summer and after-school youth sports camps.

Breathtaking mountain views and a multitude of outdoor recreation opportunities, including golf, helped land Castle Rock on Livability.com’s list of the Top 100 Best Places to Live. Castle Rock’s scenic beauty and quality of life are also reasons families are attracted to the central Colorado town.

Castle Rock’s 20 parks and 75 miles of trails help keep families active, and the city’s commitment to open space — a local government mandate says developers must designate 20 percent of land to open space — means residents are always within walking distance of a park. Families also take advantage of a variety of hiking and mountain biking trails along the city’s Plum Creek and Mitchell Creek trail systems. Philip S. Miller Park and Miller Activity Center is one of the area’s largest parks at 320 acres and boasts a 2.5-acre playground, a zip line, an amphitheater, climbing wall and video simulated golf course.

Located halfway between Denver and Colorado Springs, Castle Rock is the 10th-fastest growing community in America — and most of that population growth is attributed to families seeking the city’s lower home prices, low crime rate and top-ranked schools. More than half of Castle Rock’s 65,176 residents are married, and nearly a quarter of the population is school age. The median household income is $109,700, and the city boasts an unemployment rate of less than 5 percent.

A low unemployment rate — less than 5 percent — high-paying jobs and lower than average housing costs continue to lure families to Broomfield. The median household income is $96,500 and less than 6 percent of Broomfield families live in poverty. Families can find a house for less than $300,000 in Broomfield — a more difficult feat in Boulder. Broomfield also boasts a significantly lower crime rate than the national average and an 88 percent clearance rate for violent crime.

Broomfield families have access to a host of kid-friendly amenities, including top-rated schools, 18 area parks and open spaces, a variety of classes for kids — from arts and crafts to CPR and fitness — and educational activities, such as the STEM-based Little Medical School program that introduces young children to careers in medicine and science. Part of the Boulder Valley School District, Broomfield’s schools received an 8 out of 10 rating for test scores by GreatSchools.org.

Straddling Arapahoe, Douglas and Jefferson counties, Littleton offers families scenic beauty and an active lifestyle. Nestled in the foothills of the Rockies, Littleton boasts more than 1,400 acres of parks and open spaces and miles of hiking and mountain biking trails. The area also offers rock climbing as well as kayaking and fly fishing along the South Platte River. It’s not uncommon to find residents biking to work and school, and with less than 20 miles to downtown Denver, commute times are low, leaving more time to spend enjoying the area’s 300-plus days of sunshine.

Families are also lured to Littleton for its schools, which received an 8 out 10 rating from GreatSchools.org. Littleton Public Schools was awarded the designation of Accredited with Distinction by the Colorado Department of Education in 2016, the only school district in the Denver Metro Area to have earned the top rating six years in a row. The Children’s Services department of the Bemis Public Library also offers students and their families an extensive menu of educational services, programs and activities.

As a suburb of Boulder, Lafayette offers families access to the city’s amenities, such as parks and open spaces, the University of Colorado at Boulder and a host of kid-friendly museums and attractions. Lafayette families also enjoy a lower cost of living than Boulder residents. The average home cost in Lafayette is around $699,000, compared to $1,100,000 in Boulder. Lafayette also boasts a low crime rate and highly ranked schools — all reasons the city was named one of 100 Places to Live in 2016.

Lafayette’s schools, part of the Boulder Valley School District, are rated 8 out of 10 by GreatSchools.org. Schools include Centaurus High School, which offers AP courses, an International Baccalaureate program and a top-ranked engineering program; Angevine Middle School, the Bernard D. “Pat” Ryan STEAM school and Pioneer Elementary, a bilingual school where both English and Spanish are taught and spoken. The district is also home to the Peak to Peak Charter School and the private K-12 college prep Alexander Dawson School.