From embracing the cold to making time for silliness (outhouse races, anyone?), here's how to make the most of winter, Alaska-style. 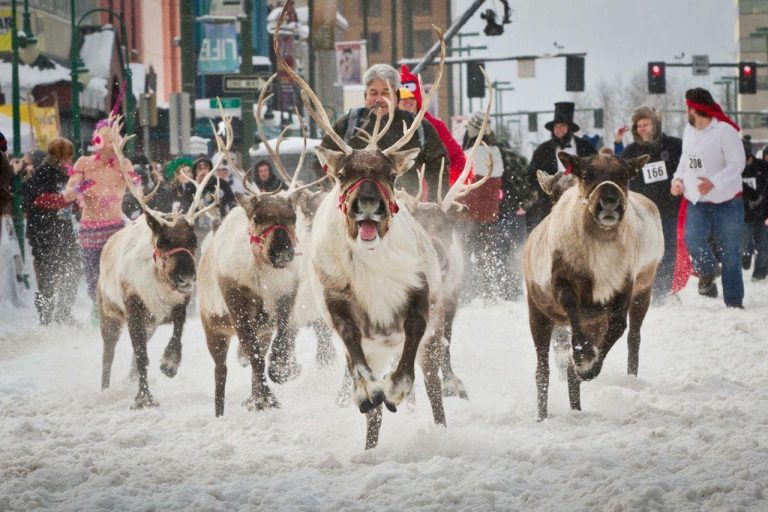 You might think of Alaska as the land of the midnight sun thanks to the long daylight of its summers. But the flipside is equally long hours of winter darkness between October and April. On the shortest day of the year, Anchorage, the state’s largest city, gets a mere five-odd hours of daylight, while Alaskans 700 miles north in Barrow watch the sunset on November 17, and don’t see it rise again until late January.

Sound depressing? Alaskans don’t let it keep us down. Instead, we celebrate winter and all of its holidays with our own unique style. Alaskans know how to make the best of the winter darkness. Here are four of our secrets that might inspire you to embrace winter fun and silliness, no matter where you live.

On December 22, the shortest day of the year, gives Alaskans in Anchorage just 5 hours and 27 minutes of daylight. While most places would take this as a cue to hibernate, cities around Alaska celebrate the changing light by partaking in all kinds of outdoor fun. Public parks around the state have activities, state-owned campgrounds can be used free of charge and a local Anchorage mountaineering club hosts a winter campout on nearby Flattop mountain. Wherever you live, get inspired by Alaskans and get outside – no matter how dark and cold it might be.

2. Make every holiday the fourth of July.

Fireworks might say “July 4â€ for most of the U.S., but in Alaska the midnight July sun means you won’t be able to see them that time of year. Solution? Shoot them off for Thanksgiving or Christmas instead. Ho, ho, ho – BOOM.

3. Make time for an outdoor carnival (or a reindeer race).

The famous annual running of the Iditarod sled dog race in early March isn’t just a big deal for mushing enthusiasts worldwide, it’s also a chance for Alaskans to get outside for another frigid winter festival. Downtown Anchorage in late February hosts the annual 10-day Iditarod kick-off festival known as Fun Rendezvous, or “Fur Rondyâ€ for short. A parade, the “Running of the Reindeerâ€ foot race for humans and – you guessed it – reindeer, and an outdoor carnival complete with Ferris wheel, are just a sampling of the events before the dogs and their handlers head to the ceremonial start line. Proof that the low time between Christmas and spring is actually ripe for fun and silliness!

Although most Alaskans live in traditional homes in cities and towns throughout the state, “dryâ€ cabins without running water or indoor plumbing are a part of Alaska’s rich history – and still common in rural areas.

Maybe that explains why the zany Alaska tradition of outhouse racing is still a normal thing. Or maybe Alaskans just like to be different (because they definitely do). No matter the reason, winter in Alaska can mean jumping in on an outhouse race. Construct and decorate a small hut, stick it on skis, head to the starting line and hope you can maneuver it faster than the other competitors.

May the fastest outhouse win! And may you get inspired to make your own fun on even the coldest, darkest days.