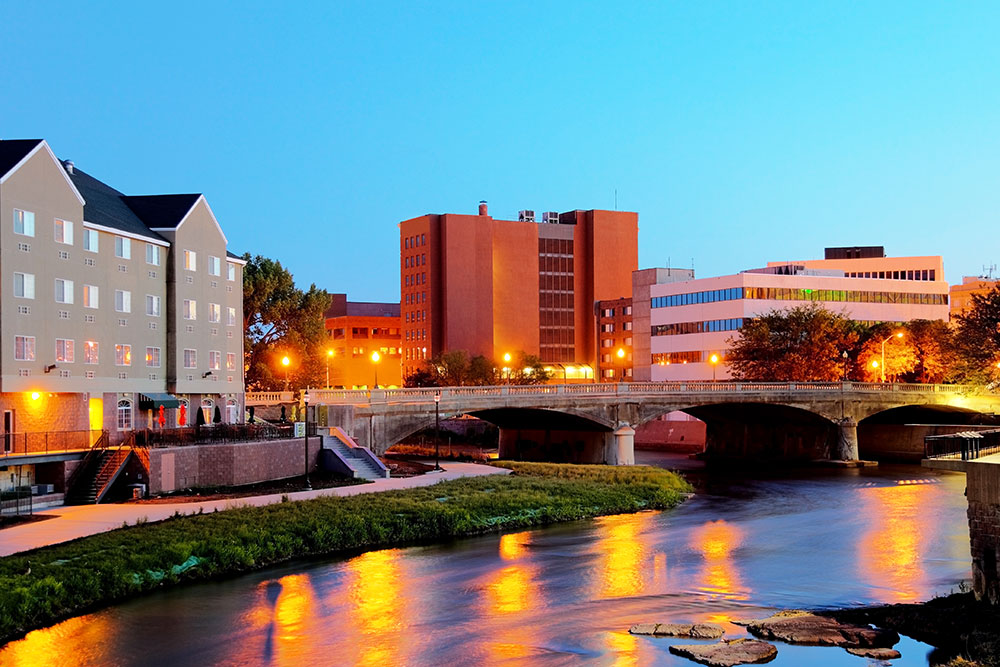 Think South Dakota is boring? Think again. Sioux Falls is full of vitality and zeal. People here are genuinely friendly and there’s a lot to see and do — it’s managed to retain a small-town feel while offering residents all the big city amenities they could ever want. The city’s affordability, low crime rate, top-notch healthcare systems, great schools (including the Sanford School of Medicine of The University of South Dakota) and four-seasons climate make it the perfect place to build a life. Want to start a business? Sioux Falls has a large, well-educated talent pool, tons of workforce development programs and excellent transportation options.

Top Industries and Employers: Biomedical, finance and banking, advanced manufacturing and food processing are some of the biggest industries here, with employers like Sanford Health and Smithfield Foods employing many Sioux Falls residents.

Best Coffee Shop: The Source Coffee Roastery + Taproom, a light and airy spot where you can grab a cup of coffee or a pint of craft beer.

Best Local Beer/Brewery: Open since 1883, Look’s Marketplace once served as a popular Sioux Falls meat counter. Today, it has retained that historic charm while also expanding and modernizing its offerings. Case in point: there’s a microbrewery here, alongside a bakery, a creamery, a full-service restaurant and more.

Must-Have Meal: A burger at the Downtown Burger Battle, an annual event in which Sioux Fall restaurants come up with some wacky but utterly delicious burger recipes.

Best Co-Working Space: 927 Studios has everything freelancers, start-ups and entrepreneurs need, including access to a conference room, break room, free coffee, and even a photo and video studio – all within two blocks of downtown Sioux Falls.

Best Meetup Spot (When Meeting Up Is a Thing Again): Great Shots, where you can hit golf balls at the driving range and play other games while chowing down on some delicious food and drinks.

Creative Hub: The Museum of Visual Materials hosts an array of exhibits, classes, workshops and events. There are DIY craft nights, artist receptions and tons of other ways to get your creative juices flowing.

Favorite Weekend Activity: Head out to the Big Sioux River Recreational Trail and Greenway to explore more than 30 miles of biking, hiking, running and kayaking. Even better? You won’t have to cross a city street!

Free Way to Have Fun: Wander among the 55 sculptures in downtown Sioux Falls on the SculptureWalk, including the massive Arc of Dreams sculpture spanning the Big Sioux River.

Local Dream Job: Food blogger, so you can sample Sioux Falls’ top-notch food scene on the regular. There are more than 700 restaurants here, including some led by celebrity chefs. Chris Hanmer, winner of “Top Chef Just Desserts,” is here, as well as Sanaa Abourezk, who appeared on Food Network’s “Beat Bobby Flay” and has been recognized by the James Beard Foundation.

Read More:
6 Reasons to Move to Sioux Falls, SD Right Now
Sioux Falls is Home to One of the Coolest City Parks in the US
What a Budget of $300,000 or Less Will Get You in Sioux Falls