Feeling adventurous? Add these one-of-a-kind races (in some seriously awesome places) to your bucket list. 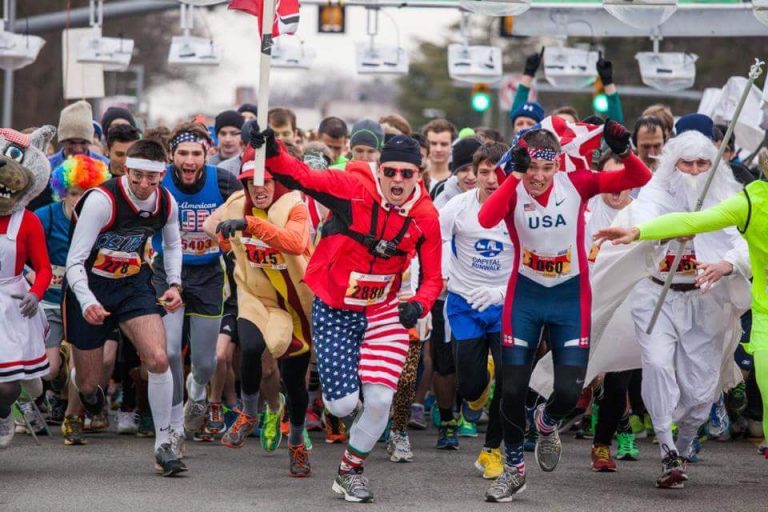 When you visit a city for the first time, it can be hard to know where to start to get a sense of the local flavor. Do you check out bars and restaurants? Museums and parks? Take a guided tour?

We have a suggestion: Join in the festivities during the town’s annual running or walking race. Not only will you see different parts of the city, geographically speaking, but you’ll also get a sense of the people who live there and what they care about.

Whether you’re a hardcore endurance athlete, a casual jogger or an enthusiastic spectator, running races can serve as a window into a city’s personality. For inspiration, here are ten cities around the country that host unique races you won’t find anywhere else.

Held every June in Northern California, the Dipsea Race has been going strong since 1905. The race starts in downtown Mill Valley and winds 7.5 miles over steep hills and several flights of stairs. The 1,500 participants jog through Mt. Tamalpais State Park, Muir Woods and the Golden Gate National Recreation Area before finishing at Stinson Beach.

Aside from the often-treacherous terrain and stunning views, the race is known for its camaraderie – runners frequently help each other get up off the ground when they fall along the route, says Dave Albee, a member of the race committee.

“The bulk of the entrants are from Mill Valley,â€ Albee says. “It is a very much a family-oriented race as it connects and touches multiple generations of families who, by tradition, have competed in the race.”

Held on Memorial Day, the annual Bolder Boulder 10K blends wacky race-day traditions with the solemnity of honoring those who died serving our country. This race has been a tradition in Boulder, CO, since 1979 and gives the roughly 50,000 participants a scenic tour of the city’s various neighborhoods. The race ends with a moving ceremony honoring military service members at the University of Colorado’s Folsom Stadium.

While some athletes take the race super seriously, others walk or jog with their family members in quirky costumes. Along the route, you’ll find belly dancers, slip-n-slides, tons of live music and people handing out jello shots and bacon. Race officials decided many years ago to fully embrace the fact that the race has become an annual party for Boulderites.

“The Bolder Boulder gets to help be a part of celebrating the specialness and the uniqueness of Boulder,â€ said race director Cliff Bosley, whose father Steve Bosley founded the race 40 years ago. “We do bring the community together on race day, and the course winds its way through and connects with the community.”

If you’re a World War II buff, you may remember the tragic Bataan Death March, during which Japanese troops forced thousands of sick and injured American and Filipino soldiers to march 65 miles to confinement camps. Approximately 10,000 men died during the march, including more than 800 New Mexicans. That’s why exercise enthusiasts and casual hikers alike have participated in the grueling Bataan Memorial Death March every spring for the last 29 years. The 26.2-mile route through the high-desert terrain of the White Sands Missile Range just outside of Las Cruces is a somber reminder of war in more ways than one, with dozens of wounded warriors and veterans participating each year.

Of course, participants still enjoy themselves during this challenging race – some choose to enter the “heavyâ€ division and carry a 35-pound pack along the route. Many students in the Reserve Officers’ Training Corps participate on teams, battling to be the fastest group to finish together.

Despite what the name suggests, this race is actually just a 5K, but don’t let that fool you into thinking it’s easy. The race gets its name from the fact that participants actually run up and down a mountain called Mount Marathon, which averages a roughly 34-degree incline (many runners wear gloves so they can scramble upward without tearing up their hands).

The Mount Marathon race takes place every Fourth of July in Seward, AK, a small port city located about 130 miles south of Anchorage. Aside from the race, Seward takes celebrating the Fourth of July holiday very seriously – the town kicks off the celebration at 12:01 a.m. with fireworks! And as soon as the sun rises, street vendors are on the scene pawning food and trinkets ahead of an annual parade.

This 10K road race gives participants the chance to get to know two historic South Carolina cities, Mount Pleasant and Charleston. Plus, runners get to enjoy the view from the Arthur Ravenel Jr. Bridge, which crosses the Cooper River. Dozens of bands and musicians dot the race route, which helps keep runners upbeat and motivated. Afterward, lots of families stick around to attend a festival at the finish line.

This race is short and sweet at just one mile, making it perfect for runners and walkers of all speeds. And with its 7 p.m. start-time and dog-friendly attitude, the Liberty Mile has more of a block-party vibe than your average race. The straightforward route takes runners through the heart of downtown Pittsburgh, giving them a chance to race along the normally bustling Penn and Liberty avenues. After finishing the race, participants can stick around and watch as the country’s fastest milers run the same route in less than four minutes! Many runners also grab a bite to eat afterward at the many restaurants and bars in the Cultural District and Market Square.

“(The race) brings the community together because it offers an ideal fitness distance for every runner, regardless of age or ability,â€ says Kelsey Emch, a spokeswoman for the race. “Whether you are a beginner running their first race, or a seasoned runner wanting to see how you can improve your mile time or a professional athlete competing for the $30,000 prize purse, there’s a heat that’s perfect for you.”

This iconic race has been taking place in the small town of Falmouth, Massachusetts, since 1974, just as road running was gaining in popularity. The tradition lives on each August as some 12,000 runners take to the streets to complete the 7-mile course. A majority of the course travels along Martha’s Vineyard Sound, giving runners a sea breeze as they make their way around the peninsula. One patriotic tradition we love? There’s always a giant American flag welcoming runners to the finish line.

“What makes our race unique, besides its 7-mile distance along the scenic shores of Cape Cod, is that it’s such a great blend of world-class and casual, everyday runners, with thousands upon thousands of spectators lining the course every year, rain or shine,â€ says the race’s general manager Jennifer Edwards.

This 12K race has been a Spokane, Washington, tradition for 42 years. It’s designed to be a race for all abilities, with running, walking and wheelchair waves. The Bloomsday course takes runners on a scenic tour of the Spokane River, which features prominently in the city’s geography. “The course follows the river, crosses it twice, weaves in and out of the river gorge, and finishes right above a stunning waterfall. Bloomsday celebrates Spokane’s natural environment beautifully,â€ says Don Kardong, race director.

Beyond that, the race is all about camaraderie and family. Adults from the area often return to their hometown for the race, which is practically a Spokane holiday. “Spokane prides itself being family oriented, and Bloomsday fits that perfectly,â€ Kardong says.

The AJC Peachtree Road Race got its start in 1970 when a group of around 150 runners gathered in a department store parking lot to run a 10K through Atlanta. The annual Fourth of July race quickly grew, with thousands of people running through the city to the finish line at Piedmont Park. Today, organizers have had to cap registration at 60,000 runners because the race is so popular.

“The diversity and eclecticism of the city are on full display,â€ says Jay Holder, a spokesman for the Atlanta Track Club, which organizes the race. “The entire Atlanta community embraces this event and takes pride in it, year in and year out. Besides the 60,000 participants, hundreds of thousands of people line the streets to cheer on and support the runners and walkers. Businesses open their doors early. Neighborhoods host parties. It’s a city-wide celebration.”

What started as a quirky tradition between friends has become a beloved city tradition and a rite of passage for students at North Carolina State University. The annual Krispy Kreme Challenge begins on the North Carolina State campus, sending runners (who are often adorned in crazy and/or skimpy costumes) 2.5 miles through historic downtown Raleigh to a Krispy Kreme donut shop, where they consume (or attempt to consume) a dozen glazed donuts. The true challenge comes next: running the 2.5 miles back to campus with a full stomach and a serious sugar rush.

This race is more than just crazy college antics: the whole city of Raleigh gets involved, and the race has raised more than $1.5 million for the UNC Children’s Hospital.