Gorgeous, year-around sunshine isn't the only reason to pack up and head to this city. 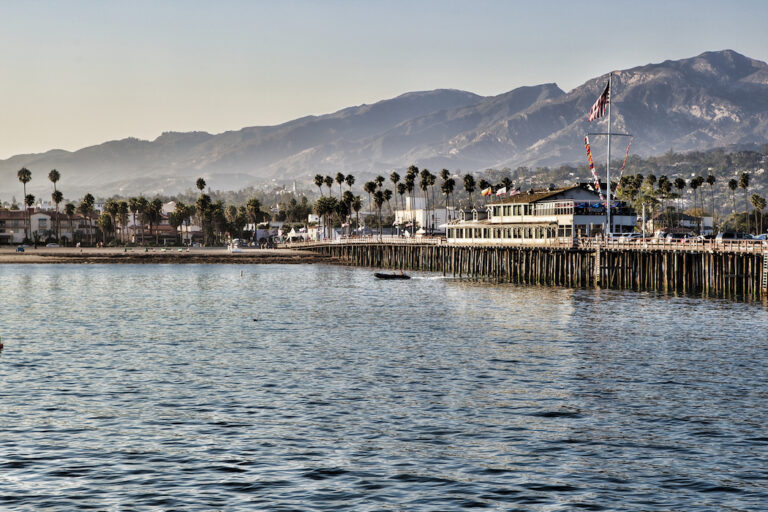 The charming city of Santa Barbara is located between the steep hills of the Santa Ynez Mountains and the Pacific Ocean. It’s a popular tourist and resort destination, but why visit when you can live here full time? From the beautiful weather and Spanish culture, to the frequent festivals and delicious dining, there are countless reasons to call Santa Barbara home.

Why Santa Barbara is the best place to retire in the U.S.

It would be a faux pas if we didn’t brag about the California sunshine for a minute. The warm California climate gives you a free pass to enjoy the great outdoors 12 months out of the year. That means year-round barbecues, picnics, beach walks, kayaking, surfing, and other outdoor activities. So grab your sunscreen and get outside—this weather is basically the best.

2. The Spanish history and culture

Everywhere you turn you see nuggets of Santa Barbara’s rich cultural history and Spanish heritage. There are plenty of historical places to explore, like the Old Mission Santa Barbara, one of 21 missions in California’s Historic Mission Trail, or El Presidio, the last of four military fortresses built by the Spanish. The Spanish Revival architecture is one of the city’s greatest charms.

Why Santa Barbara, CA is one of the best places to live

The people of Santa Barbara probably run and hike more than just about anyone you’ve ever met. And can you blame them? With the sunny weather and perfect temperatures, you can’t help but get outside. Whether you’re soaking up the sun on East Beach, hiking Gaviota Peak, or paddle boarding along the coast, you’re going to be having so much fun you won’t even know how many calories you’re burning. Pro tip: treat yourself to some famous McConnell’s Ice Cream when you’re ready for a break from all the activity!

A little bit of this, a little bit of that—that’s basically the nature of the Santa Barbara geography. This beautiful and historic city is nestled between the foothills of the Santa Ynez Mountain range and the Pacific Ocean, giving you the best of both worlds when it comes to mountain peaks and shorelines. Just ask any Santa Barbaran—there’s something for everyone here.

SB out of your price range? The 5 Most Affordable Cities in California

Festival fever runs high in Santa Barbara. You’ve got just about any festival and celebration you can think of here. The Santa Barbara International Film Festival, the Old Spanish Days Fiesta, the Avocado Festival, Rods & Roses, and First Thursdays are just a few of the local events found in the city. That’s not even counting some of the more traditional celebrations, like Fourth of July and movie nights at the courthouse.

Santa Barbara has the highest number of restaurants per capita of any other city in the country. And if that’s not enough, wine country is just over the hills. Santa Barbara produces some of the state’s favorite wines, though. Take a trek through the city and you can find numerous wineries and tasting rooms to pop in and do a little taste testing for yourself.

Love food? Check out The 10 Best Foodie Cities in the U.S.

The neighborhoods of Santa Barbara each come with their own charm and feel. You’ve got the small-town beach charms of Carpinteria and the vibrant heartbeat of State Street in Downtown Santa Barbara. But you can also wander through the beautiful Riviera, which resembles the Mediterranean coast of France, or traipse to the top of The Mesa and take in all the scenic views. Each little pocket has its own unique character.

The city is constantly investing in and churning out some of the country’s brightest young professionals. University of California Santa Barbara is a public research university with faculty that include six Nobel Prize laureates, one Fields Medalist, 29 members of the National Academy of Sciences, 31 members of the American Academy of Arts and Sciences—and more. And if that isn’t enough to knock your socks off, Santa Barbara City College is renowned as the No. 1 community college in the nation.