Skip to content
Home > CA > Where to Live Now > Moving to California? Here’s Everything You Need to Know

California is a laid-back paradise with pristine beaches and hip, bustling cities waiting to be explored. 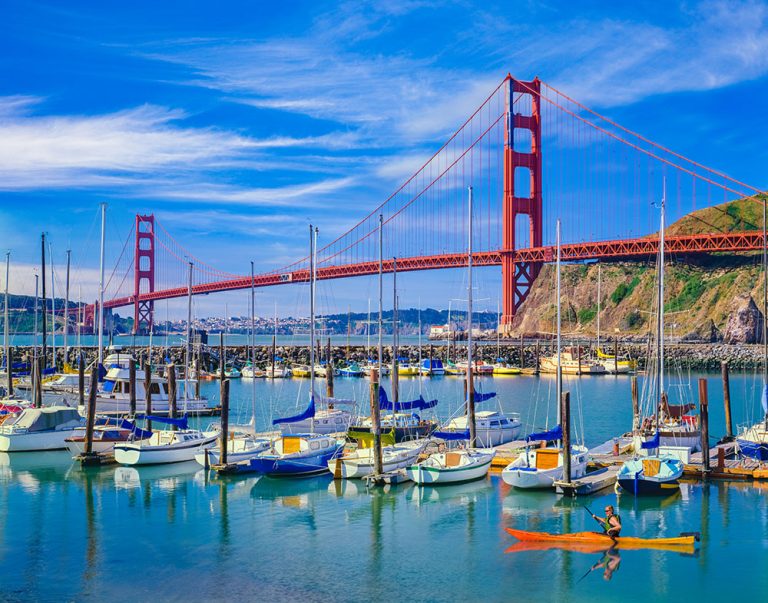 Stretching along the west coast for nearly 840 miles, California’s size and diversity offers a place for everyone. It’s a state known for its booming tech and agriculture economies, but is also a nature-lover’s paradise full of sunshine year-round and landscapes ranging from mountains to pristine beaches and deserts. Dreaming of moving to California? We put all the information you need, from cost of living to things to do, in one convenient place:

If you’re a fan of sunshine and warm weather, you’re in luck. Much of California has a Mediterranean climate, meaning warm and dry summers with cooler, wetter winters. Summers along California’s coastline are mild, with August highs of around 70 degrees. Inland, in cities like Burbank, summers get warmer and can see highs of 95. Meanwhile, California’s southeastern region and Death Valley can get to 120 degrees and boasts some of the hottest temperatures in the world.

Each city in the Golden State offers a unique living experience, but Palo Alto and San Jose are two of our favorites. Palo Alto has scored a spot on our annual Top 100 Best Places to Live list due to its cool, tech-centered culture and year-round margarita-on-the-patio weather. San Jose is in the heart of Silicon Valley, and although it’s California’s third-biggest city, it boasts small-town charm. Its proximity to nature and other fun California cities make it a winner in our eyes.

California is an economic powerhouse. Since 2010, the state has singlehandedly accounted for a whopping 20 percent of the nation’s economic growth, and unemployment rates in cities like San Francisco are at an all-time low. In fact, California has the world’s sixth-largest economy. So what are the big industries? Tech, of course. But California is also a leader in the tourism and agriculture industries, and it yields more crops than any other state in the nation.

Work for the Mouse

Some of the biggest tech companies in the world are headquartered in California’s Silicon Valley, including Apple and Intel. Cupertino-based Apple employs 98,000, but it’s Wells Fargo who takes the cake for most employees with 264,000! Mickey Mouse is also a top employer in California, and the Walt Disney Company hires in a variety of fields including entertainment and resorts.

Look Out for Celebrities

California is a huge state, and there’s tons to do for just about anyone. Like to people watch? Los Angeles is the celebrity hub of America, and if you hit the right spots (like the hip lunch spot Alcove) you may just see your favorite celeb. Disneyland, the “Happiest Place on Earthâ€ is also located in the Golden State. If you’re more of an outdoorsy person, the state boasts some of the country’s most beautiful beaches, including picturesque La Jolla Cove along the state’s southern coastline. Yosemite National Park, Sequoia National Park and Joshua Tree National Park are all beautiful natural wonders perfect for exploring.

All the Sun Comes at a Price

To live in this sunny state, you’ll have to have deep pockets or keep on a tight budget, as California’s cost of living comes in at 43 percent higher than the national average. Housing is the biggest expense for California residents. If you want to live in San Francisco, you will have to shell out $4,650 on average for a two-bedroom apartment–that’s three times more expensive than other U.S. cities. Luckily, some California cities have remained much more affordable, and no matter where you live, utilities often cost California residents significantly less than in other states.

California is known for its highways and road systems. Unless you’re in a bigger city, public transportation isn’t the best way to get around. That being said, the San Francisco Bay area has the best public transportation in the state, and is comprised of the world-famous cable cars, the muni subway and light rails. If you want to go green, San Francisco, Napa, and Santa Monica are becoming increasingly bicycle-friendly.

More Colleges Than Any Other State

Is This California Town the Happiest Place in America?

There’s an intense rivalry between Southern and Northern California, so choose wisely when you’re deciding where to live. NorCal is known for its variety of food options, while SoCal’s Mexican food is unrivaled. Weather-wise, it’s generally cooler and wetter in the North when compared to the South’s consistently sunny weather.

Whichever you choose, you’re sure to love it.