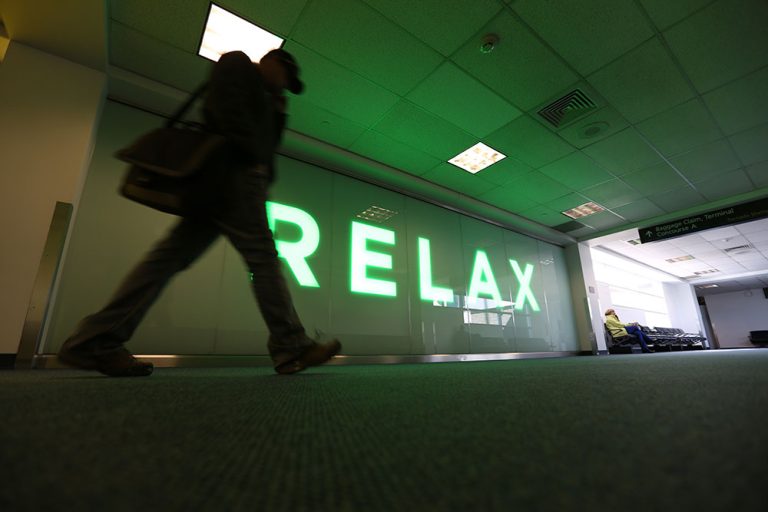 Blame it on the beady red eyes of the hulking blue mustang near the entrance of Denver’s airport. Or maybe it’s the gargoyles perched in baggage claim? Come to think of it, the eerie images embedded in the airport’s murals might have something to do with it…

Whatever it may be, though, the Denver International Airport has been shrouded in mystery and has spurred a good deal of conspiracy theories since it first opened in 1995.

“We know there are some true believers out there,” says Emily Williams, a DIA spokesperson. Some people, she says, even believe the airport’s tunnels will serve as a secret hideout for the world’s elite during the apocalypse.

While most airports would resist such wild claims, this is Denver, a place that’s proud of its quirks and unafraid of a little weirdness. So instead of telling passengers, “There’s nothing to see here; move along, now!” the Denver airport is leaning into its conspiracy theories. Embracing them, actually.

As the airport undergoes a multi-million dollar renovation, signage throughout DIA straight-up teases travelers. Take for instance, this sign:

What are we creating?

A. More space for interesting artwork

B. A better airport experience

Or, another one that taunts:

“Under Construction Or Underground Tunnels?”

Since it’s October, a month that celebrates all things sinister and spooky and mysterious, we decided now is the perfect time to explore some of the Denver airport’s best conspiracy theories.

Without further ado, we present you with five of the best conspiracy theories at DIA:

The Conspiracy: The Blue Mustang is Evil

When you make your approach to DIA along Peña Boulevard, the main road to the airport, a 32-foot bright blue fiberglass mustang greets you. Or terrifies you. Or both. The 9,000-pound sculpture – with bright, glowing red eyes – has earned nicknames like”Bluecifer” and “Satan’s Steed” over the years.

Still, the rearing mustang is beloved by many.

“People either love him, or think he’s really scary,” Williams says. “Here at the airport we love him. We think he does exactly what good art does: He inspires conversation and gets people’s attention.”

But giving credence to the conspiracy theories is the fact that the artwork actually killed its creator, sculptor Luis Jiménez, when a section of the sculpture fell on his leg, severing his artery. That was in 2006, two years before Denver adopted the sculpture, and it has led some to believe the mustang is cursed.

The Conspiracy: The Gargoyles are Evil, Too

Actually, the airport’s bronze gargoyles are getting some rest right now as they’ve been stashed away during construction.

But, yes, DIA does have two resident gargoyles who are perched in open suitcases and usually live above baggage claim areas. The public artwork is known as “Notre Denver.”

Historically, gargoyles are put on buildings to protect the sites, Williams explains. So, at DIA, they’ve functioned in an adapted guardian role, helping with the safe arrival of baggage. When they are cleaned, staff will often find tokens, coins and other offerings that have been made to the gargoyles.

The Conspiracy: The Denver Airport Is an Underground Hideout for the World’s Elite

Perhaps the most common conspiracy theories at DIA surround the underground tunnels. There’s a lot to unpack here, but some of the rumors floating around have included that the tunnels are a hideout for the global elite in the event of an apocalypse. Or, alternatively, that the New World Order command bunkers are situated below the airport. Other theories have suggested alien headquarters or that the tunnels connect to the North American Aerospace Defense Command in Colorado Springs, about 100 miles south.

Indeed, there are several floors underneath the airport. The most visible use of this space is the passenger train that connects the terminal with three concourses. Underneath the airport’s main level is a bustling place of business, Williams says. But, sadly, you won’t find the Illuminati here. The real purpose of the space is to move baggage, and there are also workshops, as well as storage space and printing facilities. About 1,000 people work down below, Williams says.

Indeed, some of the large-scale murals in the airport contain eerie images. Artist Leo Tanguma’s “In Peace in Harmony with Nature” mural has a fiery backdrop, a child in a casket and a weeping boy carrying a squirrel (seriously). But the second half of that mural features people from around the world celebrating together as well as live, thriving animals. His other mural, “Children of the World Dream of Peace,” depicts stark contrasts, too. One section includes a soldier in a mask with a gun and sword and another shows people from around the world under a rainbow ribbon and what appears to be the corpse of the soldier. The imagery has further fueled the “one world government” theories, and others have interpreted the murals to hint at Russian hegemony or predict 9/11.

According to airport officials, though, Tanguma has stated that while his murals represent man-made destruction of the environment and genocide, the messages are overall about peace. The diptych-formatted murals feature a dystopian world and a harmonious world and are meant to give hope.

The Conspiracy: A Mysterious Time Capsule

The marker for the time capsule in DIA makes mention of the “New World Airport Commission.” Which is fine, except for the fact that no such commission exists. Could it be a (not particularly clever) code for the New World Order? Conspiracy theorists sure think so! The best explanation airport officials have, though, is that the New World Airport Commission was a more generic name given to the local politicians and businesspeople who helped fund the airport’s construction. Others have pointed out that the marker is associated with the Freemasons, a charitable organization that also are subject to lots of conspiracy theories about being a secret society. Good eye, because the airport confirms the the marker does contain the Masonic crest. The plot thickens…

So, are you now hoping for a long layover at DIA to suss out some of these conspiracy theories on your own? We’ll meet you there.