City center sees influx of public and private development as it rebounds from devastating derecho and tornado. 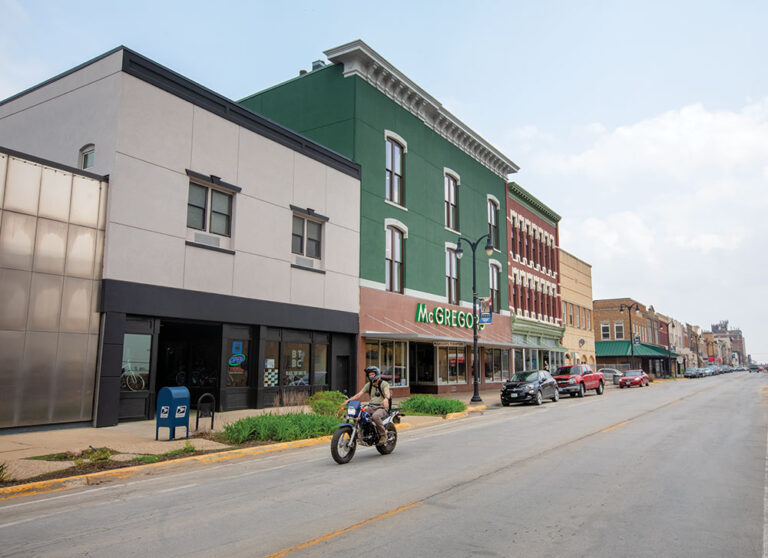 Historic downtown Marshalltown is hitting all the right notes. Renovations are underway to create more residential opportunities, businesses are improving storefronts, public spaces are drawing visitors, and cafes and restaurants are popping up alongside interesting retail shops in a pedestrian-friendly atmosphere.

The city continues to recover from a 2018 EF3 tornado and a 2020 derecho with nearly 100 mph winds. The tornado destroyed several downtown buildings, including Black Tire Bike Co. Owner Matt Gerstandt took shelter in the building’s basement and emerged to find part of the structure had collapsed. Today, the bike shop is back in operation in a renovated space that offers a better employee and customer experience.

Deb Millizer, executive director of Marshalltown Central Business District, says work continues downtown to recover from the tornado and derecho. She said some buildings in the district are targeted for removal while others are being renovated through public and private investment.

Deconstruction of the remaining six damaged buildings from the catastrophic weather events will clear the way to attract developers to construct new projects and spaces as early as 2023. A boutique hotel, additional public spaces and more small businesses are on the city’s wish list.

Millizer says two key buildings that will see historic face-lifts are located at Main and Center streets. Meanwhile, Zamora Fresh Market is completing the renovation of its historic facade, and three other buildings downtown are undergoing renovations that will include upper-story housing and first-floor retail space.

The City of Marshalltown also received a $550,000 upper story housing grant from the Iowa Economic Development Authority to assist the developers in creating apartments at the Willard’s building downtown.

Willard’s Furs and Fashions closed its doors in 2021 after more than 150 years in business. The renovation project will breathe new life into the circa 1860s historic building. “We are continuing to recover and grow as people invest and reinvest in our downtown,” Millizer says.

You’ll Fall in Love with this Gem

Gallery Garden is a visual treat, highlighted by a wall of more than 1,000 plants. Sustainable technologies in the park capture rainwater stored in underground harvest tanks and operate a fountain. Solar panels power lights and pumps in the park.

Marshalltown’s IMAGINE community improvement initiative in the mid-2000s prompted calls for downtown revitalization. Since that time, more than $90 million in public and private investment has gone into downtown, including creating dozens of residential units.

Entrepreneurs and business partners Barb Hagstrand and Jeff Mitchell saw the potential of downtown becoming a cultural gathering place for the community when they purchased and renovated the Kibbey Building, home to the event space Van Gogh’s and the Gallery Garden Park. “When we purchased it in 2014, it was really on its last leg,” Mitchell says.

Built in 1895, the building sat mostly idle for the past several decades. In addition to the event space, the property boasts four contemporary loft apartments and a wine bar. “There’s life in this property, and it’s a beautiful structure, really an anchor in downtown,” Mitchell says.

Why Do Business in Marshalltown, IA?

Find out why these 3 entrepreneurs chose to live (and succeed) in this bustling Iowa town.

Downtown is an important community gathering point for murals and public art installations. With Gallery Garden, Hagstrand and Mitchell created a public art space that is a model for downtowns throughout the country. While the park is available for private events, a portion of it is open to the public daily. “People come and eat lunch in the park,” Mitchell says. “We wanted it to be a place for people to gather and relax and enjoy themselves.”

Mitchell says the investments in downtown are paying off for the greater area of Marshalltown.

“Very few communities thrive without a thriving downtown,” he says. “We are seeing downtown Marshalltown come to life and draw young people into the city center. That’s bringing more creativity and economic activity to the city.”