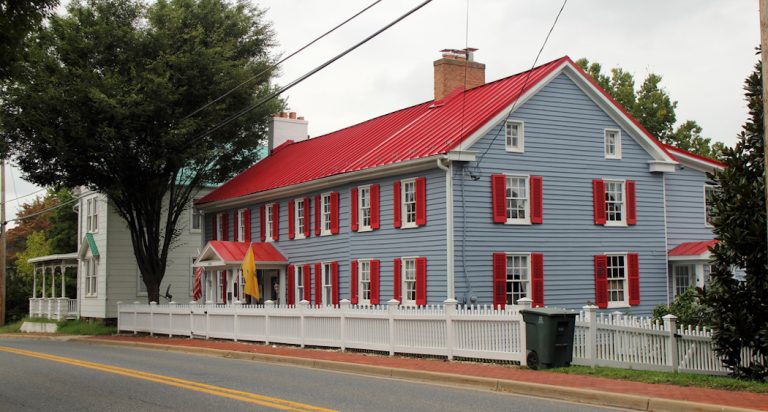 Poolesville / Courtesy of Mr.TinDC under a CC 2.0 license.

Ask a Maryland resident to name the best things about the Free State and he or she will likely highlight the four distinct seasons, the ready accessibility of both the beach and the mountains, and how Washington D.C. is easy to visit—and easy to escape. They may also proudly talk about their NFL franchise, the Baltimore Ravens, and how enjoyable it is to take in an Orioles game at Camden Yards.

Food is likely to come up as well, as eating the sweet meat of Maryland blue crabs — and a seemingly endless assortment of crab-based foods — is a way of life within the state’s borders. But Maryland is more than Baltimore, College Park and Annapolis, it’s also home to some of the best small towns in the Mid-Atlantic region, with the five best in the state highlighted below.

Proximity to the Chesapeake Bay gives Easton residents and tourists excellent opportunities to enjoy outdoor activities like canoeing, kayaking, sailing and crabbing adventures. The city is situated on Maryland’s scenic Eastern Shore and features six distinct neighborhoods and a variety of housing options and prices. The community has an active arts and culture scene, and several nightspots are thriving. Residents have good healthcare choices, and the city’s downtown district has many eye-catching buildings of Colonial and Victorian architecture.

Elkridge (established in 1734) is a census-designated place in Howard County that has grown steadily in recent decades, its population now 17,700 people. The home ownership rate is 91 percent and median household income is $115,124. Elkridge has a lot to recommend it, including a mild climate and a modest average commute time of 27 minutes. Residents enjoy frequenting local parks like Patapsco Valley State Park, which offers a diverse array of recreational activities, including hiking, fishing, camping, canoeing and mountain biking.

Kemp Mill is an ethnically diverse census-designated place in Montgomery County, which boasts an exceptionally low crime rate and a well-educated population where 60 percent of all residents have earned a B.S. degree or higher. Median household income is $107,746, the median home value is more than $386,000, and the community exhibits strong healthy-lifestyle indicators.

Much like Kemp Mill, the town of Poolesville in western Montgomery County is a tightly knit community with very low crime rates. The town’s motto is “Small Town Character, Down-Home Charm,” which is in keeping with an area that’s rich in history. There are ample opportunities for outdoor recreation (especially for hikers and bikers), and agritourism is also an integral part of the community, as Poolesville features multiple farms, orchards, vineyards and wineries where visitors and residents alike can shop or visit. The home ownership rate is very high (93 percent) and just 24 percent of residents are single, while the median household income is $109,196.

Finally, there’s Takoma Park, a mostly residential suburb of Washington D.C., which we named one of the Top 100 Small Towns 2015. The city (established in 1890) features a remarkably robust arts scene for a city of its size and is home to the Takoma Park Folk Festival and the Takoma Park Street Festival. The top industries in the city are health care and education, with Washington Adventist University and Montgomery College among the largest employers. Takoma Park is sometimes referred to as “Azalea City,” owing to the many flowering azalea bushes that brighten the area. The city’s population is young; more than a third of all residents are single and the median age is just thirty-five. The home ownership rate is 44 percent, while the median rent is $2,500 per month.