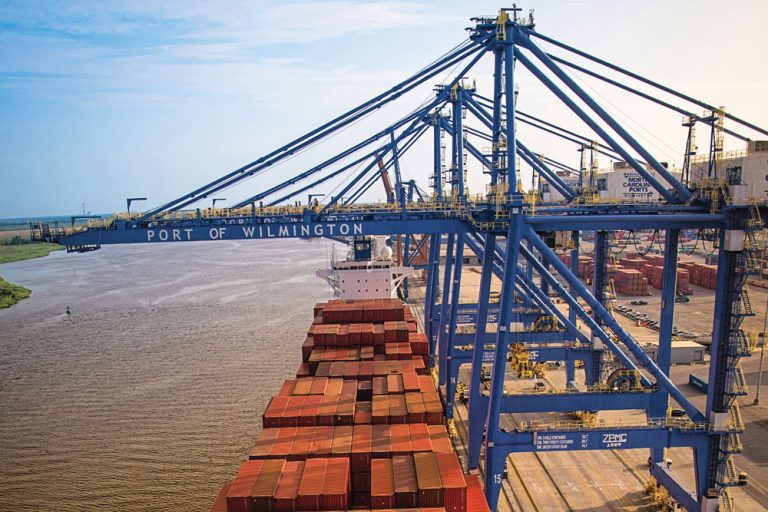 astern North Carolina is experiencing massive investment in its highways, rail systems and waterways, giving it a logistical advantage for moving products in and out and making it an ideal location for access to major markets along the U.S. Eastern Seaboard as well as Europe, Africa and South America for export-minded companies.

The North Carolina ports at Wilmington and Morehead City provide businesses with important global access, and recent service improvements and expansions only serve to enhance those facilities for the future.

“We’ve made a steadfast commitment to better serve the Carolinas,” says Paul J. Cozza, executive director of the North Carolina State Ports Authority. “With four major recent container service announcements, we are preparing for record activity throughout the next fiscal year.”

With the addition of new cranes, a turning basin expansion project, various berth improvements and the expansion of the container yard, North Carolina Ports will pump over $150 million into its infrastructure over the

“North Carolina Ports will continue to be at the forefront by adapting to commercial developments across the Southeast,” says Greg Fennell, chief commercial officer for the ports authority.

The Port of Wilmington has state-of-the-art, post-Panamax cranes and support equipment as well as ample warehousing capabilities. The port has one of the highest crane productivity and truck turnaround rates on the East Coast.

The Port of Wilmington is one of the few Southern ports with readily available berths and storage areas for containers and cargo. The newly installed on-terminal Port of Wilmington Cold Storage (PWCS) is a state-of-the-art refrigerated warehouse with nearly 3 million cubic feet of freezer and cooler space.

The Carolina Connector Intermodal Rail Terminal (CCX), a $270 million project located in Edgecombe County near Rocky Mount, is a collaboration of CSX Transportation, the Carolinas Gateway Partnership and the State of North Carolina.

The intermodal project, which is expected to be completed in 2019, will convert freight from highway to intermodal rail, which utilizes the efficiencies of double-stacked containers.

The project will provide greater market access to North Carolina and Virginia ports at lower cost.

The terminal will be equipped with state-of-the-art sustainable technology and will sort and ship containers primarily consisting of consumer goods such as food, furniture and appliances.

The CCX will complement the existing air intermodal Global TransPark (GTP) near Kinston. The GTP has freeway and rail service in addition to a 11,000-foot runway that can handle the largest cargo aircraft.

Eastern North Carolina has also been earmarked for three new interstates. The Federal Highway Administration approved making U.S. 264 a future interstate. The highway, between Greenville and Zebulon, will be known as Interstate 587.

Two other interstates that will run through the region have also been designated. U.S. 70 will become Interstate 42, connecting Raleigh to Morehead City. U.S. 64 and US 17 are designated  Future I-87. The entire new I-87 will ultimately connect the Port of Norfolk to Raleigh, which will enhance the economic prospects of the northern portion of Eastern North Carolina.

“One of the first questions business investors tend to ask about a region is the distance to the nearest interstate,” says Kevin Lacy, director of transportation, mobility and safety for the North Carolina Department of Transportation. “The interstate shield is a very important symbol when it comes to future economic development.”

One of the major manufacturers in the region has full confidence in the infrastructure resources of Eastern North Carolina.

“Major highway improvements planned will only enhance our region’s capabilities to help business distribution,” says John Gardiner, vice president of manufacturing for Hyster-Yale Americas, which has headquarters as well as a major lift truck assembly plant in Greenville. “These recently announced improvements can only attract business and distribution centers to the region.”