OBX, History and Beauty Make Eastern North Carolina One for the History Books

From colonial settlers to the Wright Brothers, Eastern North Carolin has plenty of stories to tell 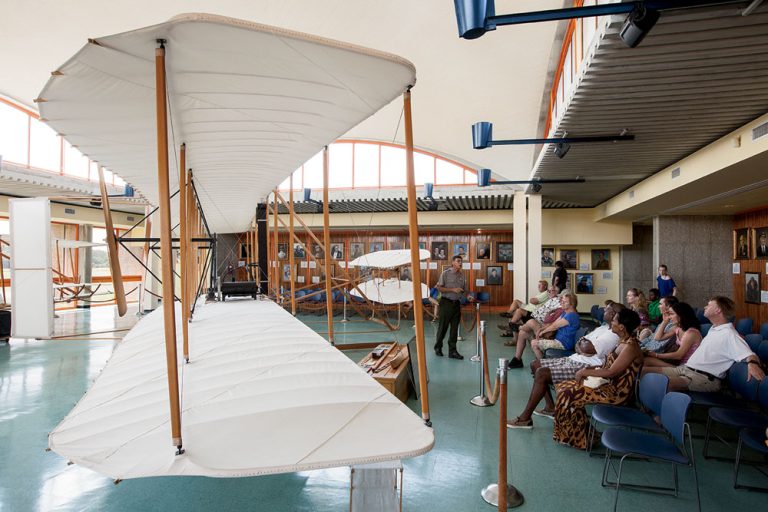 When it comes to writing the history of the United States, Eastern North Carolina has been an important character since the opening chapter.

The region’s major contributions date all the way to the first arrival of English settlers – more than 30 years before the Mayflower Pilgrims made it to Plymouth Rock – and extend through the Colonial era, the Civil War and the 20th-century invention of mechanically powered flight.

“Boston and Plymouth Rock, we call those places the newbies. They’re the new kids on the block,” jokes Lee Nettles, executive director of the Outer Banks Visitors Bureau. “Our area is full of all kinds of interesting history. It’s just an embarrassment of riches around here for history aficionados.”

Roanoke Island and The Lost Colony

It’s a history that begins on Roanoke Island, where a group of 117 English settlers who had been recruited by Sir Walter Raleigh arrived in July 1587 and attempted to establish the first colony of its kind in the Americas. Barely a month later, one of the colonists gave birth to a girl, named Virginia Dare, making her the first English child to be born on American soil (in an area that is now called Dare County).

When English ships returned to the island in 1590 with additional supplies, there were no signs of the settlers. The group became known as The Lost Colony, and their story has been told every summer since 1937 through an outdoor drama production held at the Waterside Theater on the site of the original settlement. Actually, most of Eastern North Carolina can be a stage in terms of showcasing the region’s rich history. Attractions and historic sites abound, including the towns of Bath (which was founded in 1705 and is the oldest continuous settlement in North Carolina) and Edenton (an early state capital and home to the beautiful 1758 Cupola House).

The waterfront where the Pamlico and Tar rivers meet is the crown jewel of Washington, N.C.’s historic downtown. Boats as far as the eye can see are a backdrop for a waterfront that includes a boardwalk and a children’s park.

The NC Estuarium, billed as the first estuarium in the world, includes more than 200 exhibits and interactive displays that detail the region’s estuaries and coastal rivers.

Nature lovers will note that Washington is home to a variety of wildlife in their natural habitats.

Experience Eastern North Carolina with All of Your Senses

The history surrounding the pirate Blackbeard, who spent time living in Bath, also is prevalent in Eastern North Carolina (that is why the East Carolina University sports teams are called the Pirates). Blackbeard’s ship, Queen Anne’s Revenge, ran aground along the Outer Banks in 1718 and sank near Beaufort. More than 300 restored artifacts from the ship, including a cannon and medical devices, are on display at the North Carolina Maritime Museum in Beaufort. Many of those artifacts were preserved and documented in Greenville by East Carolina University scholars/scientists at the Queen’s Anne Revenge research laboratory, which is open to visitors.

“It’s a nice triangulation for people who are interested in nautical and pirate history,” says Sierra Jones, communications manager with the Greenville-Pitt County Convention & Visitors Bureau. “You can come to Greenville and tour the research laboratory, then go to Bath to see where Blackbeard’s residence was, and then to Beaufort to see the artifacts on display at the museum.”

And, of course, there is Kill Devil Hills/Kitty Hawk on the Outer Banks, site of the first airplane flight by the Wright Brothers in 1903. This is such an important moment in North Carolina’s history that it has long been included on the state’s vehicle license plates. The U.S. National Parks Service runs the Wright Brothers National Memorial, which will have a newly renovated visitor’s center in 2018.

“The National Park Service does an amazing job of retelling the Wright Brothers story and highlighting the perseverance and dedication that they had to make it all come to pass,” Nettles says. “It’s a beautiful park, and a great place to take a stroll and think about what’s been accomplished. That within the span of one generation, we went from the first flight to putting a person on the moon. And it all ties back to this area.”