Whether you're a newcomer or just visiting for the weekend, be sure to add these items to your must-do list. 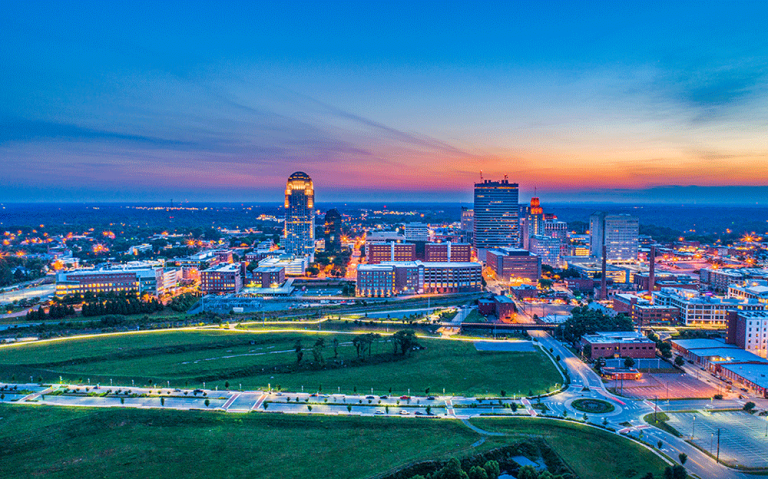 You’ve finally unpacked all your boxes! Now you’re ready to explore your new hometown. Or maybe you’re in town for a three-day weekend and want to see what this bustling North Carolina city has to offer. Either way, there’s plenty of things to do in Winston-Salem to fill your evenings and weekends with fun. Here are 9 must-visit experiences to put on your list:

The town of Salem, first established by Moravian settlers in 1766, remains intact today as an ode to the past located on the outskirts of downtown. Old Salem Museums & Gardens operates as a living history museum, featuring dozens of activities, learning experiences and demonstrations of daily life in the 18th century. It is open from 10 a.m. to 2 p.m. Wednesdays through Saturdays.

Here, you’ll find a community that exceeds expectations at every turn. Plus, you can enjoy small-town charm without sacrificing big-city amenities.

Speaking of history, be sure to check out the landmarks and prime destinations around your new town while cruising in a restored trolley car. Triad Trolleys offers daily Twin City tours plus special experiences, like comedy tours or a drive along the Moravian Cookie Trail (Winston-Salem holds the title of the epicenter of the Moravian cookie).

The City of Winston-Salem and other local employers officially recognize this holiday to commemorate African American cultural heritage and freedom. The largest local celebration, the Juneteenth Festival, has been hosted downtown by Triad Cultural Arts for the past 17 years, and it attracts thousands of attendees annually. The festival is held in Bailey Park and attendees enjoy music, dance, food, panel discussions, and arts and crafts.

Why You Should Do Business in Winston-Salem, NC

Diverse and thriving economy, along with a deep pool of talent and available land, are a huge draw for companies big and small.

4. Catch a film at this well-known festival.

Dedicated to showing the best new international films, RiverRun International Film Festival is an annual event that has been named by MovieMaker Magazine as one of the “50 Film Festivals Worth the Entry Fee.” The festival takes place over 10 days at a half-dozen venues throughout Winston-Salem. It is so well respected that it is used as an Academy Awards qualifier in two categories: animated and documentary shorts.

5. Venture downtown for some fun and food.

With an abundance of locally-owned restaurants, coffee shops and eateries, there’s plenty of cuisine to enjoy in Winston-Salem. In fact, there are more than 75 establishments in the downtown core. After your meal, stroll to Bailey Park in the Innovation Quarter and enjoy the outdoors. And if you are looking for an activity, you’re in luck. Numerous community activities are often held at the park, such as festivals and events, like Gears & Guitars, as well as movie nights, sunset yoga and more.

Why Is Winston-Salem a Great Place to Live and Work?

Regional efforts draw companies to Winston-Salem and beyond.

6. Take your family out to the ballgame.

One of the oldest traditions in Winston-Salem is cheering for the home baseball team. Minor-league baseball was first played here in 1905, and the city has had a franchise in the Carolina League since 1945, making it the oldest continuously operating team in that circuit. The franchise has been affiliated with the Major League Chicago White Sox since 1997, and it became known as the Winston-Salem Dash in 2009. The team regularly ranks at or near the top of the Carolina League in attendance each year.

The “write” stuff can be found at Bookmarks Festival of Books & Authors, an annual downtown event, which is the largest book and author festival in the Carolinas. It features author panels, book signings, story time and other family activities. Most of the events are free. Several streets near the Milton Rhodes Center for the Arts and Winston Square Park are closed to traffic during the four-day festival, and they are filled with exhibitor booths and food trucks.

Are you a lover of live music? Latin jazz this week, a Led Zeppelin tribute band next week and a disco party in between – this is the eclectic music mix you will find at The Ramkat, an 11,670-square-foot, two-level venue located in the Industry Hill neighborhood just north of downtown Winston-Salem.

Relax after all that adventure by enjoying a drink at one of Winston-Salem’s many breweries. There are nine within a 1.5-mile radius of downtown, and all of them offer distinctive tastes and flavors. Cool off with a refreshing IPA or fuel up with a tasty chocolate stout. It’s a well-deserved reward following a day of exploring all that Winston-Salem has to offer.

Five-story interactive children’s museum is scheduled to open in 2023 in Winston-Salem.