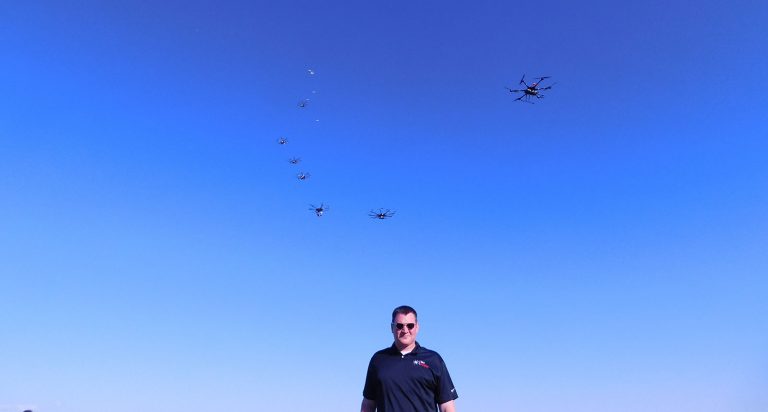 If you’re someone who looks to the sky when you think about your future, there’s one U.S. city that rises far above the rest: Grand Forks, North Dakota.

Grand Forks is a pioneer in drone technology, and accordingly, the region can stake its claim as the home of many “firsts” in the industry. It’s home to Grand Sky, the country’s first unmanned aircraft business and aviation park. The University of North Dakota offers the first-ever Unmanned Aircraft Systems (UAS) bachelor’s degree program. Oh, and perhaps most importantly? The very first hamburger delivery by drone happened at a municipal golf course here. (Dare we say it was delivered on the fly?)

With a university, the military and private corporations all specializing in unmanned aerial systems – plus wide open spaces ideal for flying – the Grand Forks region is a national leader and global destination for Unmanned Aircraft Systems research, testing and education. If you’re looking to pursue an education or career in drone technology, an industry that’s grown a staggering 600 percent in recent years, consider Grand Forks to be Silidrone Valley.

Here, a look at how Grand Forks has solidified its reputation as being a leader in drone technology and unmanned aerial systems, and why a move here could be a great way to jumpstart your career…

While unmanned aircraft technology is often discussed in the context of its military and surveillance applications, there’s tremendous growth potential for drones in the private sector as well. For example, drone technology is harnessed by medical supply companies looking to deliver medications to remote areas, by farmers creating detailed maps of their crops and photographers shooting aerial landscape photos.

To prepare graduates for a wide breadth of fields in unmanned aerial systems, in 2009, the University of North Dakota became the first to offer a UAS degree. A few years prior, and with the help of retired Senator Byron Dorgan, the University of North Dakota’s Odegard School of Aerospace Sciences developed the first Center of Excellence for UAS Research, Education and Training.

The university remains a leader in UAS, spearheading the effort to receive the FAA designation as a National Test Site, which is now the Northern Plains UAS Test Site, and working with the test site and others to help integrate UAS into the National Airspace System, says Dana Sande, Vice President of Business Development at UND Aerospace and Grand Forks City Council President.

“UND has the largest number of commercial aviation students in the world,” Sande says. “Many of these students have added UAS classes to their resume in order to make themselves more desirable and to have other career opportunities.”

Often, UND flight students are jointly flying next to unmanned aircraft in the National Airspace System and they have the opportunity to interact with big name UAS companies like Northrop Grumman and General Atomics.

With so many students educated in UAS, there’s a strong talent pipeline for companies to draw from, Sande explains. Also, UND has fast-track programs to help pilot graduates find employment with General Atomics as well as small, local UAS organizations – the number of which are growing every year.

An Entrepreneurial Ecosystem for UAS in Grand Forks

A couple of years ago, Mike Fridolfs and his wife moved from San Diego to Grand Forks where Fridolfs took a job as the site lead at Grand Sky for Northrop Grumman, a global defense contractor working with the U.S. military.

There’s much about the quality of life in Grand Forks that Fridolfs, and those who relocate here, appreciate. Commuters enjoy little traffic, plus the work-life balance is better, Fridolfs says, and he’s found a friendly intersection between work and personal life that makes for a close-knit community – you may run into and strike up a conversation with colleagues or a down-to-earth senator when you’re out to eat, for instance.

But one thing that really impressed Fridolfs about Grand Forks is not just the entrepreneurial spirit that thrives here, but how government, business and university leaders have the know-how and commitment to make real change and get things done.

Thanks to continued congressional support from state legislators like Senator John Hoeven, who pushed for the establishment of UAS test sites across the nation, the region’s investments have led to the development of Grand Sky, a 217-acre aviation park dedicated to drones. The site is adjacent to Grand Forks Air Force Base, which is an established leader in UAS and the central command for the U.S. Air Force’s Global Hawk mission. Vantis is a new statewide network for drones (another first in drone technology!) that can be likened to a highway in the sky. The Northern Plains UAS Test Site conducts critical research into the certification and operational requirements necessary to safely integrate UAS into the national airspace system.

A Region Poised for Drone Innovation

Beyond the infrastructure, though, there’s palpable excitement surrounding UAS entrepreneurship in the region.

Kids on field trips to Northrop Grumman get to fly an aircraft simulator, Fridolfs says, which gets them excited about potential careers in UAS and dispels any preconceived notions they might have about engineering jobs involving punching numbers into a system all day long.

As another example, when Wes Shover was starting a new enterprise and needed to implement UAS training, he went directly to the front doors of area farmers and asked if he could fly 15,000 feet above their farms. In other regions, he risked having the door slammed in his face, but in Grand Forks, he got 100 percent approval from the farmers he approached. The company he created, The Vidar Group – which is owned and run by former and current military operators – now provides a number of services, including rescue operations, air-to-ground subject matter expertise, simulation and training support.

“If it is safer, cheaper, or something humans just can’t do, then it will be a potential for an automated vehicle or aircraft to do in the future.”

Among the other UAS companies with a presence in the Grand Forks region is SkySkopes, the top drone service provider in the country, and Zipline, a global medical supply, which set up a test site in Grand Forks to test cold weather operations.

Airtonomy is an anchor tenant in the iconic Grand Forks Herald building as it morphs into a Technology Hub. The city-owned building is evidence of the growing tech center in the Grand Forks region, which is feeding off the data analytics, artificial intelligence and software needs of the growing drone industry.

“As UAS technology rapidly evolves, Grand Forks will be ground zero for such innovation,” Riedy says.

The ‘Sky is the Limit’ for Drone Careers in Grand Forks

In 2014, and as the 348th Reconnaissance Squadron commander, Amanda Brandt led the “flight of the Lady Hawk,” which became the longest flight without air refueling on record for a military aircraft.

The flight was led by an all-female flight and support crew, with more than 50 women working on the mission that kept a RQ-4 Global Hawk aircraft aloft for more than 34 hours. Plus, Mother Nature (a female force, Brandt points out) held off on an icing to give the team enough time to break the record.

Brandt, currently an aviation professor at UND, is also leader for a UAS girls summer camp, where children learn that drones aren’t just a hobby, but can be a path to important and lucrative careers. In fact, Research and Markets forecasts that the global drone service market will grow 51 percent between 2019-2027.

It’s impossible to even begin imagining what drone records can be broken in the future and what UAS careers can emerge for the next generation of pilots and entrepreneurs, Brandt says. But it’s certainly exciting to think about.

“If it is safer, cheaper, or something humans just can’t do, then it will be a potential for an automated vehicle or aircraft to do in the future. New UAS jobs and applications are forming every day,” Brandt says. “The sky really is the limit.”