6 Cities in North Dakota Where You Can Live Large

The living is easy in the Peace Garden State. 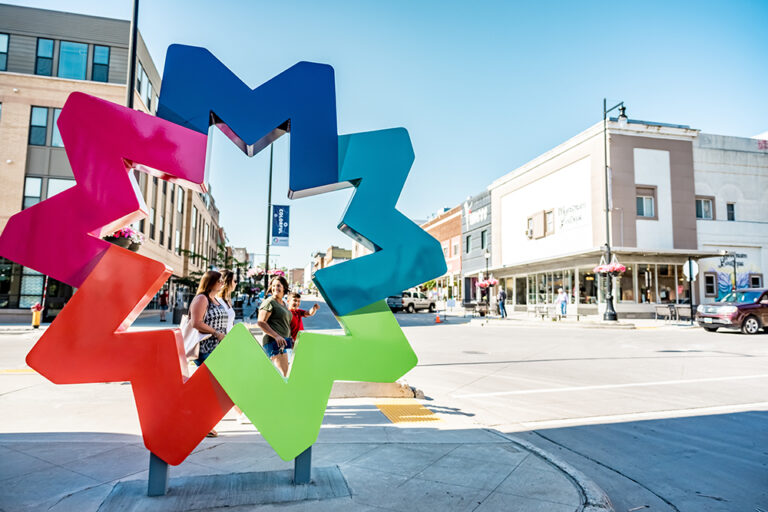 The state of North Dakota is a northern gem full of natural beauty, opportunity and some of the happiest residents around. The state may be known for its vast, rolling prairies, but it’s also home to several quickly-growing cities that boast a high quality of life without losing out on amenities that bigger cities offer.

“North Dakota cities are big enough to provide a variety of options that create unique experiences, yet small enough for you to develop deep connections and friendships with neighbors, shop owners, and community leaders,” said Katie Ralston Howe, director of Workforce Division at the North Dakota Department of Commerce. “The amenities you’ll find in North Dakota are affordable, making it possible to do it all.”

While you can’t really go wrong with living anywhere in North Dakota, these six cities topped our list thanks to their abundance of parks and recreation, affordability, things to do and booming economies.

Just west of Fargo, the city of West Fargo is often touted as the best in the state. According to Money.com, it was ranked #23 in the best cities in the country for 2020. West Fargo has a lot going for it. It is constantly attracting new businesses thanks to the fact that its cost of doing business is a whopping 15 percent lower than the national average. If you’re looking to purchase a house, the median home costs about $318,399 – $110,301 less than the median price in the country. Not only is it affordable, but it’s one of the fastest-growing cities in the state. It’s the perfect place to raise a family thanks to its extremely low crime rates, highly rated schools and vast network of parks.

The state’s capital, Bismarck, boasts the best schools in the state. But good schools aren’t all this Great Plains city has going for it. Bismarck is home to booming oil and gas industries and the headquarters of the huge energy and construction corporation MDU Resources. This healthy economy and constant growth have benefitted the city, bringing more jobs, endless recreation and a vibrant downtown with several cultural activities, including museums, the Bismarck Zoo and the Bismarck-Mandan Symphony. Located along the great Missouri River, Bismarck residents have no shortage of outdoor recreation that spans all four seasons. This lively city always has something going on, but at the same time, you can take it slow here. Perhaps that’s why Bismarck is consistently named one of the country’s least stressful cities.

Tucked away in western North Dakota, Minot is a city chock-full of history, arts and culture. Like Bismarck, its fossil fuel industries are thriving, but other large industries include agriculture and logistics, and it has the largest distribution center between Chicago and Seattle. Jobs are plentiful here, and Minot’s unemployment rate is low.

The city’s infrastructure includes three major highways, two major railroads and the Minot International Airport, making getting around a breeze. This city is one of constant growth, drawing in new businesses and residents looking to take advantage of all it offers.

Home to the University of North Dakota, Grand Forks is a college town with lots of charm. This city of 59,000 people is perched on the border between Minnesota and North Dakota and offers residents enticing amenities like low crime, friendly people, plenty to do and abundant job opportunities. The city is a hub for industries like aerospace and engineering, and the Center for Aerospace Sciences at UND is one of the best in the country. For all those hockey fans, it’s also consistently dubbed the country’s best hockey town thanks to the amazing Ralph Englestad Arena, the UND Fighting Hawks and their energetic fan base. As a result, more and more young people and families are choosing to place roots in Grand Forks. Will you be next?

Chances are when you think of a North Dakota city, Fargo comes to mind — and for a good reason. Affordable living costs, a revitalized downtown, access to world-class health care and a thriving start-up scene are all reasons the city of Fargo was ranked #48 on our 2022 Top 100 Best Places to Live. Fargo’s designation as a friendly, hip city with great job opportunities continues to draw in new residents daily. The city also boasts an impressive art scene with ten art galleries and museums. Add amazing restaurants, craft breweries and coffee shops to the list, and you’ll see why Fargo is truly a Midwestern gem.

If you’re looking to put down roots somewhere with a more relaxed, small-town feel, Dickinson, North Dakota, is the place to be. The recent North Dakota oil boom has made this city of 25,000 one of the fastest-growing cities in the country. The presence of Dickinson State University brings livelihood into the downtown area, and there are plenty of restaurants, community events and even a local winery to keep you entertained. For history buffs, the Dickinson Museum Center & Badlands Dinosaur Museum is a fantastic place to learn about the area’s prehistoric past. Finally, perhaps Dickinson’s main claim to fame is its proximity to both Theodore Roosevelt National Park and the Little Missouri National Grassland, the largest grassland in the country.