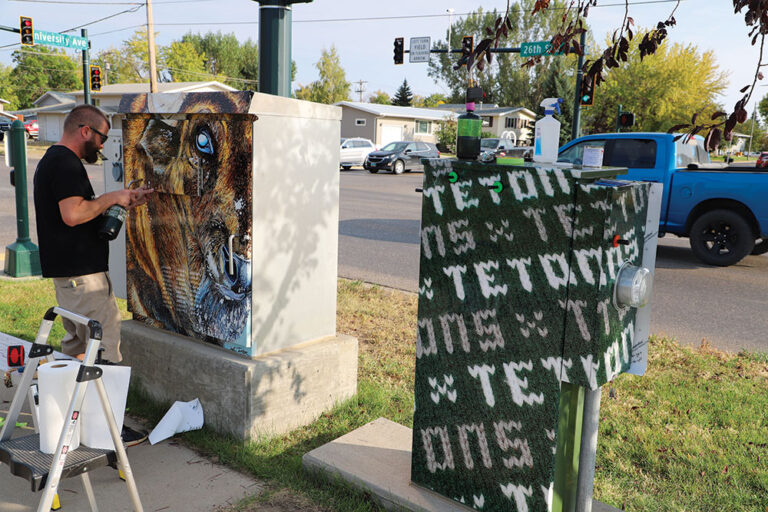 Williston is the economic, educational and health care hub for northwest North Dakota and northeast Montana. The region continuously focuses on innovation and technology, creating an ecosystem that attracts highly advanced businesses and flourishing startups and entrepreneurs.

Stop…and Check Out the Art

Art is on display throughout Williston, even on its traffic equipment.

As part of a beautification campaign, 14 traffic signal cabinets in Downtown Williston have been wrapped in vinyl and now feature high-resolution images of paintings and photography.

The initiative started as a Leadership Williston class project in 2017-2018, aiming to have more public art on display. This effort concentrated on transforming existing objects into colorful canvases around town. The initiative ended in 2020.

In addition to the canvases, art can be seen at n a number of venues throughout the area.

Warm-weather months offer concerts by the Williston State College City Band at Harmon Park. Plus, the Williston Downtowners Association hosts the Summer Nights on Main concert series, which is made up of nine concerts. Along with the music, the events include food vendors, drinks, activities for kids and more, making them fun for the entire family. For more information on the concert series, visit willistondowntown.com/summer-nights.

Williston is home to a number of top organizations that keep the region running smoothly, including the Williston Area Chamber of Commerce and the Williston Downtowners Association.

The chamber has served the area since 1907, representing, supporting and advocating for Williston businesses, organizations and residents. As the area has seen tremendous growth over the last decade, the chamber has also worked to make Williston a place people want to live, work and thrive.

The Williston Downtowners Association was launched in 2010 in an effort to bring life back to the Downtown area. In addition to keeping the area vibrant, the nonprofit promotes and supports Downtown businesses and events.

Known to locals as “The James,” the James Memorial Art Center is housed in what was once Williston’s first library, which opened in 1911. The building was added to the National Register of Historic Places in 1979.

The library closed in 1983, with the building sitting vacant for 10 years and earmarked for demolition until a group of citizens formed the James Memorial Preservation Society and saved the historic site, developing it into a center for the visual arts.

Today, the James is an art and cultural center that offers rotating art exhibits and art classes as well as hosts the annual ArtFest every September.