Once the largest producer of cotton cloth, Manchester Millyard now has a bustling biotech scene and is a hip hub for restaurants and bars 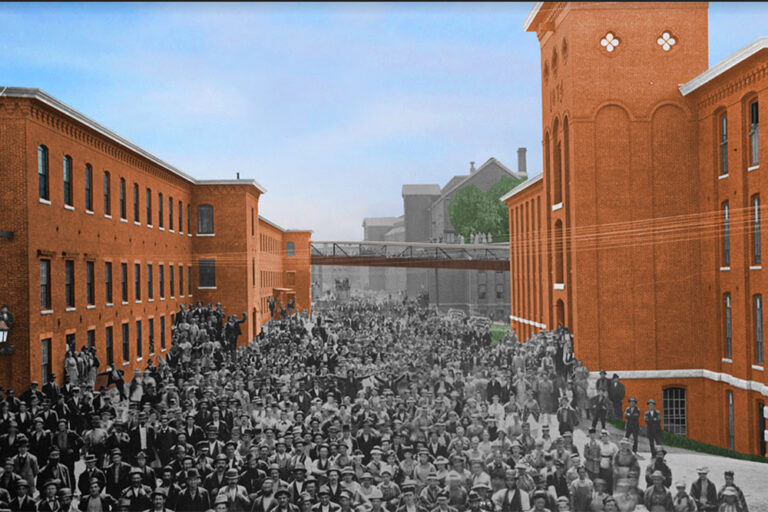 Illustration by Politico/Photo by The Manchester Historic Association

In the 18th and 19th centuries, Manchester, New Hampshire, was a titan in the textile industry. The Amoskeag Manufacturing Company’s Millyard resembled a colossal walled city, spanning the east and west banks of the Merrimack River for more than a mile.

At the height of production in 1910, the company employed more than 17,000 people, who collectively churned out a total of 5 million yards of cloth by the end of each six-day workweek. (To help paint a picture: If you were to stack up the finished products at the end of each day, it would equal 470 miles of cloth.)

As was typical for companies during the Industrial Revolution, though, Amoskeag had a rise-and-fall fate. It became the largest producer of cotton cloth in the world, supplying Levi Strauss with its denim and the fashion world with gingham dresses. Beyond clothing, the manufacturer’s prolific machine shop even produced locomotive engines for railroads in the U.S. and Canada. But a nine-month labor strike, compounded by aging machinery and the Great Depression, eventually proved too much for Amoskeag, which, on Christmas Eve in 1935, closed its doors and declared bankruptcy.

Now, decades later, Manchester Millyard is in the midst of a magical second act and is a district that’s thrumming with energy and an entrepreneurial spirit.

With about a dozen of its roughly 40 mill buildings still standing, the mill yard is the region’s hub of a growing biofabrication industry, hosting the highest concentration of jobs in New Hampshire and developing medical therapies from living cells, tissues and organs.

The goal of the biofabrication industry is to improve the standard of care for chronic diseases and traumatic injuries while significantly lowering the cost of healthcare, explains Jodie Nazaka, director of the Manchester Economic Development Office.

“From its modest beginnings, through its rise as one of the largest textile manufacturers, to today, the Manchester Millyard continues to be the economic driver of the Southern New Hampshire region,” Nazaka says. “As it did over 200 years ago, the millyard will continue to lead Manchester and the region forward as a destination for innovation, advancement and economic success.”

Restaurants, breweries, apartments, workspaces, fitness studios and a hotel are also a part of the millyard’s comeback, too. To bridge the past and present, the Manchester Historic Association’s Millyard Museum anchors the area and has a permanent exhibit where locals and visitors can see the stone tools of the Paleo-Indians who fished at Amoskeag Falls and learn how raw cotton was turned into cloth during the Industrial Revolution.

Here is a look at how the millyard is again playing a vital role in Manchester’s economy.

From Textiles to Biofabrication: The Evolution of the Manchester Millyard

More than 30 years ago, renowned inventor and entrepreneur Dean Kamen realized the potential for Manchester when he saw the historic Amoskeag Millyard. Kamen, the founder of DEKA Research and Development Corp., helped build a specialized ecosystem around the biofabrication industry. The catalyst for the ecosystem was the Advanced Regenerative Manufacturing Institute.

“Thanks to ARMI, the early concepts of biofabrication are rapidly becoming a reality,” says David Rogers, chief development officer at ARMI. “And so Manchester is becoming a world leader once again, developing technologies that could one day offer cures for many chronic diseases.”

Backed by a recently announced $44 million “Build Back Better” grant from the federal government, the millyard is positioned to become Southern New Hampshire’s hub for manufacturing cells, tissues and organs as life-saving therapies. Already in the millyard, ARMI’s BioFabUSA has created a tissue foundry as a prototype to manufacturing human tissues for clinical trials.

The millions of additional available square feet in the historic mill buildings played a crucial role in helping Manchester nab the competitive federal grant. The millyard can accommodate engineering and rapid prototyping resources, as well as incubators for early-stage companies, labs for research and development and space for supply chain partners and universities.

As an example, ProKidney — a biotechnology company with a cell therapy platform that can treat chronic kidney diseases using a patient’s own cells — is working with ARMI to scale up and automate its manufacturing and is looking to the millyard as an ideal place to establish its manufacturing lines and hire its workforce.

Eat, Play, Work: How The Millyard has Become a Community Treasure in Manchester

Beyond biotech, the once-shuttered millyard has also blossomed into a hip eat-play-work district in Manchester.

In a modern-industrial space, The Foundry Provisions and Spirits, for example, is a farm-to-table restaurant that serves dishes like award-winning poutine with cheddar cheese curds from a New England farm and a house-made gravy and also hosts popular Sunday riverside brunches. Over at craft beer bar Strange Brew Tavern, live music sets the soundtrack most nights. And, at Kama Fitness, the millyard’s high ceilings are perfect for hosting circus-style aerial silks classes.

Business lovers appreciate the uniqueness of the millyard spaces, where large windows look out at the Merrimack River, and wood floors are pocked with marks made by machines decades ago.

Originally, Priscilla Lane-Rondeau was planning a counter shop for her pizzeria. But when she walked into the millyard space where 900 Degrees Neapolitan Pizzeria is now housed, she knew it was just the right fit for her gourmet pies.

“I just love the atmosphere of the old building along with having woodfired pizza,” she says. “It combines what I want to provide for my guests — awesome food in a fun and beautiful atmosphere.”

The pizzeria, which kept its original beams and walls, was honored by the Manchester Historical Society for the interior work of the restaurant.

At Cotton, one of the older restaurants in downtown Manchester, chef and owner Jeff Paige created the feel of an old city supper club, with local producers showcased on the menu and a classic cocktail list featuring specialty martinis.

Paige previously worked as the chef and director of food service at the museum at Canterbury Shaker Village, a former Shaker settlement. When he opened Cotton in the millyard in 2000, he said he was drawn to the area because of its rich history.

“I love the spirit, feel and character of old buildings being repurposed into a new life,” Paige says.