From low-cost hydrogen to deep space exploration, this Southwestern state is a national leader in new energy technology. 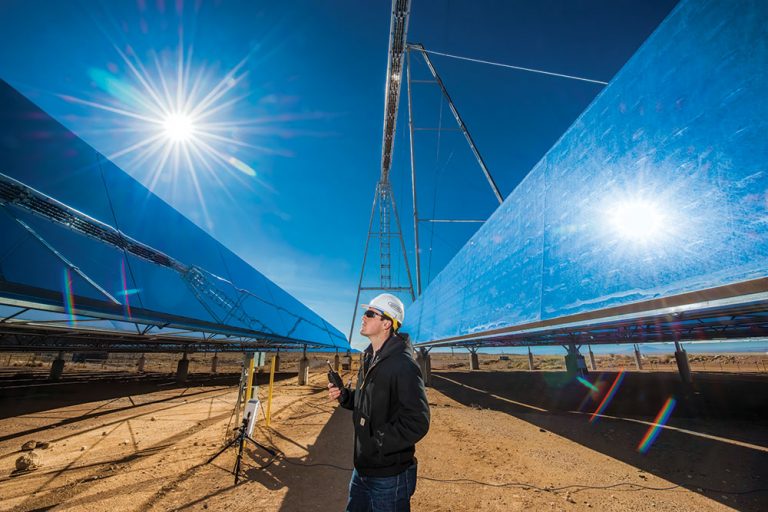 In 2019, New Mexico’s governor signed the Energy Transition Act into law, putting forth a bold challenge for the state: Become 100% carbon free by 2045.

While this may seem mighty ambitious, the Land of Enchantment has an innovation-led ecosystem consisting of national labs and private businesses that are pioneering clean energy solutions in New Mexico. This includes a unique partnership between Sandia National Laboratories and utility provider Public Service Company of New Mexico (PNM) to address energy challenges locally and nationally, plus private companies inventing new ways to produce solar, wind and geothermal energy.

On top of all that, the landscape of New Mexico allows for a diverse energy sector. It’s a notable juxtaposition: New Mexico is a major producer of oil and gas, but the state is also paving the way in new energy technologies.

New Mexico ranks sixth in the nation for the amount of power generated
by wind, solar and energy storage power plants.

“New Mexico is doing it through forward-looking collaboration between leading institutions in the energy ecosystem — national labs, universities, state and local governments, Native American tribes, the Department of Energy, the Department of Defense and private industry,” says Charles Hanley, Sandia National Laboratories senior manager for grid modernization and military energy programs. “We really are in a leadership position based on this diverse and experienced combination.”

A number of novel technologies focused on clean energy in New Mexico have the potential to propel a revolution not just in the state, but across the nation and even into outer space.

Sweeping energy legislation signed into law in early 2019 calls for New Mexico’s major electric utilities to get 100% of their power from carbon emission-free sources by 2045.

PNM, the state’s largest electricity provider, plans to do so by closing its San Juan Generating Station, transitioning away from coal and moving to wind and solar sources.

Sandia began working with PNM at the end of 2019 and is in the beginning stages of projects. “We are already starting to make some progress on tools needed to assess the roles of current and future energy storage technologies in an integrated, nearly statewide grid, with the goal of achieving a 100% clean electric system,” Hanley says.

By securing its reputation as a national leader in clean energy, the state can ultimately attract more businesses, leading to unprecedented economic opportunities to manufacture clean energy technologies. As an early example, California nuclear energy company Kairos Power plans to hire dozens of employees for an expansion at the Mesa del Sol development in southern Albuquerque.

New Mexico’s energy initiatives are far-reaching, so much so that scientists in the state have their eyes on space, and a startup company has cracked the code for low-cost, low-carbon hydrogen.

Kilopower is a small, lightweight fission power system that’s capable of providing various ranges of power from reactors to power everything from deep-space missions to a lunar or Martian habitat.

“If you think about it, New Mexico is the perfect state
to study and develop new energy.”

When it comes to developing ideas for new energy, you fundamentally need all forms of energy. New Mexico excels at this because the state has sunshine, wind, geothermal energy, oil and gas, and nuclear labs, Krishnamoorthy says.

In New Mexico, the sky’s no limit as state’s aerospace industry is writing the future of U.S. space exploration.