Hamilton is Home of Champions 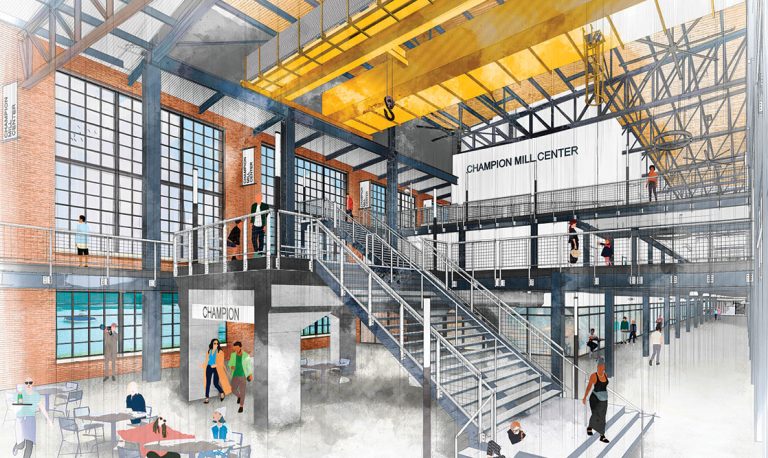 Something big is coming to Hamilton, and you might have already seen traces of its arrival. On the grounds of what was once the area’s Champion Paper Mill will soon stand the largest indoor sports complex in North America. While under construction now, it will generate positive economic waves throughout the region once completed, drawing thousands of people within a 300-mile radius.

This $144 million Spooky Nook Champion Mill facility is expected to open in 2021, hosting sporting events, such as basketball and volleyball tournaments, with space for as many as 500 teams and 10,000 athletes. It will also include indoor/outdoor soccer fields and 30 indoor courts.

Along with the sports complex, plans are in place to build the second-largest convention center in the Greater Cincinnati region, which will feature a hotel, retail shops and restaurants. The two facilities will total over 1.2 million square feet.

To say the project is transformational is an understatement, says Dan Bates, president and CEO of the Greater Hamilton Chamber of Commerce.

“It’s easy to get excited about this project,â€ he says. “The synergy between the sports complex and the convention center will be significant. As a whole, Spooky Nook is going to have ample flexible space. There’s nothing we can’t handle once that’s fully up and in operation.”

The area is expected to reap an economic impact of $98.8 million, and over 1 million visitors are expected to use the complex within the first year.

Spooky Nook Sports owner Sam Beiler says his company was introduced to the city by the demolition contractor at Champion Paper Mill, which closed in 2012. The property was enticing, but he was impressed by the community.

“Our confidence in Hamilton grew as the commitment to this project by city government, the council members and the mayor became obvious,â€ Beiler says.

He praises Hamilton City Manager Joshua Smith’s “tremendous vision and confidence in the cityâ€ as instrumental in bringing the project to fruition.

Downtown on the Rebound

“With this as the basis of our introduction to Hamilton, we studied the underlying demographics and realized the region was primed for a project like Spooky Nook Sports and the associated convention and event center.”

“One of our strengths here is that leadership is on the same page,â€ he says. “From the chamber to the business community to elected leadership and the city manager, the community speaks with one voice when it comes to support for this project. We all want the same thing – for Hamilton to be hugely successful. Everyone is on board to make that happen.”

Spooky Nook By the Numbers

Athletes and their families expected to attend on tournament weekends

Full-time staff expected to be employed

Part-time staff expected to be employed ,,,,,,,