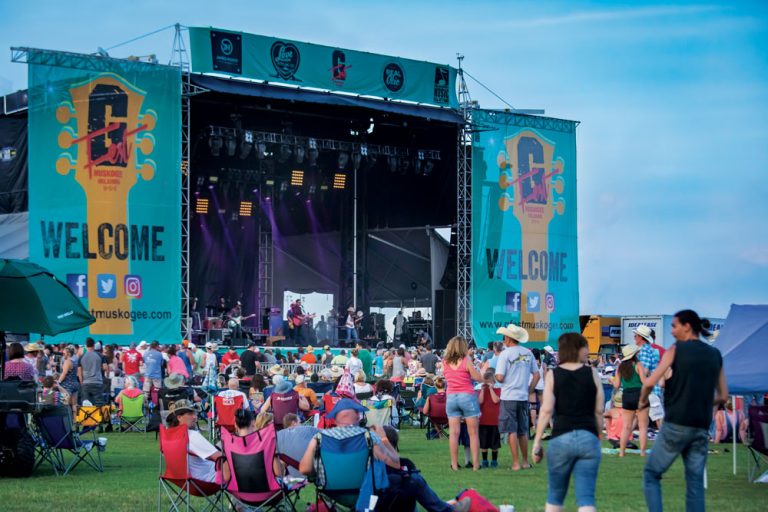 Home to the Oklahoma Music Hall of Fame, Muskogee has a rich musical history that is celebrated annually at G Fest, a three-day music festival established in 2016.

The event, created by OMHOF board and staff members, took place in June at Muskogee’s Hatbox Field and featured approximately 85 acts on four stages.

“There’s never been a bigger music event in Muskogee,” says Jim Blair, who serves as G Fest’s coordinator and is the executive director for the OMHOF. “We have an impressive, diverse line-up of artists, and it’s something the whole community can enjoy.”

Discover More Things to Do in Muskogee, OK

According to Sue Harris, G Fest’s volunteer coordinator, the festival is largely managed and organized by volunteers.

“It takes hundreds of workers to plan and staff an event of this size, and it takes a lot of volunteers,” Harris says. “The volunteers include city officials, parks and recreation employees, emergency management, the Chamber of Commerce and Tourism, and many others who work all year to prepare for the event.”

The planning and production of the festival’s first year was captured in The Making of G Fest, a documentary directed by Oscar Ray of Muskogee-based Bare Bones FilmWorks.

The 60-minute film, which debuted in March 2017 at the Muskogee Little Theatre, was designed to be both entertaining and educational.

“Since it was the inaugural event, I thought it was important to document it and show what it took to put it on,” Ray says. “It’s not a one-hour infomercial for G Fest; instead, it provides background information on Muskogee and its music history, as well as the history behind Hatbox Field. It also explains what makes Muskogee unique and highlights the city’s musical contributions across all genres.”