Skip to content
Home > OR > Ashland0 > Where to Live Now > Why Ashland, OR is One of the Best Places to Live in America

Why Ashland, OR is One of the Best Places to Live in America

Arts, education and adventure give Ashland an edge 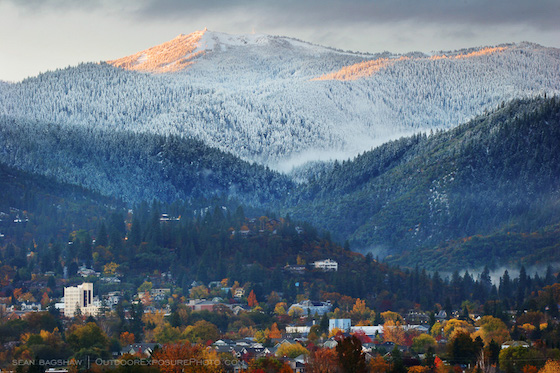 Situated at the southernmost tip of Oregon’s scenic Rogue Valley, and just 15 miles from the California state line, Ashland offers a culturally sophisticated yet friendly small-town vibe. And with 300 days of sunshine each year, the city is an ideal choice for anyone looking to settle in a mild climate for four distinct seasons.

A naturally stunning geographic location and a rich heritage of art, theater and music ensure that you’ll never run out of things to do in Ashland. The city’s population of roughly 20,000 enjoys the perks of not only being in a college town, thanks to Southern Oregon University, but also in a well-loved tourist destination.

“That duality encourages some pretty sophisticated amenities that residents are able to take advantage of,” says Katharine Cato, director or Marketing at the Ashland Chamber’s Visitor and Convention Bureau. “The quality of life here threads throughout so many aspects of the city—art, music, theater, dining. We have more than 100 local restaurants, which is highly unusual for a city our size.”

Perhaps the city’s most celebrated cultural offering is the Oregon Shakespeare Festival (OSF), widely acknowledged as one of the country’s best theater companies, known for its elaborate productions—not only the Bard’s—but of works from dozens of notable playwrights.

And theater is only the beginning of the artistic landscape in Ashland—the perfect home for anyone looking to put down roots in a place where live music, independent films, eclectic festivals and a thriving artisan community are valued.

5 Bucket List Things You HAVE to Do in Ashland

“We have a well-developed network of parks and opens spaces throughout the city,” Cato says, of the city’s 785 acres of parkland and 41 miles of trails. “You can get virtually anywhere you need to go by walking or biking.”

Healthy place to raise a family

Ashland’s focus on parks, no doubt, contributes to the city’s overall health and wellness, with 84 percent of its adult residents indicating that their leisure time includes physical activity. As a destination for trail-running, skiing, hiking and mountain biking, Ashland locals have year-round access to the types of outdoor pursuits that require travel for most U.S. residents.

And while Ashland is a great fit for an outdoorsy and culturally engaged population, it’s also a smart choice for families with school-age members. The city’s public schools consistently score above the national average on state and national assessments, while Ashland High School has repeatedly earned the silver-medal designation from US News and World Report, which ranked it as one of the country’s top-10 percent high schools.

Ashland’s surrounding natural beauty and the creative core of its downtown corridor offer the ideal mix of peace and progress, permeating the city’s quality of life. For anyone in search of either, both are only a few steps away.