Seven miles and 20 years away from downtown Portland, St. Johns is a hidden gem for locals and visitors alike. 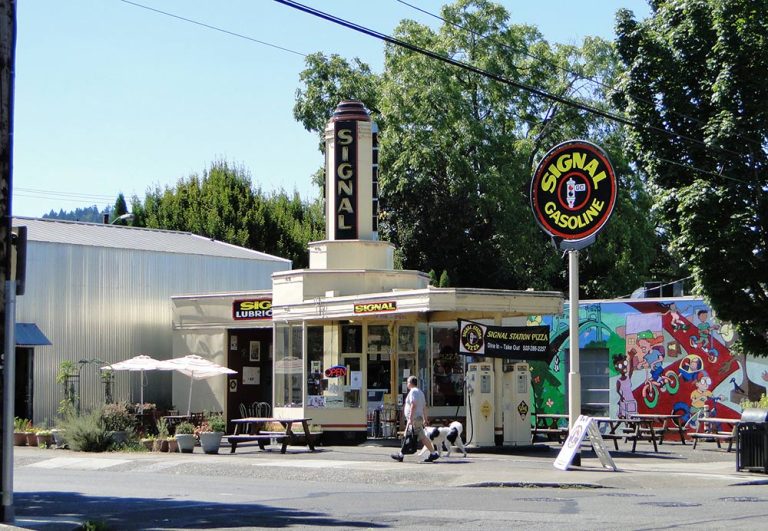 Portland, as any resident will tell you, is changing. In recent years, the proudly weird city has experienced a population boom and high-tech transformation that has made the phrase “new Portland” a frequent reference in conversations between locals.

Fortunately, vestiges of Portland’s cultural potpourri of a past still remain, the most notable of which is the city’s northernmost neighborhood: St. Johns.

Located about seven miles north of downtown Portland, St. Johns is a diverse collection of specialty shops, offbeat bars and restaurants, and small homes surrounding its own tiny “downtown” that seems as if it were air-lifted intact from the 1950s. Once its own township, over a century ago St. Johns began a very slow consolidation with Portland, but it has retained a small-town feel to the point that an afternoon spent here feels like a break from big city life.

Courtesy of Noël under a CC 2.0 license.

The most dominant feature of St. Johns is, of course, the St. Johns bridge, a Gothic marvel that soars above the Willamette River. For many folks, visiting the St. Johns Bridge (either for a photo opportunity or simply to cross the river) is their only interaction with the neighborhood, but once you cross the bridge into St. Johns, there are many reasons to stop and stay a while.

Courtesy of Ted under a CC 2.0 license.

As many independent specialty businesses have disappeared from Portland’s urban landscape, St. Johns has retained a surprising number of local shops focusing on the sort of specialty needs that have disappeared from many small towns. Wandering through the heart of the neighborhood, you’ll find Blue Moon Camera and Machine; Fencing School Salle Trois; The Man’s Shop, which has been selling retail men’s wear since 1940; and Pattie’s Home Plate Café, a combination 1950s style restaurant and gift shop that feels like St. Johns’ attic: a collection of everything left over from the past that still works just fine.

Courtesy of Beth H under a CC 2.0 license

In addition to the small-town feel of St. Johns’ commerce, the neighborhood has a thriving mid-century bar and restaurant scene. Long known for its quirky holes-in-the wall, recently the area has experienced a bit of a food and cocktail boom.

The famous Wishing Well Restaurant is a Chinese restaurant also known for perhaps having the stiffest drinks still to be found in the city. On the edges of St. Johns proper you’ll find The Fixin’ To, a sort of urban dive with Southern snacks, and Leisure Public House, a sleek lounge; while a variety of locals’ haunts, such as Marie’s and Slim’s, fill the village center with fantastic people, cold beer and tall drinks.

Surrounding St. Johns’ downtown are clusters of slowly changing, but still remarkably affordable (for Portland) housing. From brand new condos and apartments to the swaths of single family houses, to the ’70s and ’80s apartment buildings sprouting from the hillside leading down to the Willamette River, St. Johns’ small town feel derives from being one of the last affordable bastions within a larger city where housing prices are skyrocketing.

The comparative isolation of St. Johns contributes to another small town tendency: people who live here tend to hang out with other people who live in the neighborhood. A night out in St. Johns is a one-of-a-kind Portland experience in that nearly everyone you meet is a local.

Courtesy of Amy Meredith under a CC 2.0 license.

Similarly, new arrivals to the area are quickly turned into locals, not only because of the thirty minute drive to reach nearly any other part of the city, but because the culture of St. Johns is both tight-knit and welcoming.

Whether you live in Portland or are planning a visit, a detour to St. Johns is an experience in time travel — a pristine little late 20th century collection of excellent bars, unique shops, stores, and restaurants and affordable housing that awards a wanderer in search of small-town America a little glimpse into the past, even as its eye may be on the future.