How Pennsylvania Became a Manufacturing Marvel

A legacy in manufacturing forges a diverse and technologically driven industry sector. 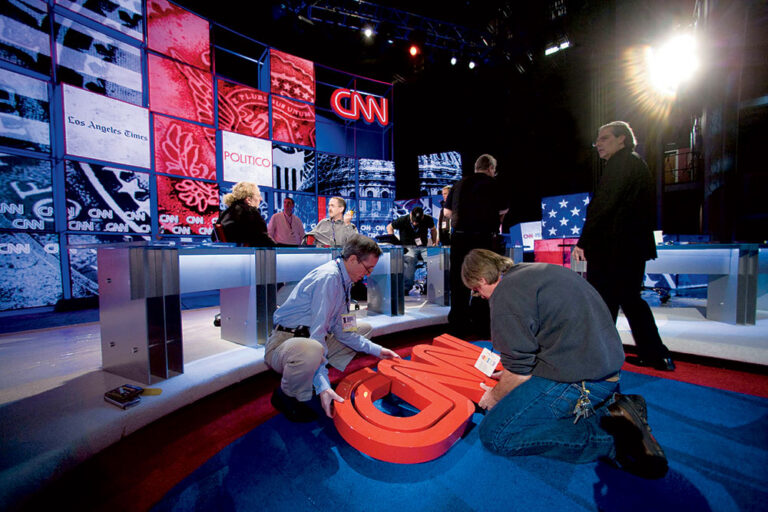 When you watch CNN or other T.V. news networks or turn the key to start a vehicle of any size, from the mightiest train, truck or farm tractor to the smallest golf cart, you are probably experiencing the handiwork of advanced manufacturers based in Pennsylvania.>

The state’s technologically driven manufacturers are part of a thriving sector that includes nearly 19,000 operations employing more than 575,000 workers who produce everything from vehicle batteries and motorcycles to headgear, food products, glassware and crayons.

“As a creative small business, I couldn’t think of a better place to be.”

“We build the scenery. Watch Anderson Cooper (on CNN). That’s an example of our work. We did a lot of work for the “Today” show for NBC,” says David Boyce, who launched the custom contract furniture and fabrication company in 1987.

Another advanced manufacturer, East Penn Manufacturing, operates one of the world’s largest single-site lead-acid battery and accessory manufacturing facilities. The family-owned company, based in Lyon Station, is known for its commitment to environmental sustainability.

East Penn was the first in the industry to launch a facility dedicated to reclaiming battery acid. Today that facility recycles more than 7.6 million pounds of acid annually. In addition, the company recycles every drop of its 47.6 million gallons of industrial wastewater annually.

Vehicles of all sizes and shapes, even mobility scooters and floor care equipment, are powered by East Penn’s Deka and other battery brands.

“Members of the surrounding communities aligned well with those positive attributes and they joined together to build a genuine American entrepreneurial success story,” Snyder says.

Today, East Penn is the largest employer in Berks County. Its location is one of the keys to its long success.

“Over the years, East Penn continued to draw human resources from this industrious area and the growth of the company continued to flourish. The region’s strong base of manufacturers, technical trades and schools, hardworking farmers and other professions helped continue to solidify a workforce that would earn recognition on a global basis,” Snyder says.

A Wealth of Resources

Pennsylvania’s manufacturers benefit from relatively low energy costs, a major advantage in energy-intensive industries. Add to that developed infrastructure that includes an integrated network of interstate highways, 64 railroads and ports with access to the Great Lakes, Gulf of Mexico and the Atlantic Ocean.

Those advantages are attracting new investment. Ball Corp. is investing $360 million in an aluminum beverage packaging plant in Luzerne County. Poland-based CANPACK Group is redeveloping a former brownfield site in Lackawanna County into an aluminum can manufacturing facility and North American Center of Excellence.

High Tech in a Rural Setting

Boyce Products is also thriving because of its location in Pennsylvania’s Pocono Mountains and the work ethic of its employees.

“We are a fun story as well being a high-tech manufacturer doing world-renowned work from a small farm community,” Boyce says.

The company has 46 employees, at least half of whom have been with it for 10 years or more.

The area is “a very rural community with a great work ethic. Our older generation and young workers complement one another’s skillsets,” Boyce says.

“Bookcases that pivot to secret rooms. Hidden doors in walls. Speakers that come out of floors. James Bond kind of stuff,” Boyce says.

It does all of this in 60,000 square feet of high-tech space that fits in with its rural setting.

The headquarters “looks more like a horse riding facility than a manufacturing center,” Boyce says. “But we’re on the cutting edge.”

The food industry serves you right in Pennsylvania, with many companies experiencing success.

Among the most famous is Pittsburgh-based Kraft Heinz Co., the world’s fifth-largest food and beverage company. Heinz ketchup, Oscar Mayer hot dogs, Kraft macaroni and cheese, Planters nuts, Jello desserts and Classico sauces are among its stable of brands.

Hershey is one of the world’s largest producers of chocolate products. Hershey’s, Reese’s and Twizzlers are among its brands. The company, which has operations worldwide, maintains its corporate offices and two manufacturing plants in Hershey and has a manufacturing operation in Lancaster. Bassetts Ice Cream in Philadelphia is a fifth-generation family business billed as America’s oldest ice cream company.

In Bethlehem, another candy maker, Just Born, makes the signature Peeps marshmallow products shaped like chicks, bunnies and other animals. The company also makes Hot Tamales and Mike and Ike.

Musselman’s has made apple sauce, apple butter and apple juice in Gardners since 1907. The unincorporated community of Landenberg in southern Chester County is known as the mushroom capital of the world and home to Buona Foods, which grows and processes more than 3 million pounds of mushrooms a year.