How much does it cost to live in Pittsburgh? From rent to lattes to transportation, we asked a local to tell us EVERYTHING. 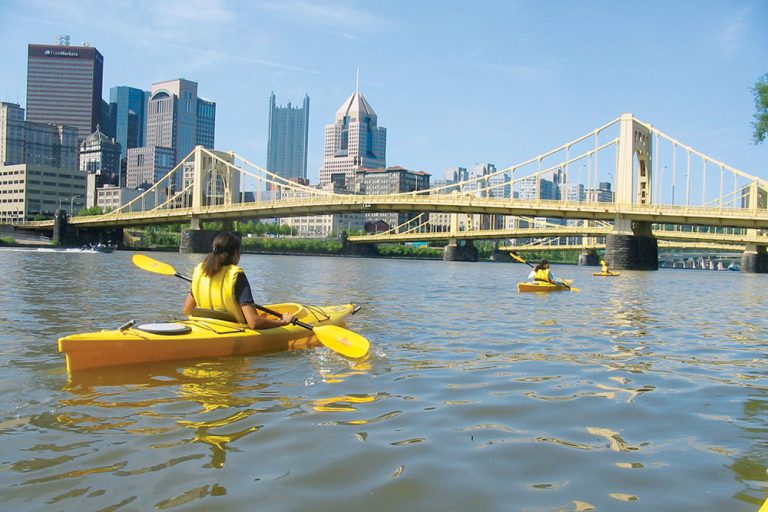 Pittsburgh is consistently one of the most popular cities featured on Livability. A beautiful, welcoming, rapidly growing city with a thriving tech scene that was recently named one of our Top 100 Best Places to Live in America, there are tons of reasons why so many people want to know more about living in Pittsburgh. So, how much does it really cost to live there? We asked a local to give us the scoop on everything from rent to lattes to childcare.

How long have you lived in Pittsburgh?

What’s your rent/mortgage in Pittsburgh?

I pay $1250 + utilities for a two bedroom, 1.5 bath single family home in Pittsburgh’s Greenfield neighborhood. It’s pet-friendly (I have a dog!), has a backyard and off-street parking. I’d say my rent is pretty average, if not slightly low. I rent from a private landlord which always tends to be slightly lower than a property company in Pittsburgh.

Greenfield as a whole is slightly more affordable than some of the other neighborhoods because it isn’t as walkable. I can walk to a bar and cafe but not much else in under 30 minutes. Greenfield has excellent access to one of our best city parks for hiking, and has great bus access.

Why I Love My City: Kelly Beall on Pittsburgh

Pittsburghers typically own cars, and it’s easy to get anywhere in the city from here – my commute downtown for work is about 11 minutes on average. I have friends who live in the suburbs and pay $1400+ for smaller, single-family homes, and those who live in the city and pay $750 for a one bedroom in an older building or $2000 for a one bedroom in a newer luxury building.

There’s a wide range of properties here and you can typically find something in your budget no matter what. I am planning to purchase a home soon, but unfortunately prices in my desired neighborhoods are rising. It’s completely reasonable to find a home in some Pittsburgh neighborhoods for $100,000 or less, but it will definitely need some work. The average home price is about $150,000.

Who are the main employers in Pittsburgh? Are jobs relatively easy to find?

Major industries in Pittsburgh are healthcare, insurance, banking, tech and higher education. I work in higher education and my boyfriend works in insurance. Jobs are typically well-paid for the area, but of course that varies employer to employer.

Pittsburgh has a relatively low cost of living. I know people who took pay cuts to move here from cities like New York and DC and ended up making more in the long run. We have cool tech firms like Google, Uber, Duolingo, etc.

How’s the access to grocery stores and food in Pittsburgh? Are you going to be able to find things like quinoa and gluten-free pizzas at your local grocery store?

Grocery store access is fine in most neighborhoods. Since most people have cars and Pittsburgh is a fairly small, compact city, it’s easy to drive to your desired store. We have co-ops, Whole Foods, natural food markets, specialty food stores, Trader Joe’s and normal chains.

There are a few food deserts in our more poverty-stricken neighborhoods. It’s easy to find specialty items at almost all chain stores. Also tons of restaurants cater to special diets like vegan, etc.

What’s it like to be a childfree adult in Pittsburgh?

I do not have kids nor am I planning to. There is tons to do here. Pittsburgh is actually very cultural when it comes to things like art, museums, and theatre. I go to a lot of plays and musicals, as well as concerts from our Grammy-winning symphony orchestra and choirs.

I feel like there’s something for everyone, and some of my favorites are breweries, new restaurants, museums and festivals.

How walkable is Pittsburgh? Is there a good public transit system?

I don’t personally use public transportation, but my boyfriend has never had a car in the seven years he has lived here and has gotten around just fine. He says, “It’s not the best” – he’s from New York – “and the quality of it varies depending on where you want to go.” There are buses that go most places and a subway system that goes mostly south of the city.

Pittsburgh is fairly diverse, but there is still a lot of segregation. Out of all of these, I’d say that religion is probably the most integrated. There are a ton of different religions here, and most of the time they are all treated with respect. There are obvious exceptions here (the Tree of Life shooting).

Ethnically, politically and economically the city is still very segregated. The city is left-leaning politically, but nearly all suburbs and nearby surrounding areas are very conservative. There is also a lot of gentrification, which I think many cities deal with.

I typically order a soy latte and that will run me anywhere from $4 to $6. A cocktail at a fancy restaurant will not be more than $14, typically more like $11. My boyfriend and I eat out regularly at mid- to upper-mid-range restaurants and typically spend $100 plus tip on an appetizer, two entrees, at least one cocktail each and dessert.

Street parking is available in most neighborhoods, but if you have to park in a garage you likely won’t pay more than $5 to $10.

What are your absolute favorite things about Pittsburgh?

I love how much the residents care about this city. There is still a lot of improvement to do here when it comes to diversity and environmental issues – as any old steel town would have. There are so many organizations working hard every day and engaging their communities.

I love the small business atmosphere – small businesses thrive here because they have so much support. The restaurants are amazing and there’s always something new to try. There’s also a surprising amount of culture for a city of this size – especially things that are recognized nationally and internationally (like our symphony as mentioned earlier).

Pittsburgh is also just a really unique place! We have more bridges than any city in the world other than Venice, we are home to some incredible universities (Carnegie Mellon theater kids put on the best performances), and we are minutes from the wilderness if you want to go hiking or camping but still have so many big city amenities.

Most cities have a ‘catch’ – San Francisco has an insane cost of living, LA has terrible traffic, NYC has garbage bags lining the sidewalk. What’s the ‘catch’ with Pittsburgh?

There are a few: Pittsburgh is located in the middle of nowhere. It’s a trek to get to DC, New York or any other major city. There’s usually no easy way to get there – we don’t have a great train system like you would find between Boston and New York or New York and Philadelphia.

There is also a lot of work to do when it comes to racial diversity. If you are very liberal, when you leave the city you will feel like you’re in a different world with the Trump stickers and signs. I have only ever seen one Trump yard sign in the city limits and it was jarring because it was so rare.

I also appreciate the work that the city leaders are doing to try to grow the city – Amazon bid, tax incentives for tv and movies to be filmed here. I do, however, feel as if the infrastructure (public transit, roads and bridges, etc.) cannot support the growth they are striving for without some work.