“I could live in another city and make a future for myself, but I feel like I get to make the future in Pittsburgh.” 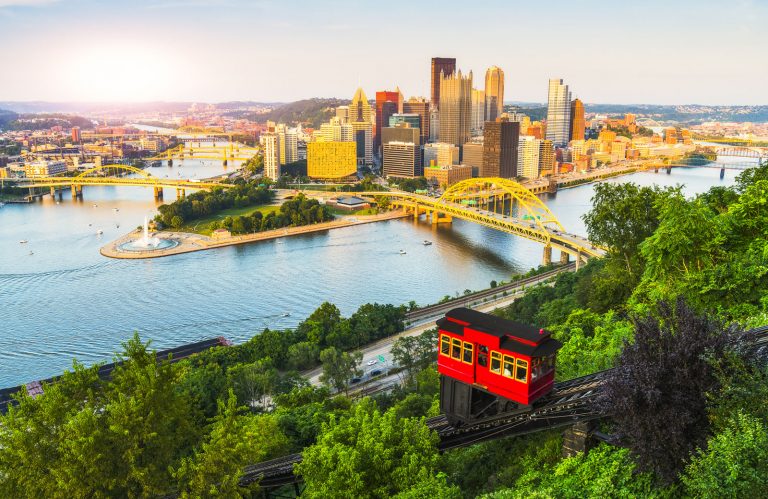 When Delvina Morrow first moved to Pittsburgh six years ago, she wasn’t sure what to expect. But the city quickly swept her off her feet.

For starters, Morrow and her husband were able to purchase a home, something that wasn’t possible in New York City, where she was born and raised. Her new South Side neighborhood is walkable and close to shopping, restaurants and green space.

She was impressed by how many people in Pittsburgh went out of their way to welcome and support her as she began looking for a job in her new city; Morrow found it easy to get involved with the community and began joining young professional groups and nonprofit boards.

“Pittsburgh really has everything that I needed as a young professional and as a young adult looking to explore, play and learn in a new city,” she says.

Today, Morrow is even more enmeshed in the fabric of Pittsburgh. She works for one of the city’s beloved sports teams, the Pittsburgh Penguins, as director of strategic and community initiatives. In her role, she works on the team’s social responsibility programs and serves as a liaison with various community organizations. She’s also supporting a project to redevelop the team’s former Hill District arena.

Morrow is just one of the many young professionals, families, entrepreneurs and change-makers who love calling Pittsburgh home. And it’s easy to understand why. The city is on the cutting edge in fields like artificial intelligence, cybersecurity, energy, life science and health, manufacturing and robotics. It’s full of innovators and makers, all working to solve some of the world’s toughest problems, and purpose-driven residents who are on a mission to make the world a better place.

Pittsburgh itself is also full of natural beauty – there are 15,000 acres of public parks and green spaces in the city’s urban core and more than 13 state parks in the surrounding region – and has its sights set squarely on a sustainable future. Pittsburgh International Airport, for example, is pioneering a new microgrid field with eight acres of solar panels and the airport’s own natural gas.

You’ll also find world-class architecture in more than 90 unique neighborhoods, each with its distinctive character and charm. Residents here unwind by biking along the region’s 400 miles of trails, wandering through the lush botanic gardens and basking in the glow of the city’s stunning fall foliage, just to name a few activities.

The city is a huge player in the arts, with more than 32 museums, 30 concert venues and 19 public libraries gifted by steel magnate and philanthropist Andrew Carnegie. Pittsburgh also has a robust nonprofit and philanthropy scene, bolstered by generous residents and their donations.

Plus, you’ll actually be able to enjoy all that Pittsburgh has to offer, thanks to the city’s low cost of living and doing business. The median price for a single-family home is more than 40 percent less than the national average, and the average office lease rate per square foot is just $23.51, which is a fraction of the price of other major cities.

And if you’re planning to launch a business here, you’ll be able to take advantage of the region’s deep talent pool, which includes 44,000 graduates from 88 colleges and universities, plus more than 234,000 students working toward graduation.

The region’s 34 colleges and universities are helping to drive innovation in other ways, too. Faculty and staff at Carnegie Mellon University, for example, founded Near Earth Autonomy, a company specializing in aerial autonomy systems, aka self-driving drones, helicopters and airplanes. Since its founding in 2012, Near Earth Autonomy has expanded to more than 90 employees.

Sure, the growing company could pack up and move to Silicon Valley, but why would it? Pittsburgh has everything the company needs and more – a world-class talent pool, low cost of living, great infrastructure, easy accessibility to other parts of the country and the world and a vibrant and growing tech scene (Uber, Google, Facebook, Microsoft, Apple and Amazon all have offices here). DuoLingo, another spinoff from CMU, highlighted the city’s amenities in a 2018 campaign to attract tech workers from California: the company put up a billboard in Silicon Valley that read, “Own a home. Work in tech. Move to Pittsburgh.”

“Between all the different universities here, we’re world leaders in artificial intelligence, robotics, medicine and other fields,â€ says Barry Rabkin, a spokesman for the Near Earth Autonomy. “These are industries that are transforming the whole world. I could live in another city and make a future for myself, but I feel like I get to make the future in Pittsburgh. I have the opportunity to participate in high-impact innovation that’s going to change the world for the better for decades to come.”