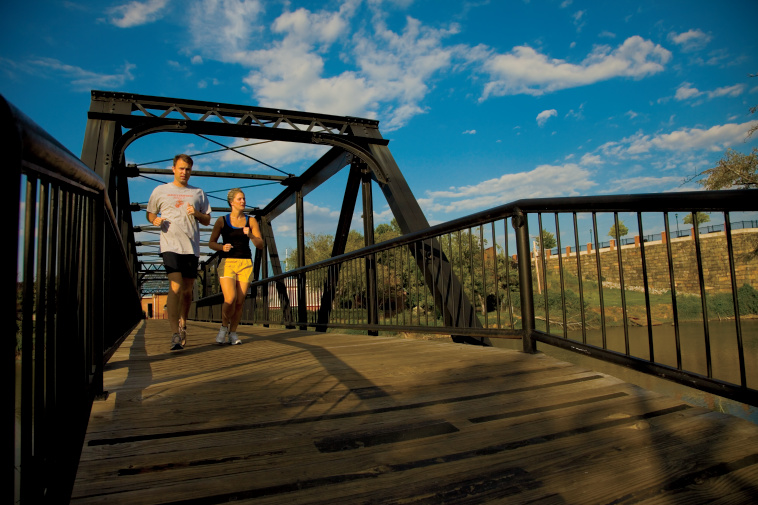 Change is in the air in South Carolina – and it’s all positive. Thanks to recent revitalization and improvement efforts, many of the state’s downtowns are seeing an influx of new development, and fresh outdoor destinations are appealing to a brand new crowd.

The things that don’t change, like the region’s mild climate and easy access to the Atlantic Ocean, standout beaches and abundant golf, also contribute to South Carolina’s appeal.

Many of South Carolina’s downtowns are debuting the results of significant revitalization efforts, drawing residents and tourists to shops, restaurants and special events.

Downtown Columbia’s transformation started in May 2011, when Mast General Store opened at Main and Taylor streets. Since then, the area has continued to attract new businesses and is now a thriving entertainment and shopping destination.

One of downtown Columbia’s major draws is the Soda City Market, a year-round street fair that takes place every Saturday on Main Street. Operating since October 2012, the market features 50 to 100 vendors selling farm-fresh food, pastries and baked goods, as well as handmade crafts and other items.

Emile DeFelice, the market’s founder, says approximately 2,000 people visit the market every weekend. Soda City Market has been so successful that DeFelice has opened Nest, a brick-and-mortar store offering items from regular market vendors. Open daily, the shop is also on Main Street.

“I can’t say enough good things about working on Main Street,” DeFelice says. “It’s a fantastic collection of people moving in the same direction, financially motivated to collectively create something great for the city.”

Covering more than 1,000 acres along the Catawba River, Rock Hill’s Riverwalk – a master planned community with homes, offices, shops and restaurants – is making it easy for residents and visitors to get active, especially when it comes to cycling. The development features the Rock Hill Outdoor Center, a collection of public recreation amenities that will eventually span 250 acres. In addition to trails, a kayak and canoe launch, parks and green spaces, the RHOC is home to the Giordana Velodrome, a track cycling facility that is endorsed by USA Cycling and hosts national competitions.

The RHOC’s newest addition is the Novant Health BMX Supercross Track, which is the only Olympic-caliber training facility on the East Coast and is expected to add about $4 million to the local sports tourism industry. In the works are Cyclocross trails, a mix of paved and off-road trails that will feature obstacles and steep inclines, as well as a closed road course for recreational and competitive cycling.

South Carolina’s more than 400 golf courses also contribute to the state’s outdoor recreation scene. Located near Charleston, the Ocean Course at Kiawah Island scored the No. 21 spot on Golf Digest’s 2013-14 ranking of America’s 100 Greatest Golf Courses. The course hosted the 2007 Senior PGA and the 2012 PGA Championships, among other major tournaments. Also ranked by Golf Digest is Harbour Town Golf Links on Hilton Head Island’s Sea Pines Resort, which has hosted the PGA Tour’s RBC Heritage tournament for more than 45 years.

In addition to top-rated golf courses, the state’s Coastal Zone offers easy access to water activities like sailing, swimming and surfing. The region covers approximately 1.2 million acres and includes Myrtle Beach, the No. 1 city on TripAdvisor’s list of Top 10 Summer Vacation Destinations for 2014.