These 7 beaches will be everything you've ever wanted in a seaside vacation. 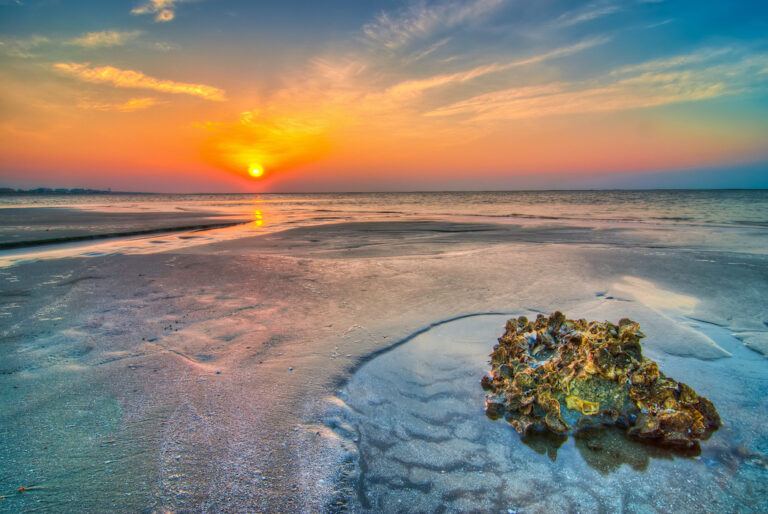 A beach vacation is supposed to be all about peace and quiet. But make the wrong choice of destination, and you’re likely to find yourself square in the middle of a Spring Break extravaganza. Thus, if you’re looking for a vacation that’s less party and more peace and quiet, these seven South Carolina beaches are going to be right up your sandy alley.

Located about 17 miles from Charleston, this barrier island lies along a narrow strip of land which is separated from the mainland by an Intracoastal Waterway. Originally named Hunting and Long Island, it’s thought to be at least 25,000 years old, first inhabited by the Sewee Indians. Legend has it that the only other occupants of the island were pirates who buried treasure in the deserted sand dunes, though none has been found (yet). It serves as both a vacation spot and home for year-round residents. The beach offers more than 50 access paths and allows pets, which makes it a great place for families. Today the island has a turtle rescue team along the coast, making it safe for all creatures who inhabit it.

These South Carolina cities offer affordable living to even the most budget conscious of residents.

This beach is a perfect getaway for those who enjoy a less crowded destination, yet still enjoy the attractions located near Myrtle Beach. The city offers a variety of oceanfront views along the southern coast, a hidden adventure for those worth going slightly off the touristy reservation. During your stay, you can enjoy fishing and crabbing off the new 1,250-foot long creek walk or watch the sunset at the Gulfstream Café. During the cooler months, stay warm with the favorite winter pastime of locals: oyster roasts.

The Best Socially Distanced Travel Destination in Every State

From secret beaches to drive-through safaris, check out this list of our favorite destinations in every state — no plane rides or crowds required.

As a site of a very violent battle in 1715 during the Yemassee War, the southernmost tip of Daufuskie ran red with blood, earning its name. This area became known for the ability to produce a rare kind of cotton, known as Sea Island Cotton. The idyllic Daufuskie Island is located between Hilton Head Island, South Carolina and Savannah, Georgia and is only accessible by boat. It is known for the best beaches, privacy, and accommodations. Visiting there is part history lesson, and all peaceful.

Beautiful beaches, southern hospitality, and great golfing are waiting on this luxurious island. It’s a top-rated destination for romantic weddings, intimate getaways, and family vacations alike. The island also offers over 3.5 miles of uncrowded beaches, tennis courts, tons of kayaking opportunities, and a seaside waterpark for little ones that features a kiddie pool with a giant frog fountain and alligator slides. Although vehicles are allowed on the island, expect to see a lot of the preferred methods of local transportation: bikes and golf carts, which add to the beach’s peaceful vibe.

Known as Charleston’s beach town, Folly is one of America’s last quintessentially Americana beach havens. It’s is a 12-square-mile barrier island packed with tons of things to do, see, and eat. At the edge of America surrounded by the Atlantic Ocean and Folly River, visitors can enjoy six miles of wide beaches perfect for surfing, fishing, biking, eco-tours, or spotting several endangered species of sea-wildlife. Downtown Folly also is packed with locally owned shops and businesses like bohemian clothing shops, knick-knacks, casual cafes, and one-of-a kind bars.

Known for the more adventurous side of South Carolina, this small coastal preserve offers a getaway for vacationers looking to explore wildlife and a secluded sandy beach. More than 300 species of birds have been recorded at the park, making it a popular place for visitors working on their bird-spotting checklist. A wide variety of land-based wildlife inhabits the island too, and you might even spot pelicans, spoonbills, alligators, sea turtles, and minks crawling around the sand. The park also offers camping sites and a wildlife education center.

There’s truly something for everyone in the Palmetto State.

This island just off the coast from Charleston is a golfer’s paradise, and for a good a reason: it’s quiet. If you’re like a golfer, demanding quiet while you work your beach magic, Kiawah Island has what you’re looking for. It’s exclusive, with five of the state’s best golf courses all on the island, but that means its beaches are also some of the quietest—so your stretch of sand is likely to have a low umbrella-per-square mile ratio. This is a good thing.