Boston has become one of the most expensive places to live in the country. Want the perks with a lower price tag? Check out these cities. 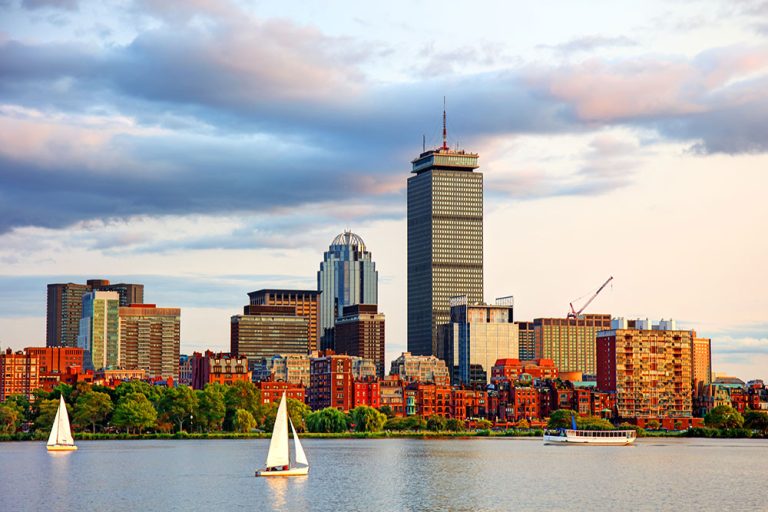 There’s no question that Boston has a lot to offer. From historic houses to Tea Party reenactments, evidence of the city’s role in American history is alive and well, giving the red-cobbled streets a distinctly New England charm. But the city is anything but stuck in the past. Nearby universities, including Harvard, MIT and Tufts, lend a young energy to the metropolitan area – and along with it, a variety of cool restaurants, music venues and shopping. You’ll also find world-class healthcare at the city’s many top hospitals and beautiful scenery in the iconic public parks dotting the area.

There’s just one problem: Boston is expensive. Like, really expensive. With a median home sale price of $615,000 and a median rent of $3,000, most prospective residents are unlikely to nab that coveted brownstone overlooking the Public Gardens. But not to fear! A number of smaller cities and suburbs in the area give you easy access to Boston, while offering their own individual appeal. In fact, if you ask many young self-proclaimed Bostonians where they really live, they’re likely to say that they technically live in nearby Medford, Waltham or even Worcester, where the rent isn’t quite so steep. Not only are these alternatives cheaper, but they also happen to be great places to live and work in their own right – and most are linked to the big city by public transit, should you need it:

You can drive or take the train from Worcester (pronounced “Wooster”) to Boston in less than an hour, but the two cities have little in common. For one thing, it’s a lot cheaper to live in Worcester – homes sell for a median price of $236,000, and the median rental cost is nearly $1,000 less, clocking in at $1,700 per month. For another, Worcester has a prime location in central Massachusetts that gives you easy access to both ends of the state, along with Providence, RI.

However, you don’t need to leave Worcester to enjoy top-notch arts and culture. There’s a “Little Italy” on Shrewsbury Street, a rich underground music scene, and a slew of retro lunch car diners, courtesy of the Worcester Lunch Car Company. After Boston, the city is the state’s largest center for the arts, where you can take in a Broadway play at the Hanover Theatre, see the symphony at Tuckerman Hall, or catch a concert at Mechanics Hall, which is one of the oldest concert halls in the country.

The downtown area is urban, but it’s not overwhelmingly big. However, for those who like quiet time, there’s always the Salisbury Hill neighborhood, where quaint, historic homes make up a tight-knit community, and the pretty walking paths of Elm Park.

Less than 12 miles west of Boston, Waltham is having a moment. Waltham isn’t cheap, but it’s significantly less expensive than Boston proper (median rent is around $500 cheaper) and is still linked to the big city by bus and commuter rail routes.

Located along the Charles River, much of the city has a suburban feel. However, residents don’t need to go far for a night out; Waltham’s Moody Street is a lengthy selection of dive bars, ethnic restaurants and hipster eateries. The city’s two universities, Brandeis and Bentley, draw students and academics to the area, and history buffs appreciate the city’s proud heritage. Its role in the Industrial Revolution is evident in sites like the Charles River Museum of Industry & Innovation, as well as old watch factories, some of which have been repurposed into apartments.

Less than 12 miles outside of Boston, Waltham is linked to the big city by bus and commuter rail routes.

Salem is located 16 miles north of Boston – about a 40-minute drive or a 30-minute ride on the commuter rail. Fittingly, its home costs are also miles cheaper: $365,000 is the median sales price for a Salem home, while the median rental cost is $2,025 per month.

The pretty coastal city is best known for its rich history. The site of the infamous Salem Witch Trials, Salem’s past makes itself known in sites like the Witch History Museum, along with other themed tourist attractions, modern witchcraft shops, and even high school sports teams (named “The Witches,” of course).

Living in NYC is notoriously expensive. Want easy access to the city without the high price? Check out these affordable alternatives.

Salem is not all cauldrons and Crucibles (though the city’s lively October Halloween celebrations might have you thinking otherwise). Salem was once an important seaport, and historic homes abound, as do lighthouses and even replicas of sailing ships. This makes for a truly charming setting. The Peabody Essex Museum houses an impressive collection of art, and it’s easy to stroll in one of the city’s many beautiful parks.

Though the city of Portsmouth is technically out of state, it’s still less than 60 miles north of Boston and only about an hour by car. It’s also ridiculously charming and much less expensive, with a median home cost of $420,000 and median monthly rent of $2,300.

Once one of the country’s busiest seaports and shipbuilding communities, evidence of Portsmouth’s marine heritage is everywhere you look, from its historic homes to its old lighthouse. And because the city still has an active port, the seafood is to die for.

Home to Tufts University, Medford is about a 15 minute drive from Boston. It also happens to be more affordable, with the median home sale price coming in at $562,450 and a median rent of $2,750 per month.

Outdoorsy types will love the city’s 24+ public parks, including the sprawling Middlesex Fells Reservation, which features many beautiful walking trails. If you’d rather spend time indoors, you can grab a bite at the many restaurants in Medford Square or catch a live show at the Chevalier Theatre.

Residents of South Medford can take a short walk to Somerville’s Davis Square, complete with shops, eateries, and outdoor music. They’ll also find easy subway access to the city from this area, supplemented by a number of bus routes throughout Medford.