Living in NYC is notoriously expensive. Want easy access to the city without the high price? Check out these affordable alternatives. 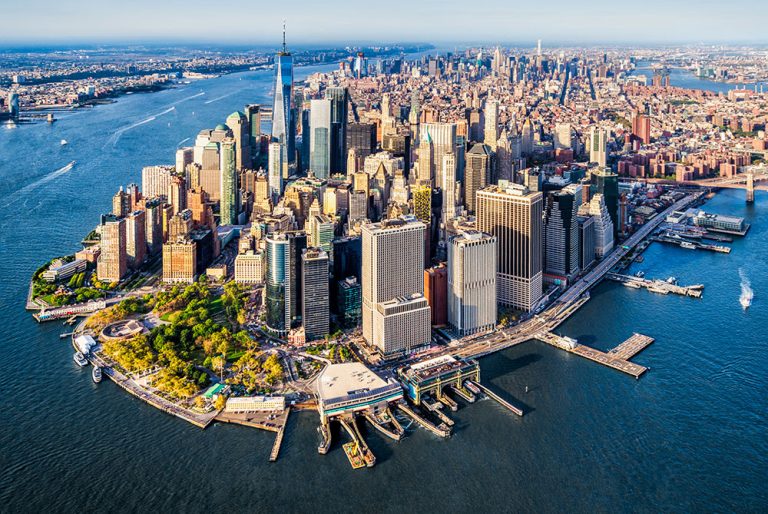 Ah, New York City. The city that never sleeps. The city where anything is possible. But all this greatness comes with a notoriously steep price tag – the cost of living in NYC is 68% higher than the U.S. average, and the average rent in Manhattan is over $3,000 a month. In recent years, even the more “affordable” neighborhoods in the Big Apple like Crown Heights, Ridgewood and Kingsbridge have become prohibitively expensive for many people.

If you’re looking for a fantastic place to live with easy access to NYC, here are six nearby cities and towns that offer a great quality of life for a fraction of the price.

Hop on a train from the small town of New Rochelle and arrive in Grand Central Station in just about thirty minutes. But besides a fairly short commute, New Rochelle offers more affordable living with small-town perks.

A studio apartment here can range from $900 to $1,500 a month, a huge price cut compared to Manhattan’s average of $3,667. This charming, walkable town of 80,000 is eight blocks by three blocks and provides a quiet respite from all the hustle and bustle of the big city with its beaches and parks.

10 Things To Do in New York City

With so much to see and do, it never gets boring in New York City.

Maplewood lies about 20 miles west of Manhattan, and you can get to Penn Station via the express train in 29 minutes. Now before you write off a city in New Jersey, Maplewood has some serious charm. An old-timey downtown village is dotted with locally-owned restaurants, coffee shops and retail, while the city itself prides itself on its tight-knit community.

Rent is significantly cheaper here than in New York, and a studio will cost you an average of $1,300. Add on the fact that Maplewood is known for its good public schools and the ability to have a yard of your own (yes, really!) and this city is a winner in our eyes.

Stamford is an easy pick for us because it has previously landed a spot on our Top 100 Best Places to Live list, boasts an easy, hour-long commute to New York City, and even has its own vibrant downtown scene for when you’re not up for a train ride.

As Connecticut’s third-largest city, Stamford gives residents a big city vibe with a lower cost of living and slower pace of life. A studio apartment here will set you back $1,632 a month, which isn’t exactly cheap, but it’s certainly more affordable than a comparable place in NYC.

While not one of New York City’s five boroughs, Yonkers’ 30 minute commute to Grand Central Station is actually shorter than the commute from parts of Brooklyn, and it’s definitely more affordable. Average rent in this city of 201,000 people is $2,283 a month, and you don’t have to pay those pesky New York City taxes.

Residents love this city because they don’t need to take a train into Manhattan to have fun. Yonkers itself is packed full of entertainment, ranging from local breweries to beautiful parks and gardens. It’s no wonder that Yonkers has been dubbed, “New York’s best kept secret.”

How much does it really cost to live in New York City? We asked someone who relocated to give us all the details. (And we mean ALL.)

A section of Mount Vernon in the luxurious Westchester County, Fleetwood is a tiny town of 20,000 with a quiet, suburban feel to it. It’s often viewed as Mount Vernon’s most affluent area, but is still significantly more affordable than its nearby neighbor, New York City.

Renters can expect to shell out $1,450 a month for a studio or $1,800 for a one-bedroom. This small town offers everything you need to live comfortably, and many homes have their own private garage – something you’d never see in the Big Apple.

Steeped in history with an easy 40-minute commute into Manhattan, Tarrytown is an excellent choice for those who can’t afford to live in the heart of the city. John D. Rockefeller once called Tarrytown home, and neighboring village Sleepy Hollow is the setting for Washington Irvine’s Legend of Sleepy Hollow. You don’t have to be as rich as Rockefeller to live here now, as a studio apartment would set you back an average of $1,036.