You've definitely heard of these companies, but chances are you haven't heard of the cities and towns they call home. 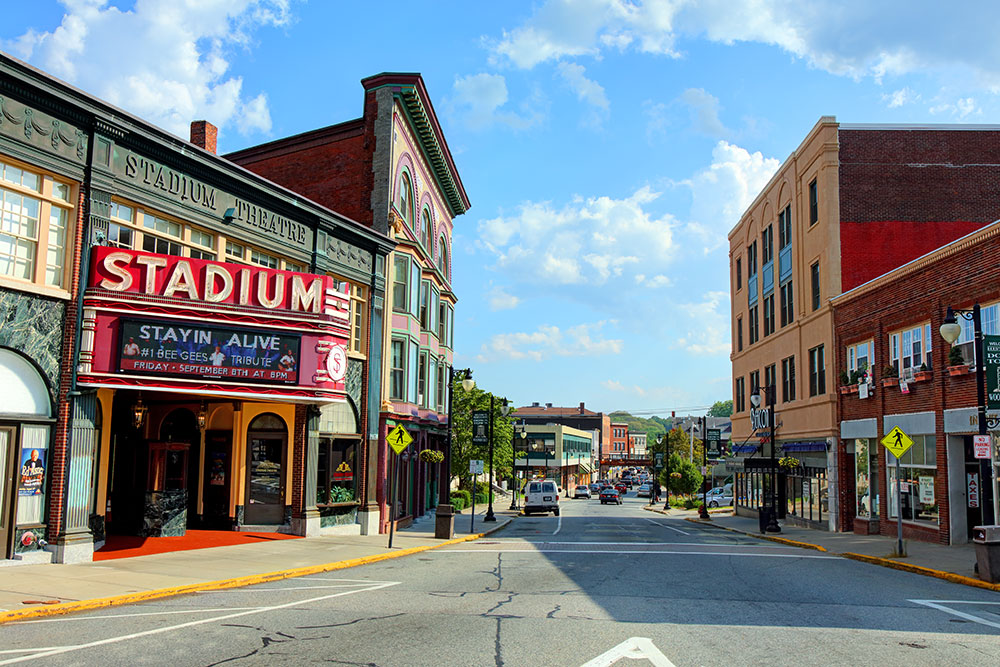 When you think of Fortune 500 companies and where they’re based, you probably picture major cities like Silicon Valley, New York City and Seattle. However, many heavy-hitting companies don’t call those large metropolises home. Instead, these internationally recognized companies have stayed true to the small cities and towns in which they were founded, and have helped their homebase cities evolve, bringing job opportunities and talent and fueling growth — in some seriously unexpected places.

These 10 cities have an excess of amazing jobs and not enough people to fill them. In other words? They’re waiting for YOU.

This city of 45,000 residents is known for its strong economy. Walmart, the world’s biggest retailer, is headquartered here, helping to boost the Northwest Arkansas region as one of the fastest-growing in the nation. Unemployment is low in Bentonville, sitting at around 3 percent. The city has scored top marks for its lack of crime, good quality schools and extremely affordable housing, making it one of our Best Cities for Families. Need a job? Walmart is currently hiring for hundreds of positions in Bentonville, ranging from project managers and software engineers to paralegals.

We asked seven successful founders how they chose where to start their businesses. Their priorities might surprise you.

Ok, ok. While not technically a Fortune 500 company, we thought we’d bring Kohler into the mix as it’s one of the largest private companies in the nation. The tiny village was originally dubbed Riverside, but when plumbing manufacturer Kohler opened a plant in 1900, the town was renamed in its honor. Conceived as a model company town, Kohler is a picturesque little community now of 2,120 residents.

Kohler the company is known for its beautiful, aesthetically pleasing faucets, sinks and toilets, and this high-end aesthetic most definitely applies to its namesake town as well. Visitors and residents describe the town as “luxurious” with its two top-rated golf courses, spas and a five diamond-rated resort. If this sounds like a dream to you, the company is currently hiring! Social media coordinators, chemical engineers and content editors are needed, so why not toss your hat in the ring?

Hartsville is the epitome of a small, charming Southern town. It’s also the home of Sonoco Products Company, one of the world’s largest consumer packaging companies. The company humbly began with a team of 12 in 1890 and has since grown to employ more than 20,000 and is the leading manufacturer of composite cans, cores and tubes. Myrtle Beach is just a couple hours away, the climate is mild (summer temperatures average 78 degrees), and crime is low here, making it an excellent choice for your next move. Sonoco is hiring more than 30 positions at company headquarters, and according to reviews, it’s a great place to work with excellent benefits, including an above-average 401(k) plan.

Woonsocket is one of the best cities to live in Rhode Island, and it’s pretty easy to see why. Woonsocket is a beautiful, historic city with a great central location to Providence and even Boston. The city is extremely walkable, and its small population of 42,000 people means almost everyone knows your name. Each year the city hosts a huge blowout bash called Autumnfest that is known all across Northern Rhode Island. Oh, and it also hosts the CVS Health national headquarters with 246,000 employees.

The presence of CVS Health continues to draw in talent and boost the city’s economy. Currently, CVS operates more than 6,200 stores in 43 states, and has only continued to grow after the company acquired Target’s pharmacy and retail clinic business in 2015. According to Indeed, there are a whopping 315 jobs available at CVS Woonsocket headquarters and in nearby cities, so opportunities abound.

Cereal lovers, rejoice! Battle Creek, MI has been lovingly nicknamed “the Cereal City” due to it being the birthplace of Kellogg’s corn flakes and C.W. Post’s Grape-Nuts. After acquiring Pringles from Procter & Gamble in 2012, Kellogg’s is now considered the world’s second-largest snack producer. (In case you’ve always wanted to see it, Battle Creek is also home to the “World’s Largest Breakfast Table.”)

But it’s not all crunchy breakfast goodness here. The city of 51,286 residents prides itself on its low cost of living (13 percent below the national average!) and its high-quality school system. Young professionals flock here to get their start in the food processing or health care industries, while families enjoy the small-town feel and many parks. Intrigued? Kellogg is actively seeking interns for Summer 2019.

South Carolina isn’t the only Carolina with a Fortune 500 presence. Headquartered in Mooresville, NC, Lowe’s employs more than 310,000 people in North America and is the second-largest hardware store chain in the nation. The company was originally headquartered in Wilkesboro, NC, but its new corporate office in Mooresville features a 7-acre lake below the building. Mooresville is booming after the arrival of Lowe’s in 2004, and it definitely lives up to its name of Race City, U.S.A.

If you’re a motorsports fan, this is the city for you, as it is home to many NASCAR teams and drivers as well as the North Carolina Auto Racing Hall of Fame. Whether you want to work in motorsports or prefer the home improvement industry, Mooresville is overflowing with job opportunities. At least a dozen positions, including the director of deployment operations, are up for grabs at Lowe’s corporate.

While completely different than its Texas namesake, Austin, MN has its own charm. This city of 24,563 has experienced huge growth lately, and with a bevy of job opportunities and a cost of living that is a whopping 24 percent lower than the national average, this Austin deserves a second look. In 2015, it landed a spot on NerdWallet’s Best Small Cities in America, and it’s only gotten better since then.

Currently, the city is chugging along on a project called Vision 2020, a grassroots movement dedicated to improving multiple sectors, including wellness, economic development and tourism. To top it all off, Austin is home to Fortune 500 company Hormel Foods. The meat products company employs more than 20,000 worldwide. If you’re a meat lover looking for a career change, Hormel is hiring more than 30 full time positions in its corporate office in Austin.

Findlay is a quiet, safe, suburban city with great schools and lots of parks. It’s extremely affordable, too, with median home prices clocking in at $123,800. The city has four consecutive Top Micropolitan Community recognitions under its belt thanks to its fast-growing economy and its excellent climate for new and expanding businesses alike. Leading the pack in economic advancement in Findlay is Fortune 500 company Marathon Petroleum, America’s largest petroleum refinery. The company most recently acquired independent oil company Andeaver for $23 billion in 2018, and now employs 43,800 people. There are currently 24 jobs up for grabs at Marathon Petroleum in Findlay, so what are you waiting for?

If you have a sweet tooth, this is the city for you. Dubbed “The Sweetest Place on Earth,” Hershey, PA, makes life super sweet for its residents. Street lights shaped like Hershey Kisses line the roads with names like Chocolate Avenue. Hershey features a small-town feel with incredible, top-rated schools and parks. It’s also super quiet — unless you live right next to Hersheypark and can hear all the screams from the thrilling rides!

12 Top Employers in Pennsylvania (And Some Seriously Cool Job Opportunities)

These companies help make Pennsylvania the best place to grow a career.

The Fortune 500 company responsible for such a sweet town is none other than The Hershey Company, one of the world’s largest chocolate manufacturers. Hershey products are sold in more than 60 countries worldwide, and the chocolate empire employs 21,000 full-time employees. While they are currently not hiring any taste testers, the company is hiring for multiple positions, including food technologist, packaging engineer and candy production workers.