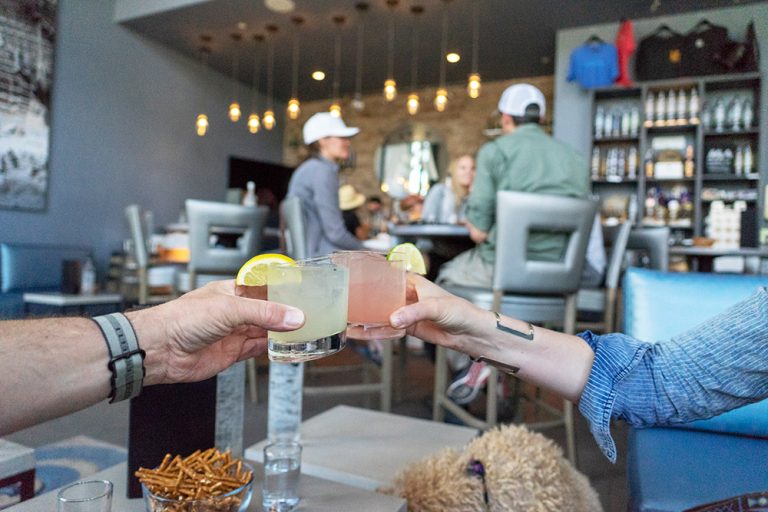 We’re not about dry January over here, especially when it comes to trying some truly awesome spirits from across the country.

It’s easy to fall into the habit of eating, drinking and doing the same old things. Habit is easy, and it’s comfortable. But sometimes, the greatest pleasures come in stepping outside your comfort zone and discovering new things. And when that new thing is a beer or cocktail that you can tell from the first sip will be a classic? Well, it doesn’t get much better than that. So let’s explore some soon-to-be favorite libations and the beautiful towns and cities that inspired them.

Bend, OR
Currently, Boneyard is only available in Oregon, which might make it the best possible excuse to visit Oregon. That’s not a knock on Oregon, just a testament to the deliciousness of this beer. (Full disclosure, while I’m not getting any kickbacks from Boneyard for this article, I am wearing one of their sweatshirts right now). The slightly macabre name comes from the fact that all of their original equipment was made up of used, scavenged parts. With dozens of beer options, you can’t go wrong, but everyone should try the inspired Fuego Rojo, a spicy habanero red ale. Of course, it doesn’t hurt that both their pub and brewery are located in Bend, OR.

Perched on the banks of the Deschutes River and under the shadow of Mount Bachelor, Bend is a veritable paradise for the outdoor enthusiast and was on our 2021 Top 100 Best Places to Live list. One of the highlights is the Lava River Cave, a 12-mile long lava tube that is open to explore. In addition, there are a plethora of small restaurants and idyllic shops in town, along with a *checks calendar* Blockbuster Video? That’s right, the last remaining Blockbuster in existence can be found in Bend!

Salt Lake City, UT
Epic Brewing has some of the most innovative and drinkable beer around. With a second location in Denver, their original brewery can be found in Salt Lake City. There you’ll find Epic’s tap-less taproom, which also happens to be the smallest taproom in Utah. Keep in mind that each person will need to order a meal to enjoy the in-house tasting options due to Utah liquor laws. If you’re feeling up for a tasty adventure, pick up a mix-and-match six-pack of your favorite brews to take to go.

Besides the world-renowned skiing, mountain biking, hiking and general natural beauty surrounding Salt Lake, the city has some truly unique experiences. A visitor favorite is the Victim of the Beast Gravestone, the burial place of Lilly Gray, where the inscription on the tombstone reads “Lilly E. Gray, Victim of the Beast 666,” and no one is quite sure why. Other notable attractions are the Gilgal Sculpture Garden and the Summum Pyramid, home of the Summum religion founded by Summum Bonum Amon Ra (born Claude Corky Nowell), who, among other interesting things, practice modern mummification.

Portland, ME
Maine Craft Distilling set out to become the first Maine distillery to make whiskey in the Scottish tradition, using only locally sourced ingredients. They succeeded and have since expanded to rums, vodkas, and even Blueshine — a blueberry-maple syrup creation that goes wonderfully with breakfast. The distillery works with local farmers to produce, as they call it, “Farm-to-flask” spirits. And with a public house right in the distillery, it couldn’t be easier to sample all they have to offer.

Afterward, you won’t want to miss out on exploring Portland, which is home to the world’s only Cryptozoology Museum, boasting an unparalleled collection of cryptid exhibits. And if big feet and merfolk seem a little ho-hum to you, then there’s always the Umbrella Cover Museum, shockingly also a world’s first. If you want to get outside and miss out on the jaw-dropping fall foliage, then Fort Gorges makes for a pretty spectacular consolation prize; just make sure to plan ahead, as you’ll have to commandeer your boat to get there. Finally, while it’s probably cheating to throw in a second purveyor of booze here, the tasting room of the renowned Allagash Brewing Company is more than worth a visit.

Seattle, WA
Fremont Brewing has made quite a name for itself as Washington State’s largest maker of barrel-aged beers, available all over most of the western United States. While the brewery is in neighboring Ballard, their taproom is located in the fun, funky Fremont neighborhood of Seattle, WA (who dubiously claim to be the center of the universe). While they have something on tap for everyone, if you’re a hops junkie, then consider this your mecca.

Once you’ve drunk your fill, there are plenty of world-famous tourist attractions in Seattle. Activities like a visit to Pike Place Market or the Chihuly Glass Museum, a Seattle Underground Tour or a scenic ferry ride are all well known for a reason. If you want to stick to Fremont, you can take a walking tour of some truly one-of-a-kind statues; leave a memorial button for J.P. Patches, grab a Turkish coffee at Cafe Turko next to a chunk of the Berlin Wall and snap a photo with the Fremont Troll. And while Seattle has more good food than you could get through in a year, nothing rounds out a day of sipping IPAs like a Dick’s burger or four.

Nashville, TN
Nelson’s Green Brier has an incredibly in-depth distillery tour that culminates in a wonderful tasting room. While Jack Daniels may be synonymous with Tennessee whiskey for many people today, before prohibition, Charles Nelson’s product was the best-selling Tennessee whiskey in the world. Long defunct, it was revived in 2011 by two of his descendants, using their great-great-great-grandfather’s original recipe. Located in a quiet neighborhood of Nashville, TN, the distillery is still close to several restaurants and music venues.

Once you’re done at Nelson’s, it’s time to decide which kind of Nashville trip you want to have — do you dodge pedal-taverns and bachelorette woo-girls at the Lower Broadway honky-tonks? If so, make sure you go to Robert’s Western World, the last of the authentic Nashville honky tonks. While NashVegas is all many travelers see, there are other options well worth exploring, like funky East Nashville sips at 3 Crow Bar and bites at Five Points Pizza (or a little of both at Dino’s!). Speaking of bites, a must-not-miss eatery is Arnold’s Country Kitchen. Even off of Broadway, you’re likely to find talented musicians playing nightly at most bars. And, of course, no trip to Nashville is complete without some hot chicken! There’s a lot of fighting about the best place to burn your taste buds off, but my favorite was also the one that was closest to me at the moment.

Milton, DE
Milton has exploded in recent history, nearly doubling its population over the past 20 years. Surprisingly, though, that only brings the total residents of this sleepy town up to just shy of 3,000 — however, many people know of this quaint town because of the famed Dogfish Head Brewery. A pioneer of craft beer and creative flavors, Dogfish specializes in seasonal brews and one-offs. Some of their inventions include the 120 Minute IPA, which can reach a room-spinning 20% ABV (over four times that of a traditional lager), and their Liquor de Malt, the world’s first bottle-conditioned malt liquor. Yes, it comes in a 40-ounce bottle. Yes, it comes in a brown paper bag.

Milton was settled in the 1600s and used as a shipbuilding hub in the 18th and 19th centuries. The town is perched at the meeting-place of the Broadkill River and Delaware Bay, making it both picturesque and strategic. Obviously, that makes the nearby land a joy to explore — birders will especially enjoy the Prime Hook National Wildlife Refuge.

Carbondale, CO
Named after nearby Marble, CO, all of the water used in Marble Distilling Co handcrafted spirits is filtered through calcite Yule marble, giving their creations a clean, crisp purity. The dog-friendly tasting room is modern yet cozy, and their original cocktails are well worth trying.

While Aspen often makes all the headlines, Carbondale is only forty minutes down valley and is arguably an even cooler town. You’re less likely to run into a famous actress or rock star here but 100% more likely to catch the Carbondale Wild West Rodeo, discover a local artist at Carbondale Public Arts or catch a glimpse of the imposing Mount Sopris.

Cocktails accompanied by a sweeping city view? Sign us up!

It’s also home to KDNK Public Radio, located directly behind Marble Distilling. KDNK is one of the last remaining public radio stations to use an entire stable of live volunteer DJs. And if you’re in town on just the right fall weekend, head over to Potato Days which is, well, exactly what it sounds like. After all that, when it’s time to lay down your head, the Marble Inn (located directly above the tasting room) offers the best lodgings in town.

Chicago, IL
Koval Distillery made history when it opened in 2008 by being the first distillery to operate in Chicago since prohibition. They make a wide range of whiskeys, gins and liqueurs, all of which are organic and kosher. Their most unique creation is Koval Bierbrand, a brandy distilled from beer that is a German classic and is just now making a reappearance stateside, thanks in no small part to Koval. They also host many distillery tours, with plenty of opportunities to sample the spirits getting rave reviews.

You probably don’t need to be told that there are a few other things to do in Chicago. And while first-time visitors should absolutely take a selfie in front of the Bean, see the best Impressionist collection this side of Paris at The Art Institute of Chicago and marvel at the honest-to-goodness largest Museum of Science in the whole Western Hemisphere, there are also some lesser-known treasures to be found. Test your fear of heights at the Willis Tower Skydeck, take a break from the city without even leaving it at the Garfield Park Conservatory and visit the Wicker Park Secret Agent Supply Co. — even if I can’t tell you what to do there. Not without the password.

And finally, with one of the highest densities of experimental cuisines in the world, there are too many restaurants in Chicago to properly recommend. But one dish must be tried; while getting a reservation at Girl & the Goat can be a bit challenging, there are often weekday tables available at the bar right at opening. And once seated, make sure you order the duck tongues. No, really. Trust me.