Travel changes what 'home' means to me, in ways that surprise myself and my Uber drivers. 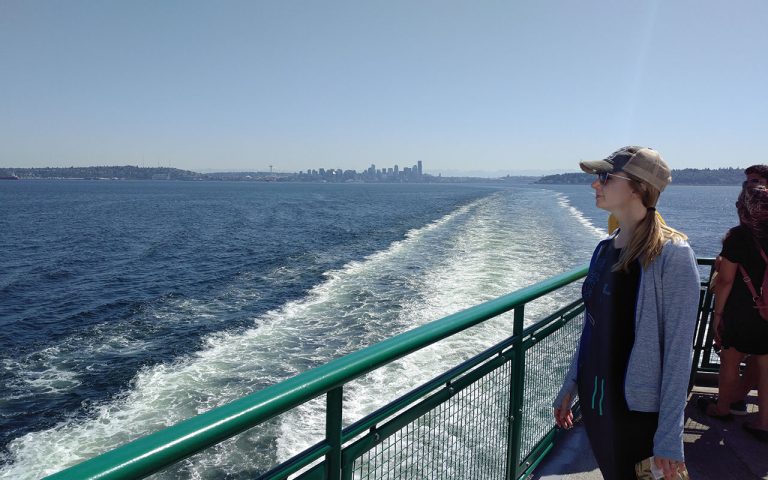 I’m never more Iowan than when I’m outside of my home state.

My eagerness to share where I’m from radiates from the back seat when I’m riding in Ubers, waiting for the driver to give me any excuse whatsoever to say, “Oh, but I’m not from here.” And there’s always an excuse in an Uber. Merely glimpsing a new skyline will do. “I’ve never seen these buildings before because I’m from Iowa,” I’ll say, smiling.

It’s not generally considered to be an interesting place to be from. The opposite, actually. So why do I have this urge?

Part of it comes from a desire to shatter notions that “city people” might have about people like me from flat states in the middle of the country. I want them to see me as smart/funny/friendly, and thereby deduce that other Iowans must also be those things. I elect myself as a representative of the state as soon as I climb in the backseat of rideshares, though my methods of representing it are a little haphazard. This is mostly because I’m not used to bragging about my state.

13 Questions About Living in Iowa, Answered by a Brutally Honest Iowan

One of the things my city, Cedar Rapids, is known for is our long-running Quaker Oats mill, so occasionally I blurt something out about that.

I know I’m not the only one who gets a kick out of representing Iowa. When I’m in an airport far away from home (something that hasn’t happened in over a year), I often spot Hawkeye shirts. It’s common for Iowans to wear them when traveling like we’re an away team sporting our uniforms. And when two people in Hawkeye (or Iowa State or whatever) shirts spot each other from across the airport, duck – because we’ll exchange the biggest, cheesiest waves you’ve ever seen.

There’s a delightfully irreverent gift shop based in Des Moines called Raygun where you can buy t-shirts emblazoned with slogans like, “Des Moines: French for ‘The Moines’” and “Iowa: 75%… END_OF_DOCUMENT_TOKEN_TO_BE_REPLACED

When I flew to Seattle a couple of years ago with my husband and two friends, we didn’t have to announce our foreignness with shirts. It was made apparent simply by the way we walked up the hilly roads, which is to say, very slowly. At one point, an older woman with a cane passed us, clearly annoyed by our slow speed. Dogs, children — everyone went around us as we huffed and puffed.

Out of breath and exhausted, we’d pile in Ubers, ready to represent our state, or at least make the driver laugh.

“Where do you put the cornfields?” my friend Jerry said jokingly between breaths.

While in Seattle, we rode a ferry to nearby Bainbridge Island, a scenic journey with views of mountains. We stood on the deck taking pictures with our hair gloriously blowing in the wind, as though we’d never experienced wind before. We ran around the entire ship unable to decide what would make the coolest background – the Space Needle or just the glorious ocean.

When we got to the island, we ate wood-fired pizza piled with arugula that somehow tasted better than just about any pizza I’d ever had. Then we wandered down to the dock to take photos by the boats, which, come to think of it, was an odd thing to do. We had seen boats before. I’m not sure if someone from Seattle visiting Iowa would take pictures with corn in the background, though they’d certainly be welcome to.

On the ride back, feeling sunburnt and full, it occurred to me that half of the ferry passengers looked positively bored. The bored folks — commuting for work, perhaps — sat indoors (indoors! With mountains outside!) on hard plastic seats eating what looked like mediocre hot dogs. Why the ferry even had an indoor seating area was beyond me. I would’ve gladly been drenched in a downpour rather than miss the stunning views.

But I think where you’re from always seems a little boring when you’re there, eating a hot dog on your commute. My friends and I often joke about our town being kind of boring, which is why the pride I feel when I travel takes me a bit by surprise. It feels cheesy to admit, but I am proud of where I’m from, even if I don’t always communicate it properly. It’s like teasing a sibling who you’d defend with your life.

“Where are you all from?” one Seattle driver asked us to our delight. He had an accent that indicated he probably wasn’t in his hometown either.

“We’re from Cedar Rapids. It’s not as cool as this city. We don’t have mountains or anything,” Jerry said, gesturing toward the scenic view out the window.

“You should be proud of where you’re from. I’m from a small village in Africa, but that’s my home,” the driver said in a gentle but firm way, making us all immediately red in the face. We all tried to backpedal – a tricky thing for four people to do simultaneously.

But he was right. It’s not an embarrassing place to be from, and it’s not even boring, to be honest (though I might not admit that to my friends). Plus, we do have a mountain (kind of). It’s a closed landfill affectionately called “Mount Trashmore” that was converted into a hiking and recreation destination a few years ago. The transformation of the site, which includes an overlook at 948 feet, was pretty impressive. And I have to say, the view from the top – where you can see the whole city – is stunning.

The next day, it was time to hop in another Uber on our way to the airport. That time, we didn’t miss a beat.

“Where are you guys heading to?” the driver asked.

“Back home to Cedar Rapids,” Jerry said, smiling at the rest of us, with maybe — just maybe — a hint of pride in his voice.