We speak with David Clark, professor of economics at Marquette University, to ask the all-important question: Why? 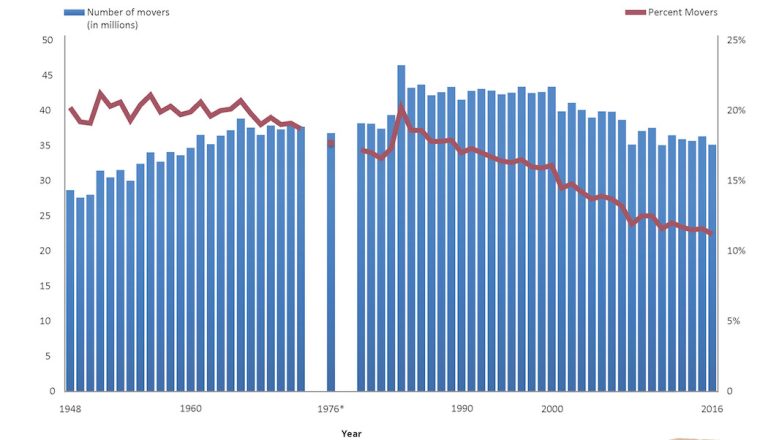 Whether it is cross-country or across town, the percentage of Americans moving has dropped to an all-time low, but analysts are unable to pinpoint an exact reason for the decline.

Why So Many Americans Are Moving South Or West

Instead, a variety of factors are cited, but regardless of the reason, the bottom line is that fewer Americans are loading their possessions into the moving van.

The main reason cited among those who moved in the 2015-16 period was related to housing, with 42.2 of those who moved citing reasons such as wanting to own instead of rent; a new or better home or apartment; better neighborhood; or more affordable housing.

“You can think of a number of different possibilities,” said David Clark, professor of economics at Marquette University in Milwaukee. “Some of this can have to do with the general state of the economy. The economy is growing, but it’s growing at kind of a modest pace. So, those types of moves that result from job relocations can be detrimentally impacted by slower economic growth. That can certainly be one factor.”

Should You Move? Take Our Quiz to Find Out

“One reason is just demographics,” said Clark, whose areas of expertise include migration patterns in the U.S.; housing demand and supply; and regional economics. “If you think of the demographics of migration, there are peak periods when people normally move. That tends to be at the time that they finish their education and get those first jobs. And then when you have some type of transition in life, circumstances such as retirement.”

The percentage of Americans moving each year hovered around 19 to 20 percent from 1947 to 1970 before dropping slightly. However, from the 20.2 percent in 1984-85, the number of people moving has dropped steadily to the current low.

Millennials coming of age – including marrying later and having children later than previous generations – might be a factor, Clark said.

“We do know this millennial population is one that is behaving differently than their earlier cohorts, the Gen-Xers and Baby Boomers,” Clark said. “Economists and sociologists and demographers are trying to figure out is it simply because their economic circumstances are different, or is it because they have different preferences. I don’t think they’ve completely sorted that out. It’s going to take a while to do that, but it’s probably a combination of both.”

Where Are Millennials Moving To?

Among the other factors cited by Clark that may preclude people from moving are obligation to children, especially those of school age; elderly parents; retirement status; available health care; and families that have multiple earners, which requires replacements for two or more jobs in conjunction with a single move.

“There’s also the social networks that get disrupted,” Clark said. “It’s certainly easier to keep in touch with people over long distances than it used to be, with that said though, you think of all the social networking you'd have to adjust. You probably won’t have as many friends in a new location, it will take a while to make them. You have to get new doctors and dentists and those types of challenges. If you belong to a religious community, you have to find a new church.”

“It’s pretty complex, but the drivers are numerous and they’ll differ for different generations,” Clark said.