Skip to content
Home > Where to Live Now > Where Do Millennials Live?

Where Do Millennials Live?

The answer may surprise you. 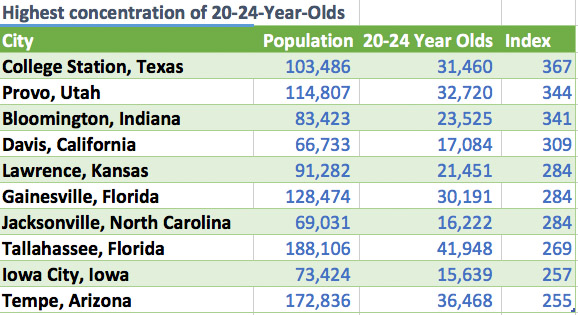 Much is written about what the millennials, these young twenty- and now thirtysomethings, want in life and the impact they have on the world and the world has on them. In Livability terms, they’re often credited (for good or bad) with the resurgence of downtown living. Great, so which downtowns are most full of these folks, a reader asked via Twitter.

This is Where U.S. Residents Are Moving in 2016

It’s a great question. The millennial generation, born roughly from 1980-2005, is the largest generation in history weighing in at just about 80 million people. They now outnumber their parents’ generation, the aging Baby Boomer. They have been trend-pieced to death and generally stereotyped in completely contradictory ways: they’re self-absorbed, but also dedicated to their communities and service; they’re entrepreneurial yet live in their parent’s basements and work at Starbucks; they’re totally governed by their helicopter parents, yet they are independent and live alone; they’re fascinated by “stuff,” yet they eschew ownership. But everyone seems to agree that they’re all “hipsters” who eat local organic foods, drink craft beers, hang out in coffee shops and live in dense, big cities. Which is true for one model of them, but with 80 million, it shouldn’t come as a huge surprise that many don’t fit this model at all.

It’s hard to accurately generalize about 80 million people. The key word there is accurately. But what you can generalize is that just about every city under the sun wants them to move in, start the next Google, and make their economy bigger than Tinder. Cities are remaking themselves in the vision of what they think millennials want. Since many things millennials are thought to want are actually solid components of livability, that can work to the advantage of people from all walks of life. Which is a good thing.

27 U.S. Cities, and How Much You Need to Make to Buy a Home in Each

But let’s stop all this high-level jibba jabba and look at some hard numbers. Where, exactly, are the millennials hanging out. To find out, we’ll look at the most recent Census data and look, not at raw numbers, but at concentrations.

First, let’s look at the concentration of 25-34-year-olds. This is the upper half of the millennial generation and the ones more likely to be making their own housing decisions. They’re not too young to be living at home, nor college-age and living at school. [Granted, while this is the most-educated generation ever, there are still many, many millennials who do not/will not attend a 4-year degree program].

At the top of this list is Somerville, Mass., an up-and-coming suburb of Boston, which also makes the top 10, as does Cambridge, the home of Harvard and MIT. The suburbs of Washington D.C. also do well. You might have expected to see Portland ranking highly, but you were probably expecting Oregon, not Maine. And then there’s that hipster hotspot, Minneapolis.

The 10 States Americans Are Relocating to Most

One thing we’ve written about a lot is that the millennials are aging, too. While they are getting married, having kids and starting their own households later in life, later is catching up with them. More than 12,000 millennials turn 30 every day. It’s not a bad idea to consider how that will change their housing needs and preferences. And indeed, if we focus just on the 30- to 34-year-olds at the older end of the millennial spectrum, we already see a shift toward the suburbs. San Francisco and Washington D.C. stay on the list – both with massive knowledge economies geared toward younger lifestyles. However you also now see places like Sunnyvale, Calif., Atascocita, Texas, a wealthy Houston suburban enclave, and Gaithersburg, Md.

The younger, more college-age millennials (20- to 24-years old) tend to cluster in college towns. Not surprising at all so we won’t dwell on that.

As I gaze into my magic 8-ball, here are the questions I ask and the answers I divine:

Will millennials live in the suburbs?

Will suburbs have to become a little more “urban” to accommodate changing tastes?

Will major urban centers (metro areas, including both cities and their suburbs) continue to thrive?

Will city centers continue to have a hard time keeping young families in search of “good schools?”

Will driverless/automated cars lead to a resurgence in sprawl?

Will millennials have a massive baby boom in the next few years?

My sources say no.

Is the shopping mall dead?

Don’t count on it.

Is the suburban office park dead?

Outlook not so good.

Do office parks and malls need some reinvention/updating?

Where should I invest in real estate?

That’s not a yes-or-no question, cheater.

Have I run this 8-ball thing into the ground yet?

You may rely on it.

Ok, all trend pieces aside the numbers are pretty clear. millennials will indeed live in suburbs – but for the most part, these are suburbs that are more like self-sufficient satellite cities of major urban centers. The suburbs at the top of the list, and as I eye-ball down the rankings further, are not big-yard, cul-du-sac sprawlvilles filled with strip malls and 8-lane cross-walk-free highways masquerading as streets and roads. These are not places with names related to what was cut down in order to put in the housing development that stands there now like Beautiful Orchard, Shady Glen, etc. The suburbs that are attracting this generation seem much more like cities with density, parks, amenities, things to do and – for the most part – identities onto themselves.