Skip to content
Home > Where to Live Now > Who’s Moving Where: Singles vs. Married Couples

In honor of our 10 Best Cities for Singles list, we take a look at where the nation's single and married people are congregating. 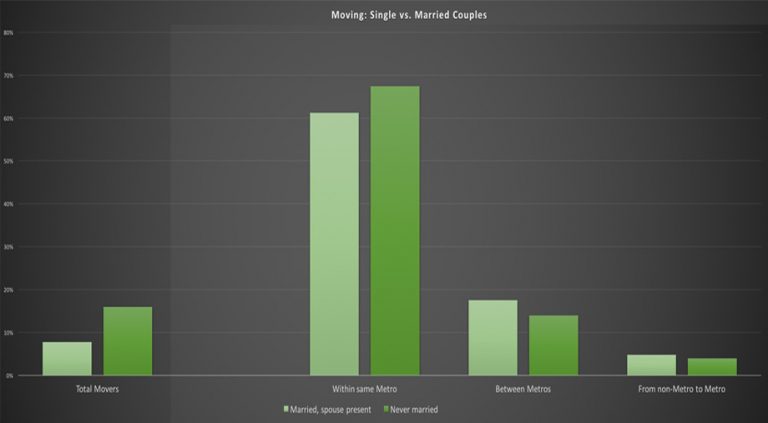 This week we release our 10 Best Cities for Singles. Part of the criteria was that the city have a large proportion of single people in peak marriage ages. The cities at the top of the list were, somewhat as expected the home of major colleges or universities. College is a time when many are single, and going to/graduating college is a time of life when many people move.

But more generally where do single people move, and perhaps just as importantly how does that differ from how married people move?

Two notes before we proceed: For this exercise we’re going to focus for the time being on the 85% of the U.S. population who live in metro areas, which are defined by a principal city and its suburbs. Also, we’re going to focus on two groups: married people who live with their spouses and single people who have never been married (i.e. excluding divorced, widowed, etc.). As a short hand, we’ll call these two groups married and single. All the data is from the U.S. Census Bureau.

Let’s start with where they’re starting. This may come as a shock, but married people live in the suburbs about 2:1 over the city. Single people are more evenly dispersed with about 40% living in cities versus 48% in the suburbs.

Singles are more flexible in their living arrangements. They’re tied to one job, not two, and don’t have to worry as much about school districts. Granted, there are plenty of un-married parents and married couples without school-aged (or any) kids, but for the sake of argument we’re generalizing here. All that said, we’re not that mobile of a society overall. In the last year, singles moved at twice the rate (16%) than married couples but that’s still a pretty small segment of the population overall.

Where Are Millennials Moving?