From alleyways to coffee shops, the arts are on full display in Tyler. 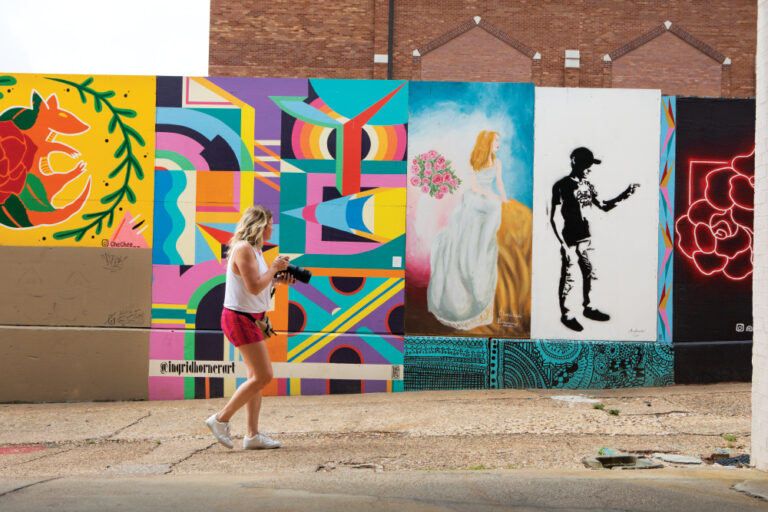 Many idyllic and generally successful towns typically boast a greater emphasis on arts and culture, and Tyler is no exception. The city, most known for its rose cultivation, is also an artist’s dream. From the local arts academy to an array of public artwork displays, Tyler lifts up local and outside artists alike, brightening the community one mural, drawing or photograph at a time.

“The goal is to enhance the destination aspect of downtown Tyler,” she says. “A part of that is Gallery Main Street, which has served as an art hub for over 10 years.”

Gallery Main Street is inside Plaza Tower in downtown Tyler, receiving plenty of foot traffic from the square and other local businesses. It features consistently rotating exhibits with works coming from downtown organization partners, like a recent collaboration with local arts magnet school Caldwell Academy.

“We knew we had to start working more with these talented kids,” says Varona. “It’s been so wonderful to see, to know that here in Tyler we have a public education system that’s fostering their talent and ability.”

Every exhibit, whether it’s the work of a local school or senior center or the gallery’s featured artists, receives a full reception and every piece has a wall card, just like a professional artist’s exhibit would.

Also within steps of Downtown Tyler Square is Art Alley, a project birthed from the premise that art can completely transform any area.

“We had this blighted alley that was the pathway from downtown to the parking garage,” Varona says, noting that San Marcos’ Kissing Alley was the initial inspiration. “We asked artists to donate their time and talent and we’d pay for paint and supplies. We had almost 100 artists apply to contribute, including some folks who’d never painted murals before, Caldwell Academy and even some professional artists.”

What resulted was 280 feet of artwork in the form of over 40 murals from more than 50 different artists.

Part of Tyler’s enthusiasm about its arts scene is credited to businesses like SHINE, which supports artists while also serving the community. The organization, which has its flagship storefront and cafe downtown, donates all of its proceeds to single mothers in need, with many of the shop’s products made by those moms.

“Art is one of the ways we connect community members with our mission,” says SHINE founder and director Suzy Stjernstrom, who’s run the nonprofit for more than three years.

The coffee shop is just over a year old, but SHINE is already well on its way in terms of exhibiting art installations. Themes like “Identity” and “Bigger Than Texas” have been featured so far, highlighting local artists.

SHINE is also proud of its iconic, wall-sized mural that greets customers with “Bigger Than Texas” and its branded SHINE mural, embracing any and all who walk in to support its mission and the artists’ work.

“Art feels accessible here,” says Stjernstrom. “This is a growing community that appreciates it.”