Seattle has always been a destination for music nerds. But don't sleep on these other Washington cities... 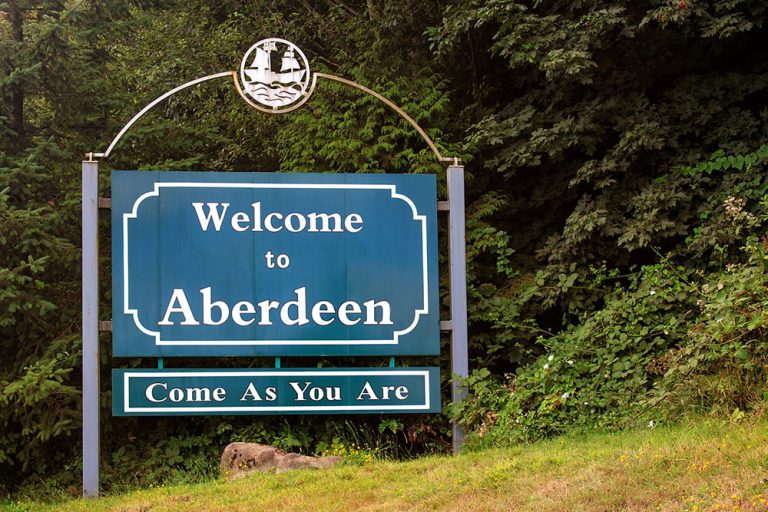 Every year millions of tourists flock to Seattle. In fact, an estimated 40.9 million people visited the city in 2018. That’s a lot of smoked salmon and coffee! While there are endless reasons to visit the Emerald City (I lived there for 15 years, so I know how great it is), one popular pull is the region’s wealth of music history.

You can stay at The Beatles suite in the Edgewater Hotel, where the band famously fished out of their room window, and pose for pictures with the Jimi Hendrix statue on Capitol Hill at E Pine St. and Broadway E. And every music fan needs to go to the Museum of Pop Culture (formerly the Experience Music Project), which is packed with all kinds of memorabilia.

Seattle is undeniably a huge part of music history. But it’s not the only place in Washington that deserves attention from music nerds: In the ’50s and ’60s Des Moines, WA, was a haven for rock and rollers; in the ’80s Bellevue was home to a thriving metal scene, which made way for one of the world’s most commercially successful prog-metal bands, and in the ’90s Olympia was the epicenter of the riot grrl movement.

Read on to learn about eight other places in Washington every music nerd needs to visit. And while you read, we highly suggest you listen to the music of the Northwest with this Spotify playlist featuring several of the bands and songs mentioned here.

Kurt Cobain didn’t love growing up in Aberdeen, WA. He said in a 1992 interview, “Basically if you’re not prepared to join the logging industry, you’re going to be beaten up or run out of town. They chased me up to the castle of Aberdeen with torches. Just like the Frankenstein monster. And I got away in a hot air balloon. And I came here to Seattle.”

Thankfully, Aberdeen has changed a lot in the past couple decades. Today, they’re proud of their most famous resident and the city’s welcome sign includes the phrase “Come As You Are,â€ a nod to Nirvana’s 1992 hit. Cobain’s legacy is also celebrated at the Kurt Cobain Memorial Park under the Young Street Bridge along “the muddy banks of the Wishkahâ€ River. (By the way, La Salvadorena Restaurant is a 15-minute walk from the park and you don’t want to miss out on the cheese pupusas and fried plantains.)

Speaking of Nirvana, not many people know the band actually played their first show as Nirvana in 1988 in Tacoma, WA. The venue was Community World Theater at 5441 South M Street, which still stands today (though the building is now a church). And that’s just the tip of Tacoma’s music history – it was also home to one of America’s first and most influential garage rock bands, The Sonics. Everyone from Bruce Springsteen and Eddie Vedder to Jack White have cited the Sonics as an influence, and in the ’60s the band often played at the Crescent Ballroom. It’s no longer a venue, but that building also still stands today at 1302 S, Fawcett – Nirvana, Soundgarden and The Melvins also played there. Singer-songwriter Neko Case moved to Tacoma when she was in her teens and she sings about the town in her song “Thrice All Americanâ€ – “I want to tell you about my hometown / It’s a dusty old jewel in the South Puget Sound / Well the factories churn and the timbers all cut down / And life goes by slow in Tacoma.”

When you visit, don’t leave without a sandwich from MSM Deli. It doesn’t look like much more than a small convenience store a few blocks outside of downtown, but the sandwiches that come out from behind that counter are sheer perfection.

Bing Crosby was born in Tacoma, but his family moved to Spokane when he was a toddler. That’s where he honed his craft that would ultimately make him one of the world’s most famous crooners. (His childhood home at 508 E. Sharp Ave. is now the Bing Crosby House Museum on the Gonzaga University campus.) In the 1920s Crosby worked and performed at the Clemmer Theater, which was later renamed the Metropolitan Performing Arts Center.

In 2006 the historic building was named the Bing Crosby Theater, and it now hosts concerts, comedy performances, film screenings and more. More recently, rap duo Macklemore and Ryan Lewis made Spokane famous all over again when they filmed the video for their 2015 platinum hit “Downtownâ€ in the city’s downtown district.

It’s true that Sleater-Kinney got their name from a road in Lacey, WA – Sleater-Kinney Rd. is exit 108 when driving to S-K’s hometown of Olympia via I-5 South. In fact, Washington State’s capital is peppered with landmarks from the riot grrl era, but the epicenter has to be Evergreen State College on Evergreen Parkway. Members of Bikini Kill first met at the liberal arts school and it’s also where the punk-turned-dance pop outfit The Gossip got started. These days Gossip singer Beth Ditto can be seen alongside Kirsten Dunst in Showtime’s On Becoming a God in Central Florida, but back in the ’90s Ditto flexed her fiery vocal talents (and sometimes even stripped down to her skivvies!) while playing all-ages shows around the city.

Also good to know: One of the city’s best venues is still operating today. Through the decades, Capitol Theater at 206 Fifth Ave SE has hosted just about every noteworthy punk, rock and indie band, including Sleater-Kinney, Jawbreaker, Fugazi, Built to Spill and so many more.

Death Cab for Cutie is often referred to as a Seattle band, but Pacific Northwesterners know the godfathers of indie rock are actually from Bellingham, a small college town about 90 minutes north of Seattle. And back in the late ’90s – before the band went Platinum, got nominated for a Grammy, and collaborated with Chance the Rapper–the Death Cab guys were all Western Washington University students living together in a small house on Ellis Street. The musicians have since left town – they live in Seattle and Portland now – but one Bellingham staple still stands strong: Casa Que Pasa’s potato burrito was and continues to be the best pre-show sustenance.

Not many people outside of Washington have heard of Des Moines. Hell, not many people in Washington could point it out on a map. But the little town tucked between Seattle and Tacoma was once home to a bustling rock scene thanks to the Spanish Castle Ballroom, a venue that actually looked like a castle and hosted rock ‘n’ roll giants including The Beach Boys, Roy Orbison, The Sonics and The Wailers. It was also the stomping ground for one especially not-yet-famous but very enthusiastic teenaged guitarist named Jimmy Hendrix. Hendrix eventually changed his name to Jimi and went on to become one of history’s most revered guitarists but he never forgot his roots – in 1967 he recorded a song called “Spanish Castle Magic.”

Today the plot of land at 23003 Pacific Highway S. houses a Walgreens, which is hardly rock ‘n roll, but hey, what’s keeping you from grabbing your guitar and getting weird in the snack aisle?

Anacortes is a charming island town that’s worth visiting even if you aren’t looking for music-related landmarks. The Business is a fantastic record shop and Pelican Bay Books & Coffeehouse has just about every book you could ever need. And there’s also Mount Eerie, the 1,273 foot-tall mountain, and Mount Eerie, Phil Elverum’s lo-fi indie folk project. Mount Eerie’s 2017 album A Crow Looked at Me, a blunt and poignant concept record about the death of Elverum’s wife GeneviÃ¨ve CastrÃ©e, was praised by The Atlantic, Pitchfork, GQ, The New Yorker and more. Over the years Elverum has managed to escape the island a few times – he’s lived in Olympia, Norway, and toured extensively – but in 2008 he told L.A. Weekly, “It’s challenging to live in Anacortes … But I have a long life ahead of me. I’ll probably live in many different places, and then die in Anacortes.”

Before going on to sell tens of millions of records around the world, Queensryche was just a little band in Bellevue, WA called The Mob. They covered Iron Maiden and Judas Priest songs and they practiced in drummer Scott Rockenfield’s parents’ garage. It was in that garage that they recorded their first demo, which they passed on to the owners of the now defunct Bellevue record store called Easy Street Records. (Worth noting: Easy Street still has a location in West Seattle.) Queensrych didn’t play around Bellevue all that much before hitting it big – once they changed names they focused on writing and recording – but when they were still known as The Mob, they played the Lake Hills Roller Rink at 16232 NE Eighth St. (Heart would perform there from time to time, too.) Today that plot of land is a city park, but if you really listen, you can still hear some wicked guitar riffs hanging in the air.