Health care careers are booming in Minnesota. Here's where you can find jobs And quality of life. 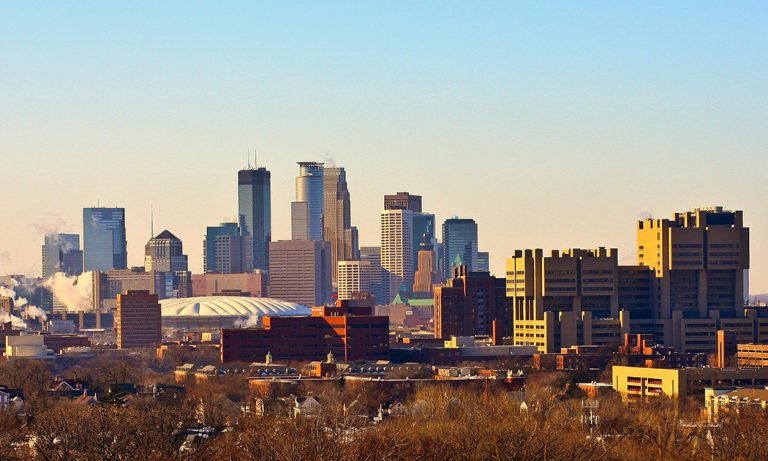 Minneapolis / Courtesy of Tony Webster under a CC 2.0 license.

Minnesota, the “Land of 10,000 Lakes”, is a great place for anyone to live. The state offers an abundance of outdoor recreation opportunities to residents and visitors, including water sports, skiing, hiking, and mountain biking, and some of the best cities to live in the country are housed inside the borders of the North Star State.

However, as the home of Mayo Clinic, the University of Minnesota, and multiple Fortune 500 companies in the health care industry, Minnesota is a particularly great place to live for health care workers. Here are a few cities that offer a variety of opportunities to health care workers for education, employment, and a great quality of life.

Located only about an hour’s drive from Minneapolis, Rochester isn’t just a great place to live for health care workers. The city has earned the top spot in our Top 100 Best Places to Live for the last two years in a row as a city with a broad range of affordable housing options and a variety of advantages for entrepreneurs.

The Mayo Clinic is the city’s top employer and the first and largest non-profit medical practice in the United States. The clinic draws upwards of a million people per year to the city, and is also home to the Mayo Clinic School of Medicine. As if it wasn’t already the centerpiece of the city and its economy, the clinic launched its Destination Medical Center (DMC) initiative in 2013, aiming to make infrastructure improvements throughout downtown Rochester over the next decade with what DMC hails as the “largest public-private economic initiative in Minnesota and the catalyst for growth in Rochester.”

Aside from having lots of employment opportunities either directly or indirectly tied to the medical field, Rochester will collectively adapt to the growing population of millennials in the city over the coming decade as an expanded University of Minnesota-Rochester campus joins an already vibrant college community. You can expect the city’s already large collection of restaurants, bars, and other amenities to keep on growing!

This is Why Minnesota is the Perfect Place for Millennials

One of the “Twin Cities” of Minnesota, Minneapolis is the center of the state’s largest, most populated metropolitan area. The city is home to the University of Minnesota and Saint Mary’s University, both of which are partnered with local medical centers and are home to high-ranking health care programs, along with a variety of other colleges and universities. Meanwhile, the city also has seven hospitals, so there’s no shortage of opportunities for both employment and education for health care workers.

While the city has a lot of hospitals, Minneapolis grabbed the top spot on our 2015 list of the Top 10 Healthiest Cities as a city with lots of opportunities for outdoor recreation nearby.

“The lakes are a huge thing here,” says Taylor Jacopian, who recently moved to Minneapolis to pursue a Master’s in Nurse Anesthesia at Saint Mary’s University. “They are everywhere! I live by Lake Calhoun and the lake is always full of people paddle boarding, canoeing, and sailing.”

Active living is also encouraged inside the city.

“The city is very bike-friendly,” Taylor adds. “There is a huge path that goes through the city and there are bike lanes everywhere.”

Minneapolis has a bustling downtown district with a thriving music scene — no surprise, since acts like Prince and The Replacements called Minneapolis home. Downtown Minneapolis also has a large and diverse array of restaurants and bars.

8 Reasons You Should Move to Minnesota

The smallest on this list with a population of about 86,000, Duluth is another honoree on our 2017 list of the Top 100 Places to Live and another great city for health care workers. Located on the coast of Lake Superior, Duluth is ideal for anyone who wants to get in some beach time after the scrubs come off. If it’s too chilly for that (it is Minnesota, after all), the city and the surrounding area offers a slew of other outdoor recreation opportunities, from canoeing and fishing to kayaking and skiing.

The city has no shortage of amenities, though. One of 2015’s 10 Best Foodie Cities, Duluth has an ever-growing scene of independent restaurants, bars, and brewpubs. On top of that, if you’ve ever wanted to visit an all-freshwater aquarium, Duluth’s Great Lakes Aquarium is the only one in the nation.

Duluth is home to a satellite campus of the University of Minnesota School of Medicine. The Duluth campus was ranked #4 in rural medicine in 2016 by the U.S. News & World Report with 44% of the school’s alumni practicing in communities with populations under 25,000, making it a great program for aspiring health care workers who would rather ditch the city for less populous areas.

That isn’t to say that there aren’t plenty of employment opportunities in Duluth, however. The city’s largest employer is Essentia Health, the parent company of the St. Mary’s/Duluth Clinic health system. On top of that, St. Luke’s, another hospital network in the area, has two hospitals, 14 primary care clinics, and 25 specialty clinics.